Mother, 32, is walking months after she was given just weeks to live

Single mother, 32, given weeks to live ‘because her spine was collapsing and was too weak to support her head’ has life-saving £320,000 surgery in the US

A bed-ridden mother who was given just weeks to live is finally able to walk again after a life-saving operation stopped her spine collapsing.

Samantha Smith was told she would not make it past December because of her two conditions – Ehlers Danlos syndrome (EDS) and craniocervical instability.

The former is a connective tissue disorder causing her spine to collapse, while the latter means the muscles in her neck are too weak to support her head.

Miss Smith, of Rochdale, Greater Manchester, was warned the nerve damage would cause her body to ‘shut down’ and her backbone could ‘internally decapitate’ her.

Having given up all hope, Miss Smith, a former psychotherapist, started planning her own funeral, until she finally raised enough to pay for the procedure and after care.

Miss Smith, who endured fatigue, pain and seizures, and flew to Arizona in February to undergo spine stabilisation surgery.

Four months later, her life has done a ‘U-turn’, with her now being stable enough to walk her two children to school. 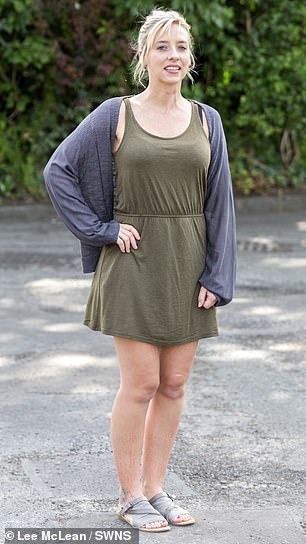 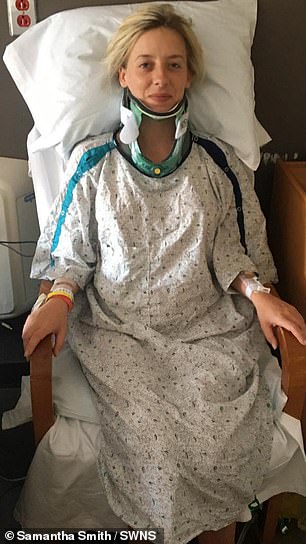 Samantha Smith (pictured left recently) is finally able to walk again after a life-saving operation stopped her spine collapsing. Miss Smith fundraised £320,000 ($402,415) to fly to Arizona in February for spine-stabilisation surgery that is not available on the NHS. She is pictured right after earlier surgery in Washington DC in August 2017 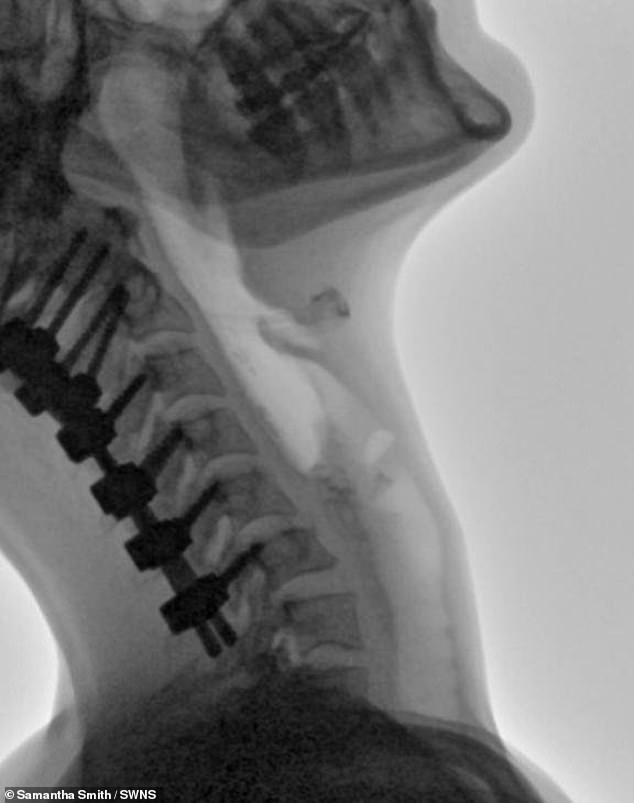 Miss Smith’s February operation is her fourth, and hopefully last, procedure. The scan shows her upper spine after surgery in August 2017. She suffers from Ehlers Danlos Syndrome, which affects the connective tissue and left her backbone unable to support her skull

Speaking of her condition, Miss Smith said: ‘Three months ago I was dying.

‘I went from being a businesswoman, author, columnist and single mum to barely existing in such a short space of time.

‘All I did was sleep and take medicine, I could barely manage an hour with my kids before falling asleep again.

‘I was bed-ridden and barely even conscious most of the time because of the pain and fatigue.’

Miss Smith previously claimed she was only officially diagnosed in August 2016, after being misdiagnosed eight times.

Ehlers-Danlos syndrome is the name for a group of rare inherited conditions that weaken connective tissue.

It is estimated one in 15 people develop CCI as a result of having EDS, due to the lack of tissue support at the craniocervical junction.

Forced to give up her private psychotherapy clinic, it was not long before she was unable to walk or even wash herself.

‘My short-term memory was non-existent,’ she said. ‘I had movement disorder, seizures and my heart was under great pressure due to autonomic dysfunction.’

Movement disorder is defined as a group of nervous-system conditions that cause involuntary ‘jerks’.

And autonomic dysfunction occurs when the nerves that control basic functions, such as heart rate and digestion, are damaged.

As well as the ordeal taking a huge toll on Miss Smith’s life, it also affected her children Jensen, 10, and nine-year-old Brooke.

‘I would force myself to crawl up the stairs to put them to bed each night,’ Miss Smith said. ‘It was petrifying.’ 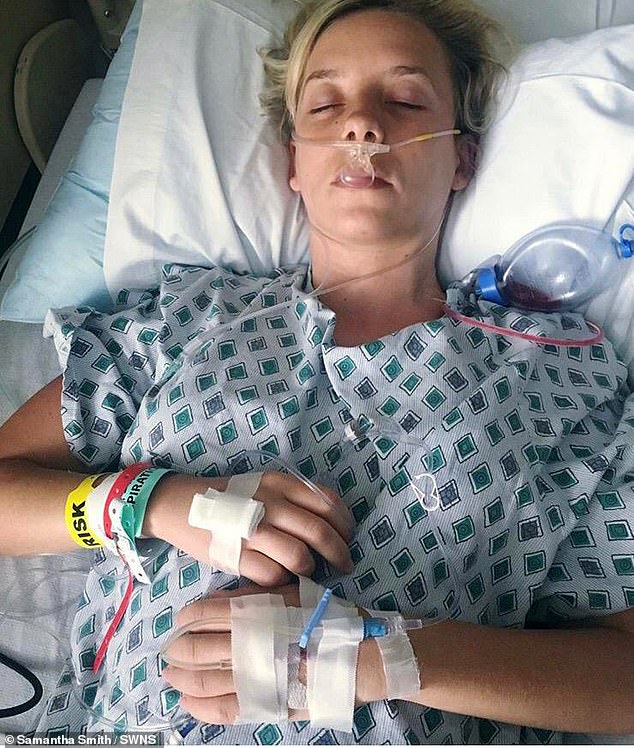 Miss Smith is pictured in Fairfield Hospital, Bury in Greater Manchester, after doctors declared she was at risk of decapitation when her spine collapsed in 2017 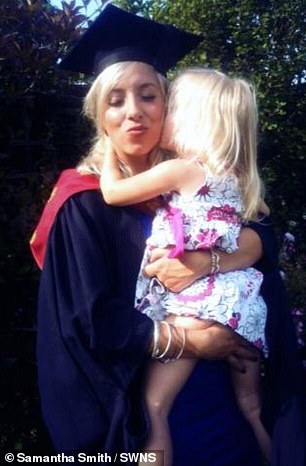 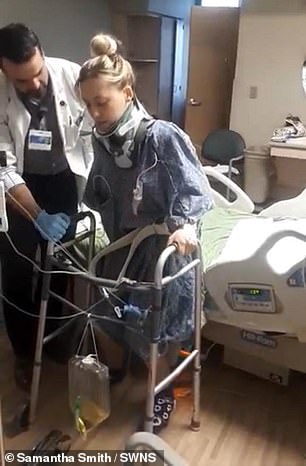 Miss Smith is pictured left with her daughter Brooke, now nine, at her graduation in 2010. She is also pictured right relearning how to walk in February after her procedure in Arizona 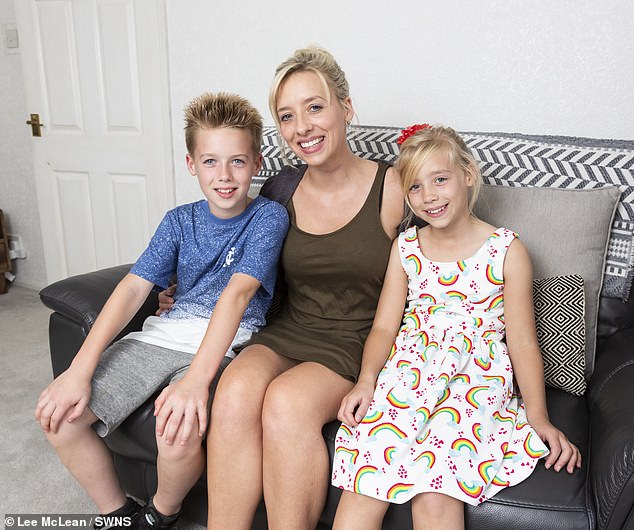 Before the operation, Miss Smith (pictured recently with her daughter and son Jensen, 10) could barely manage an hour with her children before she became too exhausted to cope. She would even have to force herself to ‘crawl’ up the stairs every night to put them to bed

WHAT IS EHLERS -DANLOS SYNDROME?

Ehlers-Danlos syndrome (EDS) is the name for a group of rare inherited conditions that affect connective tissue.

Research statistics of the Ehlers-Danlos syndromes show the total prevalence as 1 in 2,500 to 1 in 5,000 people, according to charities.

There are thirteen individual genetic conditions, all of which affect the body’s connective tissue.

Depending on the type of EDS, the faulty gene may have been inherited from one parent, or both parents.

Sometimes the faulty gene isn’t inherited, but occurs in the person for the first time.

EDS can affect people in different ways. For some the condition is relatively mild, while for others their symptoms can be disabling. Some of the rare severe types can be life-threatening.

There are several types of EDS that may share some symptoms.

These include an increased range of joint movement (joint hypermobility), stretchy skin and fragile skin that breaks or bruises easily.

Miss Smith’s February surgery in the US was her fourth, and hopefully last, of the past two years.

She first had ‘stabilisation of the neck’ in 2017, however, it ‘wasn’t aggressive enough’.

With her neck becoming increasingly unstable, her body later rejected a bone-marrow graft that was intended to strengthen her backbone.

She claims she was eventually forced to travel abroad for treatment due to the lack of help at home.

‘There was no care – no NHS support or knowledge,’ Miss Smith said.

Miss Smith managed to raise the money via a GoFundMe page, as well as auctions and raffles.

The money covered Miss Smith’s surgery, as well as living costs for her and her two children, and follow-up care.

The procedure is thought to involve the use of implants to hold the bones in a more fixed position.

Medics in the UK – both in the NHS and private hospitals – are said to refuse to operate due to the surgery being ‘too risky’.

‘Since the operation, everything has done a complete U-turn,’ she said. ‘It’s immense.

‘It’s only 13 weeks since the surgery but I’m back home living on my own with my kids. It’s an incredible feeling.

‘Just being able to walk my kids to school in the morning and take them to the cinema means the world to me. I have my life back.’

Miss Smith added: ‘Every day I tell myself out loud “I’m not dying”.

Although life has changed drastically for the better, Miss Smith claims she has PTSD due to the ordeal.

‘I’m grieving the life I lost but I’m overwhelmed with gratitude for the people who have chosen to support and save me over and over,’ she said. 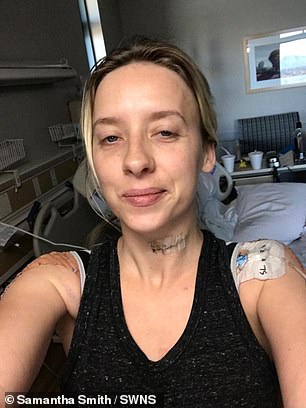 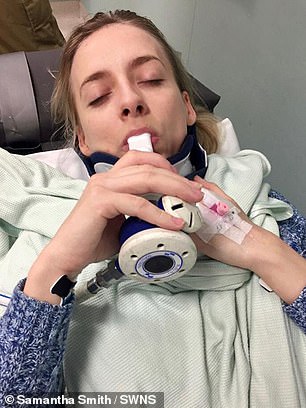 Pictured left in Arizona, Miss Smith claims she was ‘barely existing’ before. Miss Smith (pictured right at Fairfield Hospital in 2017) was ‘barely conscious most of the time’ due to the fatigue and pain her condition caused. She also claims her memory was ‘non existent’ 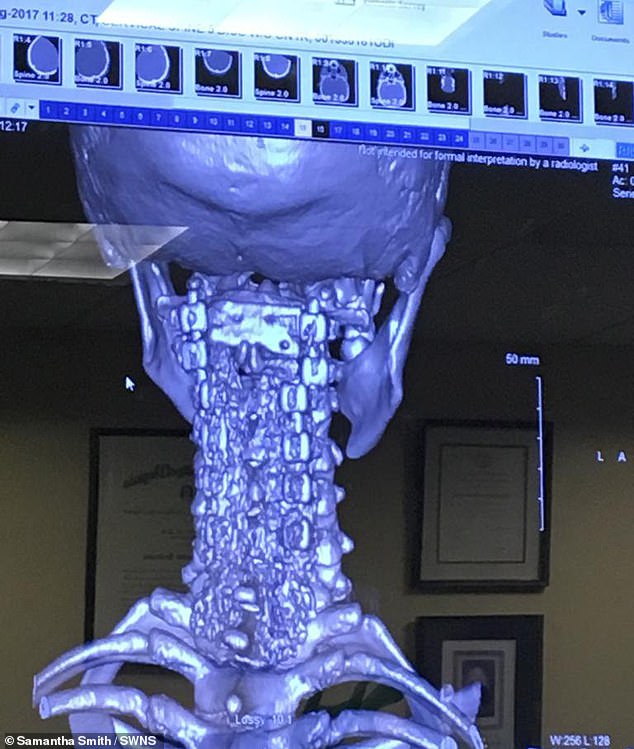 Miss Smith spends much of her time campaigning for EDS surgeries that are available in the US to be introduced on the NHS. She also set up the ‘Save Samantha’ EDS charity.

‘I would not be alive were it not for this surgery,’ Miss Smith said.

‘Nor would I be here today if it wasn’t for the many thousands of people who donated and continue to support Save Samantha campaigns.

‘So many people are affected by this condition and could be saved with the right treatment.

‘It’s not rare, it’s misdiagnosed and misunderstood. At the moment it’s not available on the NHS, this has to change.

‘Some people travel to the US to have it done, which is obviously really expensive. Others can’t afford it at all.’ 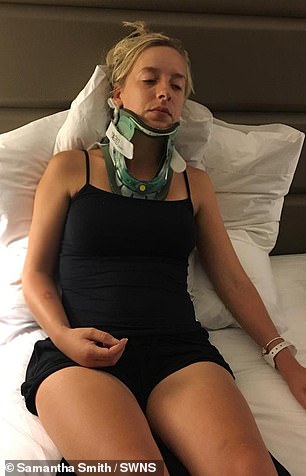 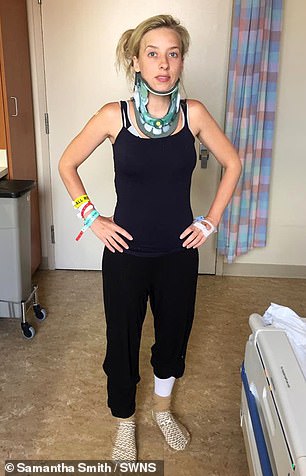 Miss Smith is pictured left recovering in Washington DC after her first surgery in July 2017. Surgeons placed titanium in her neck to give it more support. Miss Smith was able to stand soon after that operation (seen right) and had no idea how her health would plummet 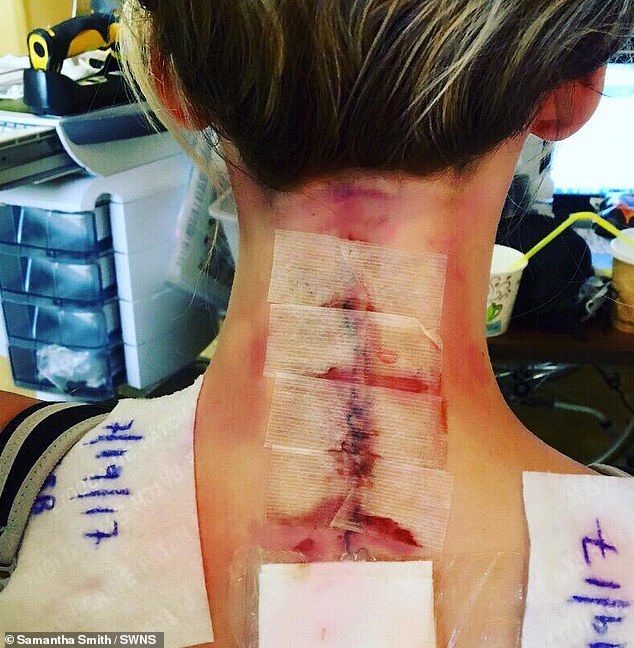