5 ways officials are enforcing coronavirus quarantines, from public humiliation to chasing people out of parks

Italy is racing to put in restrictive measures to keep citizens at home. Some ministers say they wish they'd brought in social distancing sooner — "I would have done them 10 days before," Walter Ricciardi, a World Health Organization board member and a top adviser to the Italian health ministry, told the New York Times.

While some countries are resisting fully restrictive measures, some regions are trying to heed Italy's warnings with strict rules to keep people at home.

Scientists still don't fully understand the virus, but what is clear is that the less people physically interact, the less opportunity the virus has to spread.

But as COVID-19 quarantine periods begin to stretch on longer and more people grow restless indoors, public officials across the globe are resorting to more creative methods of keeping people indoors to curb the spread of the pandemic.

In Italy's Lombardy region, the hardest-hit in the world with more than 63,927 cases as of March 23, people who stray more than 200 meters from their home will be fined $5,345. New York state, which now has more than 10,000 cases, will fine non-essential businesses that are staying open. In Colombia and Argentina, police have resorted to arresting people who have broken strict quarantine orders or chasing them out of public spaces.

Here are some examples of how countries are dealing with the situation:

Colombian officials publicly shamed a woman on national television for breaking her quarantine — and she now faces up to 8 years in prison. 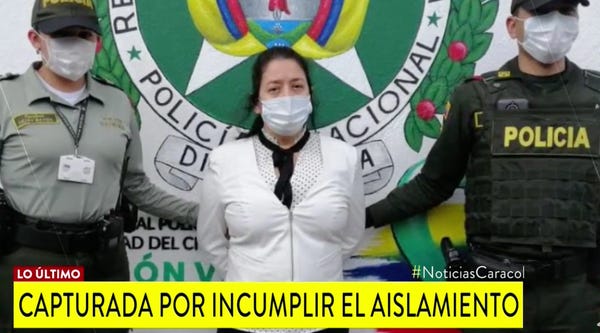 According to Noticias Caracol, a Colombian woman and her US-born husband arrived in Bogota last week from California. Given the state's outbreak of coronavirus, they were told to serve a two-week quarantine in a hotel.

But, days later, they were spotted drinking at a barbecue in a suburb of Bogota, and they were arrested by Colombian police officers.

The woman, a Colombian national, did not show any symptoms, but she was hauled onto a platform, wearing a surgical mask and handcuffs, flanked by military officers, in front of an audience of reporters and members of the media, as a warning to others who may have considered venturing outside.

She was told that she faced four to eight years in prison. Her husband, a US national, will face deportation back to the US and may have to pay a fine.

Days later, on March 20, Colombia entered a nationwide 19-day quarantine period to stop the spread of the virus according to Reuters. Government sources told the news wire that nobody, aside from medical personnel, security forces, and employees at grocery stores and pharmacies, will be allowed out of their homes.

Argentinian officials dressed in hazmat suits were seen chasing people through a park to get people to stay at home. 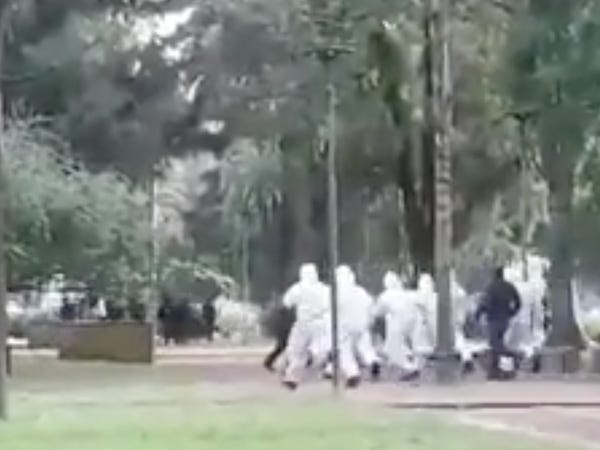 On March 20, Argentina suspended domestic flights and long-distance train and bus services within the country's borders according to Bloomberg.

The country has also taken creative measures to prevent people from congregating in large groups outside their homes in parks and other public gathering spaces.

A video surfaced on Reddit of Argentinian officials dressed in hazmat suits chasing young people through a park and arresting them from breaking mandatory quarantine orders.

Police have taken similar measures in the country's northern region, arresting 27 young people for gathering to play fútbol in a park in Chaco, according to Todo Noticias.

In Munich, fire engines are patrolling the streets with loudspeakers, telling people to stay indoors. 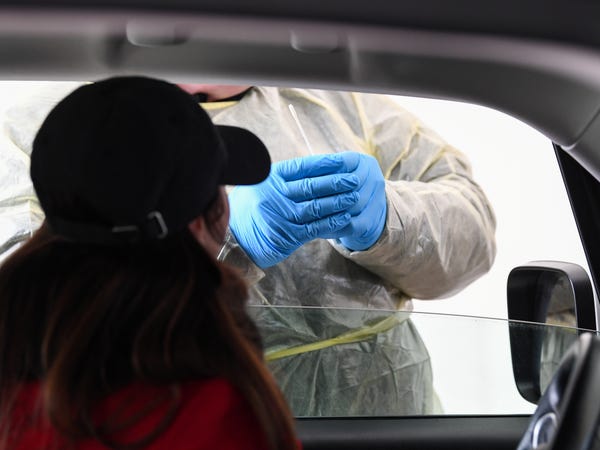 Germany shut down its shops, churches, and brothels to prevent the spread of the virus earlier in the month. Now, more measures are being taken to encourage social distancing and staying inside.

The country has implemented some of the strictest in the world after Chancellor Angela Merkel was informed a doctor she came into contact with tested positive for the coronavirus, including banning meetings of more than two people.

As of March 23, Germany had 28,865 reported cases of the coronavirus — one of the highest rates in Europe. New York State has the highest number of coronavirus cases of any US state — with 20,875 people infections and at least 157 deaths from the virus.

State governor Andrew Cuomo has advised all residents to stay inside and continue to engage in social distancing, warning young people that 54% of the state's cases are in people between the age of 18 and 49 years old.

"You can get the virus, and you can hurt people," he said during a Saturday press conference.

The governor also ordered all non-essential workers to stay home from work or risk "civil fines."

"There is no concept of social distancing while playing basketball. It doesn't exist," Cuomo said during a Sunday press conference. "You can't stay six feet away from a person playing basketball. You can, but then you're a lousy basketball player and you're going to lose. You just cannot do that."

In Lombardy, Italy — the epicenter of the country's coronavirus outbreak — residents can be fined $5,345 if they stray more than 200 meters from their homes. 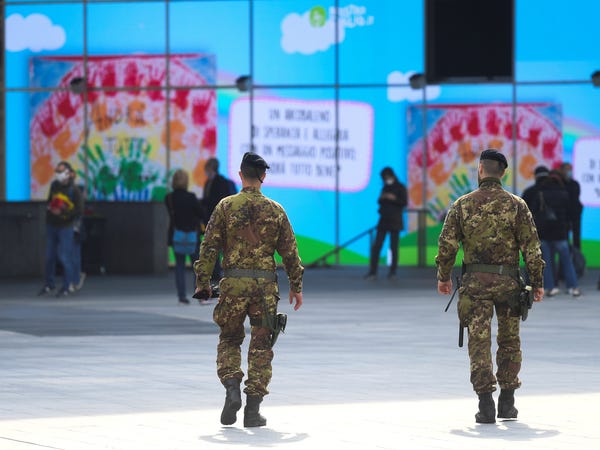 Lombardy, Italy — the epicenter of the country's coronavirus outbreak — has taken drastic measures to stop the spread of the virus as hospitals have become filled to the brim with patients.

In addition to a "shelter-in-place" directive, residents also have strict limitations on how far they can wander from their homes for even solitary activities like jogging and dog walking, according to the New York Times.

On Sunday, an order was issued only allowing people to venture 200 meters from their homes. Those who violate the order could risk having to pay a fine of $5,345 in exchange.