Act now or babies will DIE: Charities beg firm behind a ‘miracle £450,000 drug’ for crippling genetic condition to work with NHS to make it available

Babies with a rare genetic condition will needlessly die unless a drug branded a miracle is urgently approved on the NHS, charities have warned.

Spinraza is proven to reverse spinal muscular atrophy, which kills most sufferers battling the most severe form before they reach their second birthday.

Health officials have been locked in negotiations for over a year in trying to get the drug – estimated to cost £450,000 per patient per year – made available on the NHS. 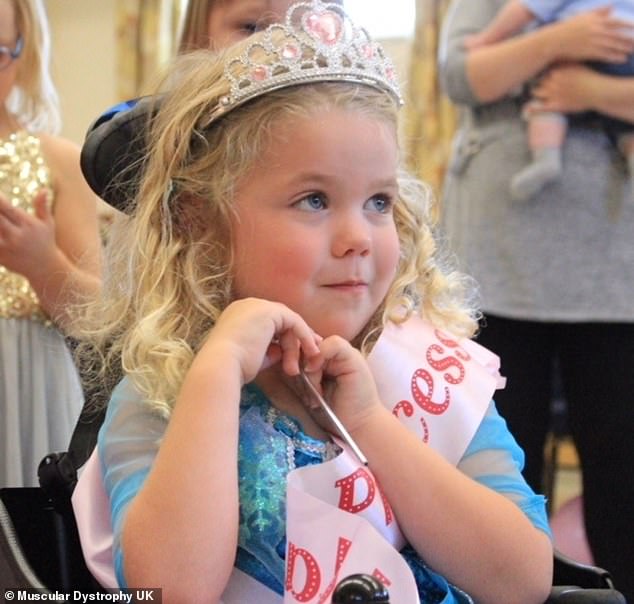 Rachel Jamieson’s four-year-old daughter, Matilda, has SMA Type 3. This form of the condition does not affect life expectancy, but leaves children less able to stand and walk over time

‘The stark reality is some children will die without access to Spinraza.’ The drug is made by Biogen, a Massachusetts-based pharmaceutical firm.

Ms Woodhead said no more time can be wasted, adding: ‘This is devastating for families, who know there is a treatment that could help but is agonisingly out of reach.

‘In the 16 months it has taken for this drug (also known as nusinersen) to be assessed, lives may needlessly have been cut short.’ 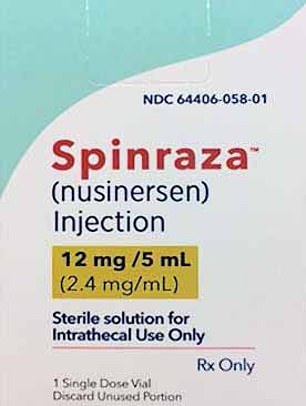 Spinraza is proven to reverse spinal muscular atrophy, which kills most sufferers battling the most severe form before they turn two

She added that, in the meantime, children and adult sufferers may also have lost the ability to walk, breathe and swallow because of there being no approved drug.

Ms Woodhead added: ‘The Government must recognise the system is broken and urgently act to overhaul the appraisal process for treatments for rare diseases.

‘But right now, NICE, Biogen and NHS England must end families’ heartbreak by showing flexibility on cost and coming to an agreement urgently.’

Spinal muscular atrophy is a genetic condition which causes nerves and muscles to deteriorate. It affects around 1,300 Britons.

The worst form of the muscle wasting condition – type 1 – affects one in 10,000 children and kills them all before their second birthday.

Spinraza works by fixing the faulty gene, causing the body to read DNA differently and produce more of the proteins needed to build nerve cells.

SMA symptoms include floppy or weak arms and legs, difficulty sitting up, crawling or walking, swallowing problems and breathing difficulties.

A mother has today said it is ‘unthinkable’ that patients with spinal muscular atrophy are still unable to access Spinraza.

Dr Sheonad MacFarlane’s daughter, Eilidh, 10, has SMA type 2. She is able to get the drug because it is approved for use in Scotland.

However, Dr MacFarlane, from Glasgow, said her heart goes out to families in England, Wales and Northern Ireland who can’t the drug.

She said: ‘I just hope NICE can reach a decision soon.

‘Having access to Spinraza means so much to us and to other families; we are overjoyed that Eilidh now has access to this treatment.

‘We still don’t know what the future holds, but we, at last, have hope. As a parent, it’s heart-breaking to see your child gradually lose their physical abilities.

‘Nothing can prepare you for the devastating emotional impact this has on you, particularly when there is a treatment out there.’ 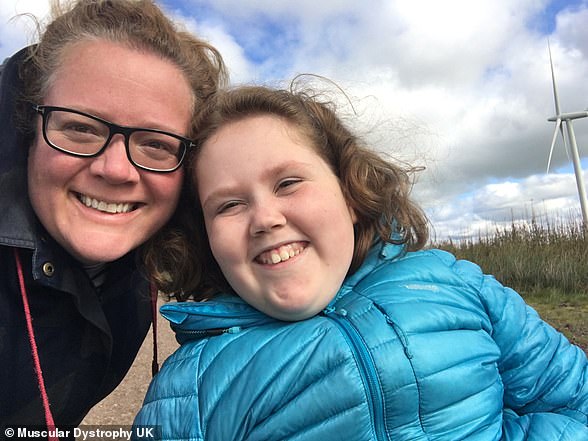 Dr Sheonad MacFarlane’s daughter, Eilidh, 10, has SMA type 2. She is able to get the drug because it is approved for use in Scotland

This form of the condition does not affect life expectancy, but leaves children less able to stand and walk over time.

Ms Jamieson, from York, said: ‘My heart breaks when my gorgeous, bubbly daughter Matilda asks me why she has wobbly legs, or whether her children will have SMA.

‘Since starting school last year, Matilda has struggled more with her mobility. I believe that, if she had received Spinraza, she would not be having those difficulties.

‘Spinraza gives us hope, but we need it to be made available – and fast. Without this treatment, I fear for Matilda’s independence when she’s older.’

National Institute for Health and Care Excellence (Nice), which decides which drugs the NHS should pay for, last August said Spinraza is not value for money.

In draft guidance, it said it did not recommend dishing out the drug because of ‘uncertainties over its long-term effectiveness and its extremely high cost’.

And the body added that ‘even with a proposed confidential price reduction the cost of nusinersen is too high for it to be considered a cost-effective use of NHS resources’.

Spinraza is available in 24 European countries and 46 globally, including Scotland and the US.

He said: ‘SMA patients have been let down and now we are essentially the last country in the civilised world to adopt this drug.

‘Spinraza is an effective treatment for SMA but, once the condition has progressed in its course, children are unable to regain lost function.

‘As a physician, there is nothing more frustrating than knowing a medicine that can help your patients in England is out of reach, while it’s available in Scotland.’

WHAT IS SPINAL MUSCULAR ATROPHY?

Spinal Muscular Atrophy (SMA) is a disease that weakens a patient’s strength by affecting the motor nerve cells in the spinal cord.

Those affected never gain the ability to walk, eat or breathe.

SMA is the number one genetic cause of death for infants.

It is genetic and passed from parent to child.

There are four primary types of SMA—I, II, III and IV, which are based on age of onset and the physical milestones achieved.

Professor Muntoni added: ‘NICE, Biogen and NHS England must come to a compromise and make this drug available.’

‘I urge Biogen, NHS England and NICE to complete negotiations by 8 May with a Managed Access Agreement for all with SMA Types 1, 2 and 3.

‘As each week rolls by without access to this life-changing treatment… newly diagnosed babies are left with a very uncertain future.’

Biogen turned down an opportunity to apologise when approached by MailOnline and declined to offer a more detailed statement.

A spokesperson for the firm said: ‘Biogen shares the deep frustration of families and patients with this delay.’

They added that the company is ‘working tirelessly’ alongside Nice and NHS England to find a resolution to allow all SMA patients access to Spinraza.

Biogen gives 80 children in England, Wales and Northern Ireland battling SMA type 1 the drug for free as part of an access programme.

That scheme closed on November 1 last year to all patients who were diagnosed after that date, however, the children still receive the drug.

NHS England has yet to respond to a request for comment from MailOnline. But Nice said Spinraza will be discussed in private next week.

A spokesperson said: ‘We have been informed by the parties that no agreement has yet been reached.