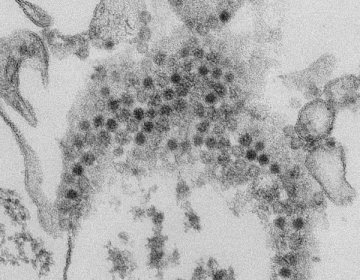 Acute flaccid myelitis (AFM) presents significant challenges not only to patients but also to researchers, and efforts must be accelerated to learn more about the condition, experts from the National Institute of Allergy and Infectious Diseases (NIAID), part of the National Institutes of Health, write in a new perspective published in mBio.

AFM is a condition associated with a recent infection, including those caused by polioviruses or non-polio enteroviruses, that causes sudden muscle paralysis. Polioviruses were once the major causes of AFM but now account for almost no cases because polio is nearly eradicated worldwide. There is no vaccine to prevent non-polio AFM, and no specific treatment is currently available to cure the condition. However, evidence indicates that early intensive physical therapy, which has helped patients with polio improve, may benefit other AFM patients, and should be considered as early as possible for children with AFM symptoms, according to the authors.

The authors note that the term AFM was coined in recent years, but the condition itself represents a subset of cases of a long-recognized syndrome called acute flaccid paralysis. AFM unexpectedly re-emerged globally in epidemic form in 2014 and appears to occur at the same time and locations as outbreaks of the once-obscure enterovirus-D68 (EV-D68), which causes respiratory illness that is typically mild, and EV-A71, another enterovirus. Experts have yet to prove definitively that EV-D68 is a major cause of epidemic AFM. However, the epidemiological evidence implicating the virus is growing, the authors explain.

Many questions remain unanswered regarding the factors driving AFM re-emergence, including whether epidemic AFM results only from widespread epidemic circulation of viruses such as EV-D68 and EV-A71, or because these viruses are rapidly evolving to become more pathogenic. Outbreaks of AFM also have occurred in areas where children already have developed neutralizing antibodies to EV-D68. The authors note that individual immunity to other circulating enteroviruses may drive EV-D68 to evolve, perhaps explaining this confounding observation.

AFM research efforts are limited by the sporadic occurrence of cases, the difficulty in diagnosing viral infection possibly linked to AFM cases, and the lack of understanding of the condition’s natural history and pathogenesis. The authors call for concerted research to develop non-polio enterovirus-specific diagnostics, epidemiological studies, and animal models to study the neurological manifestations of enteroviruses and to develop drug therapies. They stress the importance of this research as the past trajectory of cases indicates the problem of AFM will likely get worse.