At $14 for a loaf, surely this is peak sourdough

Autumn’s bounty was displayed on the farmers' market stalls in the late April sunshine: red onions as big as baseballs, pumpkins as big as really big pumpkins, bags of jalapeños and tiny black chilli peppers. At the till – an old biscuit tin beside a set of digital scales – a young woman was agonising over some mental arithmetic while her stallholder boss looked on, just restraining an eye roll. 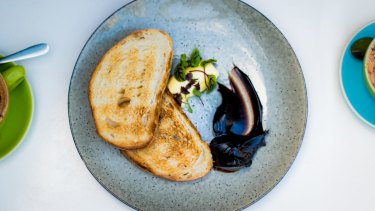 Somewhere else in Melbourne a family was probably toasting slices of supermarket Wonder White…Credit:Simon McCarthy

When she spoke, her French accent and tentative English – “Nain dolleurs ferty?” – gave her away: another backpacker, fresh off the plane for a spot of WOOFing in the outer suburbs of Melbourne.

She fumbled with the unfamiliar plastic banknotes and odd, hexagonal coins, examining each one as if it were from Mars. “’ave a good Easter,” she said when she finally handed over my change.

I caught another French accent at the bread stall, a post-Notre-Dame theme emerging in the weekly veggie shop, and in the bread, too, which seemed to be from a French-ish artisan sourdough bakery: rough baguettes, campagne-style white loaves and an enormous pagnotte, or whatever you call a wagon-wheel of bread in French.

“Single what?” I replied.

“Single origin,” she continued. “Red wheat from one farm on the Mornington Peninsula. Just down the road.”

The loaf cost $14. Melbourne had reached peak something, although I wasn’t sure what.

How could I refuse ’alf? “We’ll take the other half,” said the couple in the queue behind me as she began sawing it into two unequal pieces.

“You can eat it for breakfast tomorrow with a single-origin coffee,” I mused, and looked away politely while she bagged the smaller piece for me. I handed over exactly half of $14.

I felt a vague unease. Somewhere else in Melbourne a family was probably toasting slices of supermarket Wonder White fortified with extract of pulverised chicken feathers for their breakfast. Food inequality was clearly at work in my own city, and I wondered whether we were living in a society that can no longer find the middle ground.

The other question is: does baking bread with wheat from a single farm on the Mornington Peninsula make a better loaf, everything else being equal?

I don’t know the answer. But the crumb on my single-origin red wheat pagnotte was dense and moist, and the crust was chewy and burnt-caramel sweet: it was the most ethical, artisanal – and delicious – loaf of bread I have eaten in a very long time, and worth every centime I’d paid for it.

Matt Holden is a regular columnist.