Cities are just as good for happiness as the countryside, study finds

Cities can boost happiness just as much as the countryside – as long as they are scenic, according to experts.

But in the first study of its kind, scientists found areas with lots of old buildings but not much green space can be just as good for our wellbeing.

And the effect could be the same regardless of the weather, how wealthy the area is, the activities that take place there and the day of the week.

Scientists said the findings should inform governments on how to make areas more aesthetically pleasing. 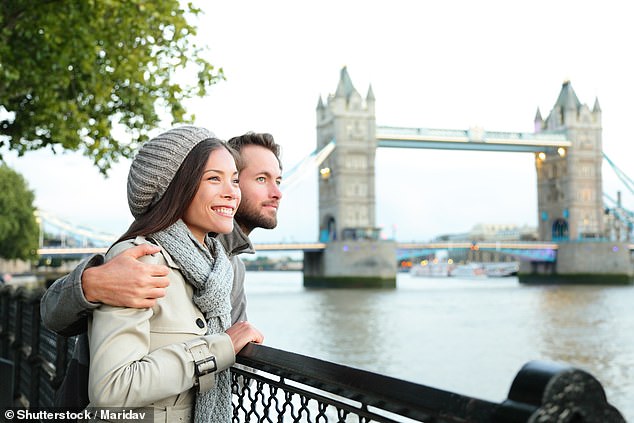 Cities with churches and towers can boost happiness just as much as the countryside as long as it is scenic, experts at the University of Warwick have said

Ultimately, the scientists led by University of Warwick said people are happier in beautiful settings, whether in natural or built-up places.

The team, led by researcher Chanuki Illushka Seresinhe, said: ‘We find that people are indeed happier in more scenic environments, even after controlling for a range of variables such as potential effects of the weather, and the activity that an individual was engaged in at the time.

‘Crucially, we show that it is not only the countryside with which we see this association.

‘Built-up areas, which might comprise characterful buildings or bridges, also have a positive link to happiness.’

The researchers analysed nearly one million ratings of photographs of Britain from an online game called Scenic-Or-Not.

The researchers combined the data with three years of measurements from more than 15,000 users of the iPhone app Mappiness.

Mappiness asks people to report on their happiness multiple times per day while recording their current location, who they are with and what they are currently doing. 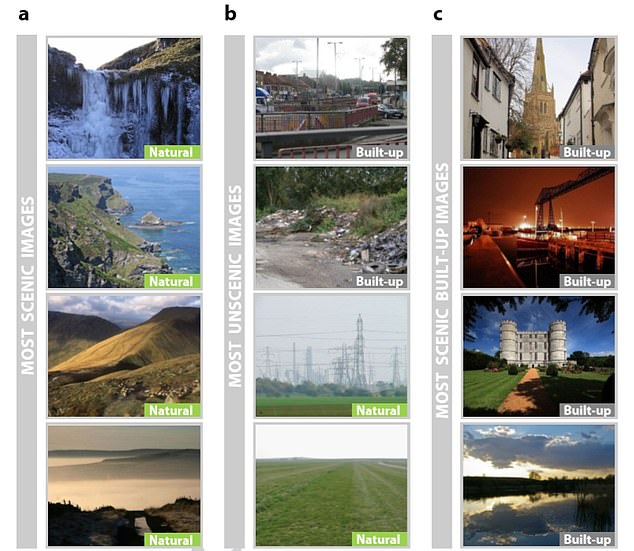 To determine whether individuals are happier in more scenic environments, the team considered a range of factors that may also play a part.

Growing up in the countryside may protect your mental health as an adult, research by Aarhus University in Denmark suggests.

A study of nearly a million Danes found youngsters who live in green spaces are up to 55 per cent less likely to develop a mental-health disorder in later life.

This then improves a child’s cognitive development, which may positively impact their mental health.

Results – published in the journal Proceedings of the National Academy of Sciences -revealed people who grew up surrounded by lots of green space were less at risk of a mental-health disorder.

This remained true even after adjusting for socioeconomic status, urbanisation and a family history of mental-health problems.

Rain can reduce happiness, while higher temperatures, sunshine and bank holidays are associated with increased happiness.

However, the authors said: ‘We find that people do report themselves to be happier when in a more scenic location, even after controlling for weather, activities, companionship, weekdays or weekends.’

Although natural elements such as ponds, rivers and forest paths improved ratings on a photograph, so did churches, cottages and towers. And sometimes, big open spaces had negative ratings.

‘This research could be useful for informing decisions made in the design of our towns, cities and urban neighbourhoods, which affect people’s everyday lives’, the authors said.

The findings go against previous research that suggests people who live in rural areas are happier than city dwellers.

A study last May by McGill University in Montreal and the Vancouver School of Economics surveyed 400,000 people across Canada using a widely-recognized happiness scale.

However, that meant nothing in terms of joy: people who lived in the countryside were, on average, eight times happier than people in urban areas.