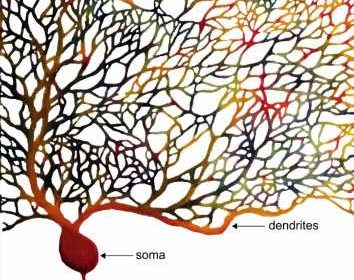 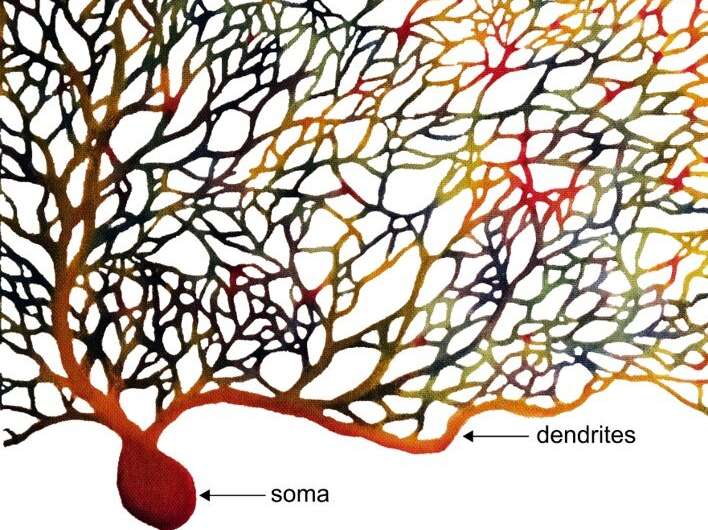 The human brain is jampacked with neurons—86 billion of them—connected in a vast, complex network that controls how we move, think, talk and make memories. Vital information is exchanged across this network through trillions of connection points, called synapses. Every neuron is continually bombarded with thousands of signals via these synapses—some important and some unimportant—but scientists still don’t fully understand how the receiving neuron extracts the relevant information.

“This is known as the “signal-to-noise” problem, and it’s been the object of study by neuroscientists for the last 50 years,” said Bernd Kuhn, who leads the Optical Neuroimaging Unit at the Okinawa Institute of Science and Technology Graduate University (OIST). “Past research has given us the view that each neuron functions as an individual computer, making decisions about how to respond to these signals by themselves, but pinning down the exact mechanisms used to achieve these computations has proven a real technical challenge.”

Previously, researchers used slices of brain tissue to study how neurons responded to these simultaneous signals, but this method is “like looking at the tip of the iceberg,” the research team remarked.

However, in 2018, the OIST Optical Neuroimaging Unit developed a powerful new technique, using two-photon voltage imaging, that can reveal the 3D structure of neurons and detect their electrical activity in a minimally-invasive way.

Now, for the first time, this technique has allowed researchers to tackle the “signal-to-noise” problem in awake animals, rather than in slices of brain tissue. Their findings were reported in eLife.

“Working with responsive animals provides a whole new level of detail about the processes that are happening within the brain,” explained first author, Dr. Christopher Roome, a staff scientist in the Optical Neuroimaging Unit. “When you work with brain slices, you have to electrically stimulate isolated neurons—so these are not real-life signals. Whereas in a living animal, you have thousands of natural inputs to the neurons, including both spontaneous signals that the neuron must filter out, and evoked signals generated in response to sensory stimuli that the neuron must react to. So, you can start to see all the different ways that the neurons process and differentiate these signals.”

In the study, the team used mice to study one specific type of brain cell, the Purkinje neuron, which is found in the cerebellum—the part of the brain involved with controlling movement.

Purkinje neurons receive signals from parallel fibers and climbing fibers: the axons of two other types of neurons. Each Purkinje neuron is connected to only one climbing fiber, which provides powerful inputs that researchers believe help the animal to learn and refine movement.

On the other hand, Purkinje neurons are each connected to around 100,000 parallel fibers, which provide detailed information about the position of the body and any objects outside the body that the animal is trying to interact with.

The scientists administered small puffs of air to the eye of an awake mouse, triggering a blinking reflex and causing multiple signals to be transmitted to the Purkinje neurons. They monitored how the Purkinje neurons responded as they received these signals from the parallel and climbing fibers.

The OIST research team found that one of the ways that the Purkinje neurons responded to signals resulting from the air puff, called evoked signals, was through dendritic spikes. These are electrical impulses—or action potentials—that occur only within the dendrites.

“Typically, we think of neurons receiving inputs to the dendrites, which then sums up all the signals. If a certain threshold is reached, then an action potential is generated and transmitted down the axon,” explained Prof. Kuhn. “But it’s actually a little more complicated than that—if a signal is strong enough, action potentials can also occur in the dendrite and stay localized at that area of the dendrite.”

Previous research has shown that individual powerful signals from a climbing fiber can induce these dendritic spikes, but this was the first time that researchers saw local dendritic spikes occur when Purkinje neurons received evoked signals from multiple parallel fibers at the same time.

In contrast, the researchers rarely saw dendritic spikes occur when the Purkinje neurons received spontaneous signals at random times, showing that the neuron used dendritic spikes to differentiate true signals from the noise.

It’s still unclear what the effects are from the dendritic spikes, but the researchers believe that it may change the Purkinje neuron at a very local level. “One possibility is that it may change the strength of the synapses in that area, without affecting any other synapses of the neuron,” said Dr. Roome. “This is important as it means that the computational power of the neuron increases dramatically, as different parts of the dendrite can carry out these calculations independently.”

Changes in the strength of individual synapses are thought to be an important mechanism for learning, as the effects are longer-term than short-lived action potentials.

Moving forward, the research team are delving deeper into whether the mechanisms for responding to simultaneous signals aid memory and learning.