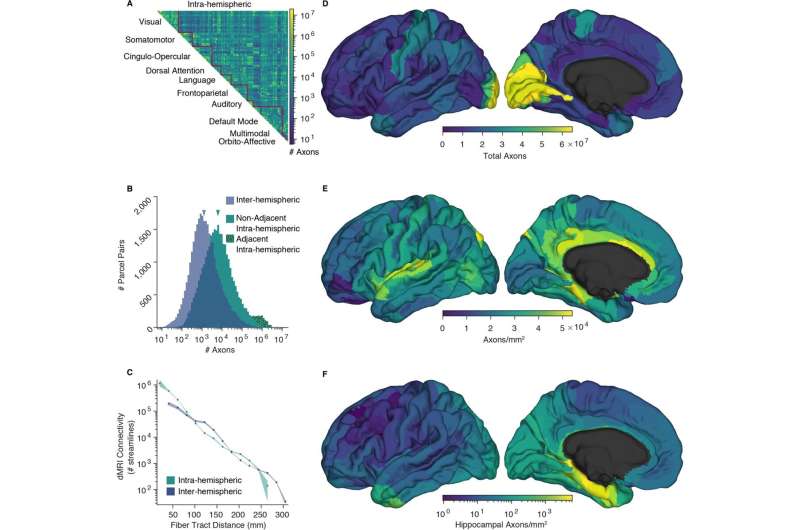 Understanding how the brain functions, particularly how information is processed during different activities, is difficult without knowing how many axons are in the brain and how many connect different functional regions. An approach by Burke Rosen and Eric Halgren at the University of California, San Diego, U.S. published March 24 in the open-access journal PLOS Biology, shows that despite the functional importance of connections between far-reaching regions of the brain, the actual number of these connections is low.

In the new study, researchers combined diffusion MRI data from the Human Connectome Project with histological cross-sections of the corpus callosum, the major tract that connects the left and right sides of the brain. The Human Connectome maps the strength of all connections in the brain but does not provide the actual number of axons, while the histological cross-sections allow estimates for how many axons are packed into a given volume. Combining the connection strengths with the axon densities yielded estimates for the number of axons in the cerebral cortex.

The analysis indicated that there are almost 2.5 billion long-range axons traversing the cerebral cortex. However, despite this large number, they found that the numbers connecting different functional brain regions were quite low. For example, among the estimated 130 million axons in the arcuate fasciculus tract, only about 1 to 2 million (less than 2%) directly connected Broca’s and Wernicke’s areas, a connection that is necessary for normal language ability. The model predicts that other long connections, like those from the hippocampus to the frontal cortex that are needed for memory retrieval, are actually made in multiple steps. The findings will thus improve models of cognition, especially processes that rely on connections between distal regions of the brain.