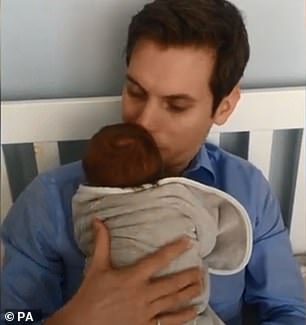 A heartwarming video shows the moment a father-of-two was able to kiss his newborn baby for the first time – after chemotherapy left him with ‘toxic’ saliva.

Craig Fountain, 32, from Suffolk, was forced to live in a bizarre form of self-imposed quarantine after being diagnosed with bowel cancer in September 2018.

Doctors flooded his body with drugs to fight the deadly disease, but this left him unable to be intimate with his pregnant wife, Elisabeth, for fear of harming their unborn child, Lottie, who was born in January.

He even had to keep away from their other daughter, two-year-old Rosie.

But now, after successfully completing the gruelling treatment, the proud father has embraced his family for the very first time.

‘Having cancer and going through chemo is tough, but by far the hardest part was not being able to be intimate with my wife,’ Mr Fountain said.

‘It felt as though all of a sudden there was a barrier placed between Elisabeth and me, like we were having a relationship from afar, and that can have quite a negative impact on a relationship.

‘Even silly things like giving her a kiss before going off to work or going to sleep at night was something I started to really miss like mad.’

He added: ‘Kissing is such an important part of bonding with a newborn baby and I wanted so badly just to give Lottie a big kiss.

‘The first time I was able to kiss her was such a wonderful and poignant moment for me and just goes to show that some things are worth waiting for.’ 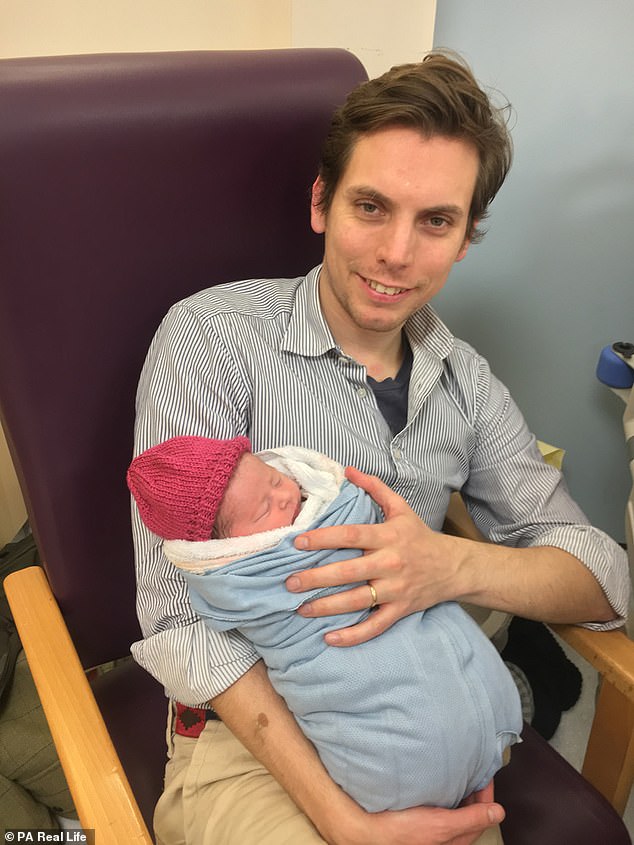 Long journey: The 32-year-old, from Suffolk, struggled to keep his distance from his adorable baby, who was welcomed into the world in January 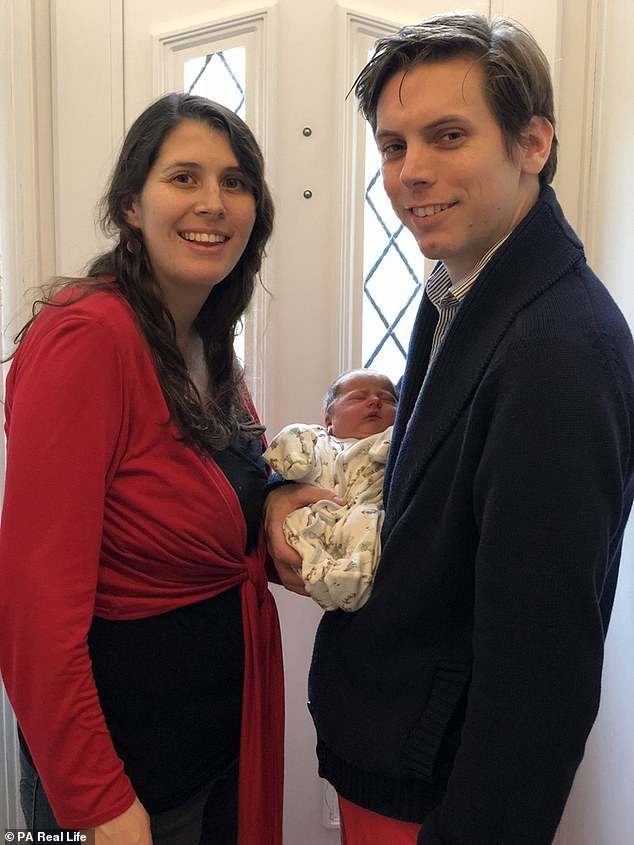 Mrs Fountain, who met her husband eight years ago through friends, was pregnant when he became concerned about his health in July 2018, after noticing blood in his faeces.

Initially passing it off as a gluten intolerance, he did not visit his GP until he had suffered progressively worsening symptoms for six weeks.

‘It would vary from a few small clots of blood to the whole of the toilet bowl turning pink, but over time the blood became darker and it was clear that it was coming from somewhere quite deep inside me,’ he said.

‘That’s when I realised that I really needed to get checked out.’

Visiting his GP in late August, who noted tenderness in his lower abdomen, he was advised that he most likely had inflammatory bowel disease, but was told to give blood and stool samples.

At that stage, told he was unlikely to have bowel cancer as he was ‘far too young,’ Mr Fountain was not too concerned – especially when his test results failed to reveal anything untoward.

But, when he pushed for further investigations to diagnose the cause of his bleeding, a sigmoidoscopy – a procedure allowing doctors to view the large intestine through the rectum – revealed that the expectant father did in fact have bowel cancer.

With the diagnosis confirmed on September 19, four months before his wife was due to give birth, his ‘world was turned upside down’. 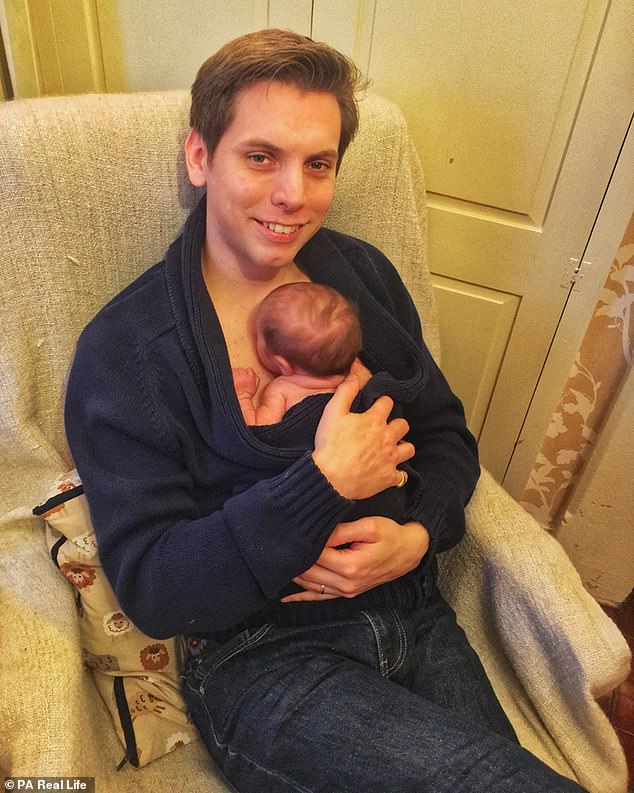 Magic moment: Craig and Lottie hugging after 12 weeks of chemotherapy for the first time 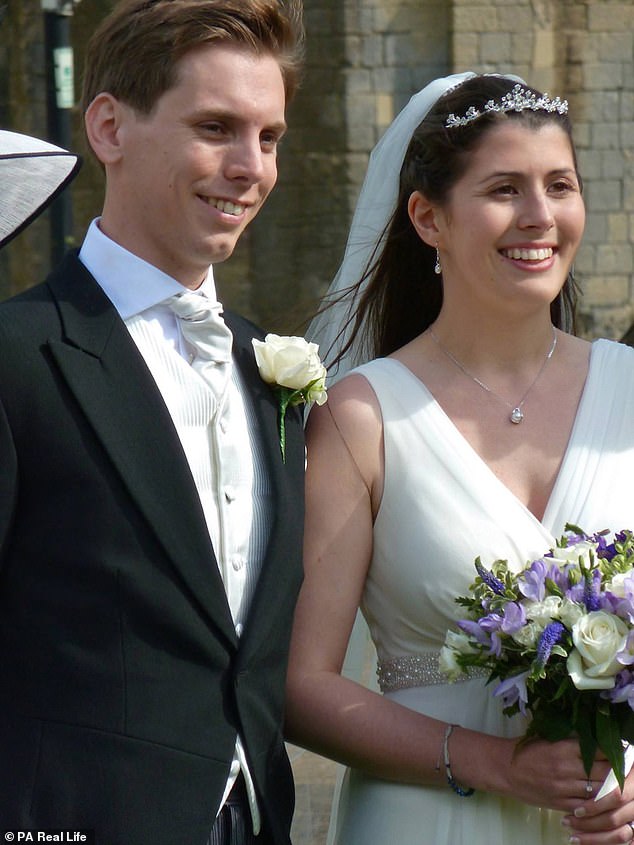 Risk: Mr Fountain’s wife was pregnant when he became concerned about his health in July 2018, after noticing blood in his faeces – but the diagnosis came several months later

‘It was like having someone hit you over the head with a cricket bat and I walked around in a complete daze for hours,’ he said.

‘My first thought was, “What are my poor family going to do? Is my wife about to have to raise two children on her own?”

‘But then I knew that I was going to have to be strong and make sure I did whatever it took to get through this and out the other side.’

After a CT scan showed that Mr Fountain had cancerous polyps on the large bowel, he had a subtotal colectomy at West Suffolk Hospital in Bury St Edmunds – a four-hour operation, during which his large colon was removed and his rectum was stapled to his small intestine.

Then, six weeks later, in early December, he was put on a 12-week course of chemotherapy and was told by his oncologist that he should not have unprotected sex with his wife, or even kiss her, because of the risk of cross-contamination, which could harm the foetus.

‘It was tough as we are a very cuddly couple and always have been,’ he said, who, with his wife, moved back to her parents’ house in the weeks after surgery as a place to recover.

‘But Elisabeth, who has a medical background through her work as a vet, was so supportive, despite being heavily pregnant,and would pick up the slack – doing washing, cooking and cleaning – when I was too unwell to do anything.’

Then, on January 29, she had Lottie’s birth induced, to coincide with a week when Mr Fountain was not having chemo, so he could be there and give her the support she needed. 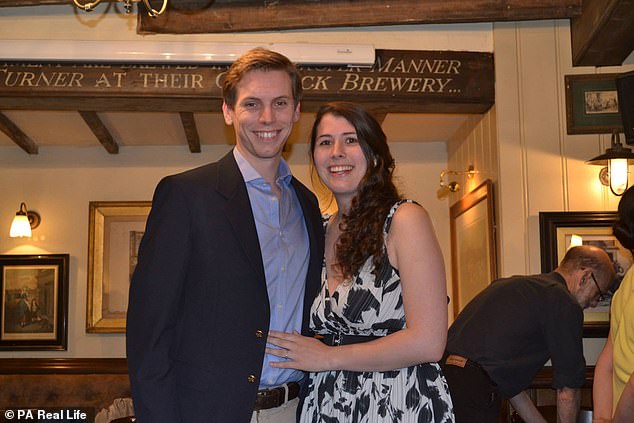 ‘It was one of the most poignant moments of my life,’ said Mr Fountain, who is currently waiting for tests that will confirm whether or not he is in remission from cancer

Welcoming their second child into the world, the couple were overjoyed, although, with a month of treatment still to go, he knew he would have to wait before he could give his daughter a kiss.

And on February 24, six days after his final chemo dose, he was finally able to kiss Lottie without fear of damaging his precious newborn.

‘It was one of the most poignant moments of my life,’ said Mr Fountain, who is currently waiting for tests that will confirm whether or not he is in remission from cancer.

‘It felt like life was finally coming good again after so many months of unhappiness and fear.

‘Now, I’m looking forward to the future and to living the life that was almost ripped away from me.’

Rob Glynne-Jones, consultant clinical oncologist and medical advisor for Bowel Cancer UK, said: ‘Some chemotherapy drugs can be passed on through saliva or bodily fluids.

‘Because of their toxicity, some doctors recommend avoiding intimacy, such as kissing or sex, for a few days after having chemotherapy.

‘However this advice is really dependent on what type of chemotherapy you are taking.

‘That’s why it is best to discuss any concerns about chemotherapy and sex with your doctor, who’s familiar with your individual situation.’

What is bowel cancer and what are the symptoms?

Bowel, or colorectal, cancer affects the large bowel, which is made up of the colon and rectum.

Most cases have no clear cause, however, people are more at risk if they:

More than nine out of 10 people with stage one bowel cancer survive five years or more after their diagnosis.

This drops significantly if it is diagnosed in later stages.

According to Bowel Cancer UK figures, more than 41,200 people are diagnosed with bowel cancer every year in the UK.

It affects around 40 per 100,000 adults per year in the US, according to the National Cancer Institute.