From ‘stay at home’ to ‘on yer bike’! Sir Chris Whitty urges Britons to fight war on obesity by cycling

England’s chief medical officer warned many aspects of public health had ‘either trodden water or even gone backwards’ over the last two years – including levels of obesity.

A quarter of children aged 10 were obese during the first year of the pandemic, up from a fifth in 2019, NHS England data shows.

And three-quarters of adults in the country were overweight or obese before Covid emerged.

Despite exercise being one of the ‘most effective ways of improving health’, Britons are cycling at less than a quarter of the level of their grandparent’s generation, Sir Chris said.

Active transport, such as cycling to work, adds activity into people’s normal routine, he said.

Sir Chris told the Local Government’s Association public health conference: ‘I think there’s often a feeling that it’s going to be very hard work to get people to, for example, take up cycling.

‘But if you went back to the ’50s and ’60s there were extremely high rates of people cycling for work as well as recreationally across the country.’ 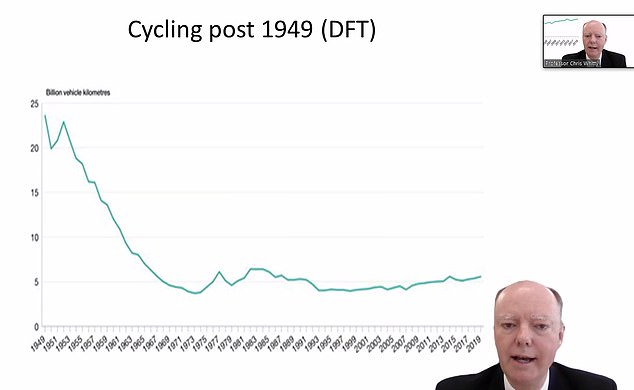 Department for Transport data highlighted by Sir Chris shows people in England collectively clocked up around 24billion km of cycling in 1949. But rates have dropped significantly since then, with Britons cycling just 5billlion km in 2019 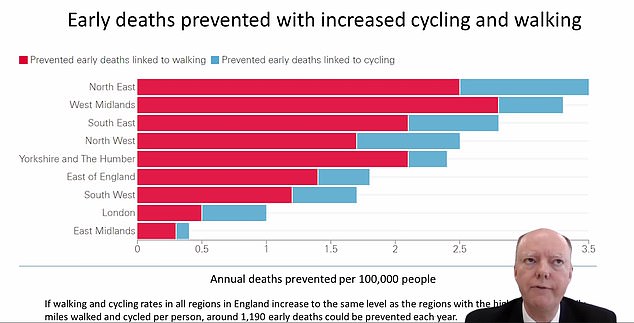 Sir Chris pointed to data from the Health Foundation, which showed that increasing the amount of walking or cycling across England could lead to a significant reduction in premature deaths

Department for Transport data highlighted by Sir Chris showed people in England collectively clocked up around 24billion km of cycling in 1949.

But rates have dropped significantly since then, with Britons cycling just 5billlion km in 2019.

There is a ‘high chance’ that a new Covid variant which is worse than Omicron will emerge in the next two years, Sir Chris Whitty warned today.

In a downbeat assessment of how the next phase of the pandemic could pan out, England’s chief medical officer hinted that lockdowns may still be on the cards.

Sir Chris told the Local Government’s Association public health conference that there was still a ‘long way to go’ because the virus will continue to ‘throw surprises’. He also insisted the virus — which now poses a similar death threat as flu — will be with us ‘for the rest of our lives’.

The emergence of a more dangerous strain could ‘significantly change our balance of risk’, Sir Chris added in his speech, which came on the second anniversary of the historic coronavirus lockdown.

Sir Chris said the strain could cause ‘worse problems’ than Omicron and the challenges from the current strain are ‘not by any means trivial’.

But other experts have repeatedly insisted the darkest days of the pandemic have been consigned to history, insisting that the virus is mutating into a cold-causing pathogen over time.

Omicron burst onto the scene in November, with infection rates hitting pandemic highs and experts estimating one in 15 people in England were infected at the winter peak.

Sir Chris said despite efforts to promote walking and cycling during the pandemic, rates of obesity soared across the country.

Many areas of public health have either ‘trodden water or gone backwards over the last two year and we do need to quite seriously address them’.

And obesity in the UK has got ‘substantially worse over time’, especially among children, he warned.

Boris Johnson announced a crackdown on obesity in 2020 after a near-fatal bout of Covid which he attributed to being overweight.

As part of the plan, new laws restricting offers on foods high in fat, sugar and salt are due to come into effect in medium and large shops in October.

Junk food giants will also be banned from advertising online and before 9pm on TV by January 2023.

Sir Chris said: ‘One of the things that is the most effective ways of improving health – whether it’s cardiovascular, cancer or mental health – is physical exercise.

‘And active transport is a particularly important way to do this because it builds it into people’s normal routines of daily life, rather than being seen as something that is separate.’

He said cycling statistics from the 50s demonstrates that ‘the idea that the UK is a country you can’t actually do cycling is clearly incorrect’.

And Sir Chris pointed to data from the Health Foundation, which showed that increasing the amount of walking or cycling across England could lead to a significant reduction in premature deaths.

He added: ‘What happened during the Covid crisis is that we saw many local authorities being extremely imaginative in the way that they made it easier for people to walk and cycle to work, to shops as well as recreationally – largely as a way of trying to get people off public transport where they could pass on or acquire Covid.

‘But what this demonstrates is what can be done and there’s a lot that could be done in every area of the country.’

Sir Chris also acknowledged that other public health problems, such as air pollution, improved during lockdowns.

The chief medical officer will address air pollution in his annual report later this year, but refused to draw links between the car and tobacco industries.

He said: ‘People need to get around, and the car industry is an important part of that, whereas no-one needs to smoke and the cigarette industry essentially makes profits by killing its fellow citizens.