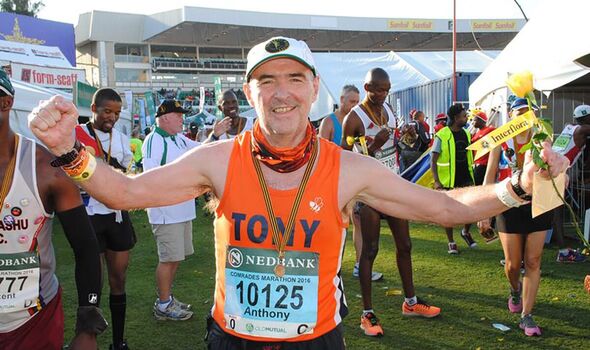 An ultramarathon runner who visited the doctor with “groin strain” was shocked when he was given just two years to live.

Fitness enthusiast Tony Collier was diagnosed with stage 4 prostate cancer while he was training for the Comrades Marathon in South Africa.

The 65-year-old has run numerous marathons over the years, including many during his 50s.

Despite the challenges he faced, the runner, from Altrincham, Greater Manchester, embarked on a gruelling charity fundraiser by running 5k a day for a year.

Beginning last year, Tony, who works as an accountant, has almost completed it, with his final run taking place on January 3, reports Cheshire Live.

He has already managed to rack up over 1,300 miles and raise over £13k for the MOVE Charity, which supports and inspires people to Move Against Cancer.

This is despite his challenging diagnosis and the side effects of his ongoing treatment, including fatigue.

This also involved navigating some of the seasonal challenges of running in the UK, ranging from battling against summer heatwaves of around 35c to ice, snow and freezing temperatures as low as -10c that the country has experienced this winter.

Tony’s cancer diagnosis and his worst-case prognosis of having just two years to live were given back in 2017, and he credits his love of running and exercise with boosting his physical and mental health and helping him outlive that prognosis.

Tony, who has been married to Tracey for 42 years, with two children and four grandchildren, is calling on people around the world to join him on his final day of the challenge on January 3, sharing their efforts using the hashtag #MoveWithTony.

Tony, who is the North West Regional Champion for 5k Your Way, said: “The challenge hasn’t been easy but we know exercise is so, so important for people with cancer.

“Some days I’ve really not felt like running but I’ve managed to get out there and get it done.

“The recent cold weather has been particularly tricky, but I’ve still managed to complete my runs in shorts!

“I’ve been blown away by the response to the challenge and want to thank everyone who has donated so far.

“I hope as many people as possible will join me to move their way on 3rd January and post online with the hashtag #MoveWithTony.”

Tony will be accompanied on his final 5k by friends and family.

He is encouraging as many people from around the world to move their way, be it by running, walking the dog or something else and to post their efforts on social media using the hashtag #MoveWithTony.