London: The memory of older people has been returned to the state of someone in their 20s for the first time by applying electrical stimulation to the brain to reconnect faulty circuits. Scientists at Boston University have proven it is possible to restore working memory by "recoupling" areas of the brain that become out-of-sync as people grow older.

Short-term working memory is crucial for everyday life, storing information for around 10-15 seconds to allow problem solving, reasoning, planning and decision-making; for example, keeping the digits of a telephone number in mind while writing it down. 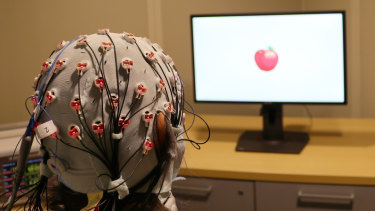 A cap that administers electrical stimulation and monitors brain waves for a visual working memory test at Boston University.Credit:AP

Sometimes described as being "mentally online", working memory forms the basis of consciousness, but declines with age and is the reason elderly people can struggle with basic tasks.

Now scientists believe they have uncovered what causes the decline and how to reverse it.

Two areas in the brain, the prefrontal and temporal cortex, must be talking to each other correctly for working memory to function well.

When scientists fired electrical currents of the same frequency at the areas, older people were found to be able to carry out working memory tasks as well as people in their 20s.

Lead author Dr Robert Reinhart, of Boston University, said: "We're re-synchronising these brain areas that are uncoupled or less synchronised in the elderly; we're re-synchronising them and seeing behavioural benefits. These findings … not only give us new insights into the basis for working memory decline but show that negative age-related changes are not unchangeable, we can bring back the superior working memory function that you had when you were much younger."

The stimulation took 25 minutes, after which time the older people were able to complete working memory tests roughly as well as the youngerparticipants. The effect lasted at least 50 minutes, when scientists stopped the tests, but researchers think it could last for several hours.

They hope that electrodes will eventually be implanted into hats or headsets which could be administered by doctors or even at home, to give a helpful memory boost when needed.

It could also help people suffering memory loss due to Alzheimer's or Parkinson's, the study's authors believe.

Dr Reinhart added: "Working memory deficits are central to many brain disorders, from schizophrenia to Alzheimer's, Parkinson's, ADHD and autism so our hope is this will lay the basic groundwork for an entirely new avenue of research."

The findings were published in the journal Nature Neuroscience.