This is a Kaiser Health News story.

Jennifer Millar keeps trash bags and hand sanitizer near her tent, and she regularly pours water mixed with hydrogen peroxide on the sidewalk nearby. Keeping herself and the patch of concrete she calls home clean is a top priority.

But this homeless encampment off a Hollywood freeway ramp is often littered with needles and trash, and soaked in urine. Rats occasionally scamper through, and Millar fears the consequences.

“I worry about all those diseases,” said Millar, 43, who said she has been homeless most of her life.

Infectious diseases — some that ravaged populations in the Middle Ages — are resurging in California and around the country, and are hitting homeless populations especially hard.

Los Angeles recently experienced an outbreak of typhus — a disease spread by infected fleas on rats and other animals — in downtown streets. Officials briefly closed part of City Hall after reporting that rodents had invaded the building.

People in Washington state have been infected with Shigella bacteria, which is spread through feces and causes the diarrheal disease shigellosis, as well as Bartonella quintana, which spreads through body lice and causes trench fever.

Hepatitis A, also spread primarily through feces, infected more than 1,000 people in Southern California in the past two years. The disease also has erupted in New Mexico, Ohio and Kentucky, primarily among people who are homeless or use drugs.

Public health officials and politicians are using terms like “disaster” and “public health crisis” to describe the outbreaks, and they warn that these diseases can easily jump beyond the homeless population.

“Our homeless crisis is increasingly becoming a public health crisis,” California Gov. Gavin Newsom said in his State of the State speech in February, citing outbreaks of hepatitis A in San Diego County, syphilis in Sonoma County and typhus in Los Angeles County.

The diseases have flared as the nation’s homeless population has grown in the past two years: About 553,000 people were homeless at the end of 2018, and nearly one-quarter of homeless people live in California.

The diseases spread quickly and widely among people living outside or in shelters, fueled by sidewalks contaminated with human feces, crowded living conditions, weakened immune systems and limited access to health care.

“The hygiene situation is just horrendous” for people living on the streets, said Dr. Glenn Lopez, a physician with St. John’s Well Child & Family Center, who treats homeless patients in Los Angeles County. “It becomes just like a Third World environment where their human feces contaminate the areas where they are eating and sleeping.”

Those infectious diseases are not limited to homeless populations, Lopez warned. “Even someone who believes they are protected from these infections are not.” 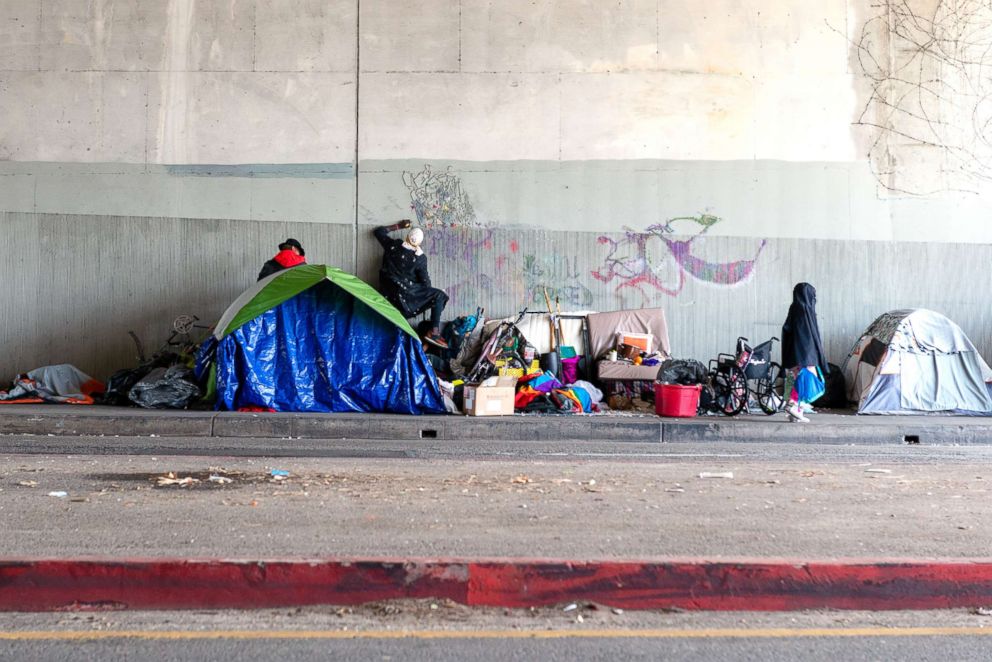 At least one Los Angeles city staffer said she contracted typhus in City Hall last fall. And San Diego County officials warned in 2017 that diners at a well-known restaurant were at risk of hepatitis A.

Typhus is a bacterial infection that can cause a high fever, stomach pain and chills but can be treated with antibiotics. Outbreaks are more common in overcrowded and trash-filled areas that attract rats.

The recent typhus outbreak began last fall, when health officials reported clusters of the flea-borne disease in downtown Los Angeles and Compton. They also have occurred in Pasadena, where the problems are likely due to people feeding stray cats carrying fleas.

Last month, the county announced another outbreak in downtown Los Angeles that infected nine people, six of whom were homeless. After city workers said they saw rodent droppings in City Hall, Los Angeles City Council President Herb Wesson briefly shut down his office to rip up the rugs, and he also called for an investigation and more cleaning.

Hepatitis A is caused by a virus usually transmitted when people come in contact with feces of infected people. Most people recover on their own, but the disease can be very serious for those with underlying liver conditions. There were 948 cases of hepatitis A in 2017 and 178 in 2018 and 2019, the state public health department said. Twenty-one people have died as a result of the 2017-18 outbreak.

The infections around the country are not a surprise, given the lack of attention to housing and health care for the homeless and the dearth of bathrooms and places to wash hands, said Dr. Jeffrey Duchin, the health officer for Seattle and King County, Wash.

In his area, Duchin said, he has seen shigellosis, trench fever and skin infections among homeless populations.

In New York City, where more of the homeless population lives in shelters rather than on the streets, there have not been the same outbreaks of hepatitis A and typhus, said Dr. Kelly Doran, an emergency medicine physician and assistant professor at NYU School of Medicine. But Doran said different infections occur in shelters, including tuberculosis, a disease that spreads through the air and typically infects the lungs.

The diseases sometimes get the “medieval” moniker because people in that era lived in squalid conditions without clean water or sewage treatment, said Dr. Jeffrey Klausner, a professor of medicine and public health at UCLA.

People living on the streets or in homeless shelters are vulnerable to such outbreaks because their weakened immune systems are worsened by stress, malnutrition and sleep deprivation. Many also have mental illness and substance abuse disorders, which can make it harder for them to stay healthy or get health care. 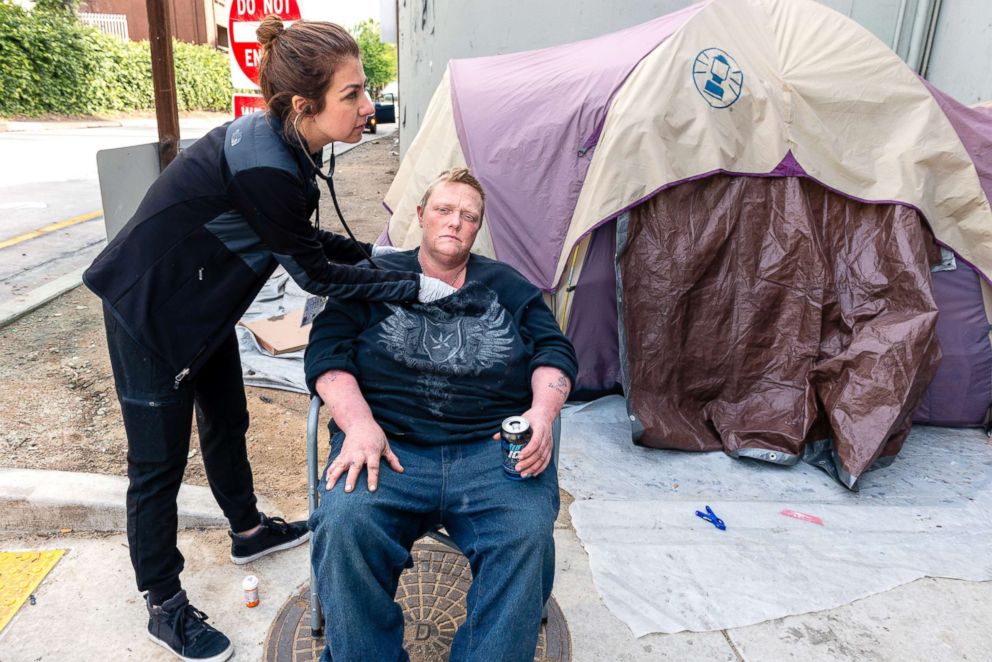 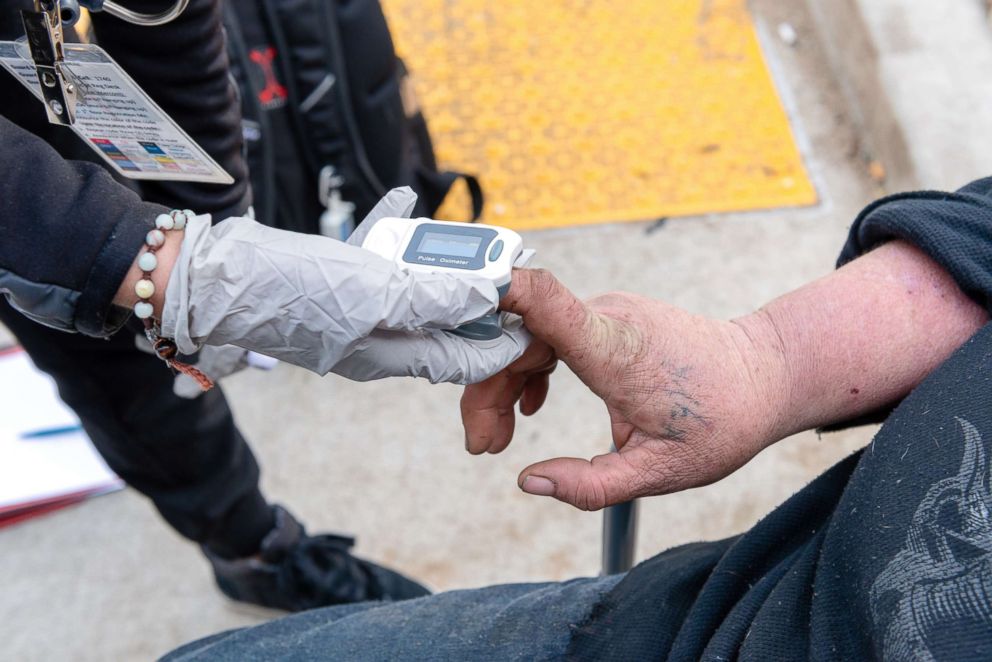 One recent February afternoon, Saban Community Clinic physician assistant Negeen Farmand walked through homeless encampments in Hollywood carrying a backpack with medical supplies. She stopped to talk to a man sweeping the sidewalks. He said he sees “everything and anything” in the gutters and hopes he doesn’t get sick.

She introduced herself to a few others and asked if they had any health issues that needed checking. When she saw Millar, Farmand checked her blood pressure, asked about her asthma and urged her to come see a doctor for treatment of her hepatitis C, a viral infection spread through contaminated blood that can lead to serious liver damage.

“To get these people to come into a clinic is a big thing,” she said. “A lot of them are distrustful of the health care system.”

On another day, 53-year-old Karen Mitchell waited to get treated for a persistent cough by St. John’s Well Child & Family Center’s mobile health clinic. She also needed a tuberculosis test, as required by the shelter where she was living in Bellflower, Calif.

Mitchell, who said she developed alcoholism after a career in pharmaceutical sales, said she has contracted pneumonia from germs from other shelter residents. “Everyone is always sick, no matter what precautions they take.”

During the hepatitis A outbreak, public health officials administered widespread vaccinations, cleaned the streets with bleach and water and installed hand-washing stations and portable toilets near high concentrations of homeless people.

“It really is unconscionable,” said Bobby Watts, CEO of the National Health Care for the Homeless Council, a policy and advocacy organization. “These are all preventable diseases.”

Kaiser Health News is a nonprofit news service covering health issues. It is an editorially independent program of the Kaiser Family Foundation, which is not affiliated with Kaiser Permanente.