Killer Zika-carrying mosquitoes are ‘heading to the UK’

Killer Zika-carrying mosquitoes are heading to the UK as global warming sees Britain get hotter and wetter, study predicts

Mosquitoes carrying serious illnesses like Zika and dengue fever could migrate to the UK in the next few decades because of global warming, scientists predict.

The Aedes aegypti mosquito – currently mostly in Africa and Asia – could be lured west by warmer, more humid weather as the global temperature rises.

And as many as a billion more people, including residents of Canada, the UK and Europe could be exposed to the infectious bugs.

Researchers say this could become normal by 2080 if the current rate of climate change continues.

The scientists added the viruses are likely to cause particularly nasty outbreaks in countries which have never experienced them before – such as the UK – because people haven’t built up any immunity to them.

They even went as far as to warn the spread of the insects poses one of the ‘biggest threats to global security’ if nothing is done about global warming. 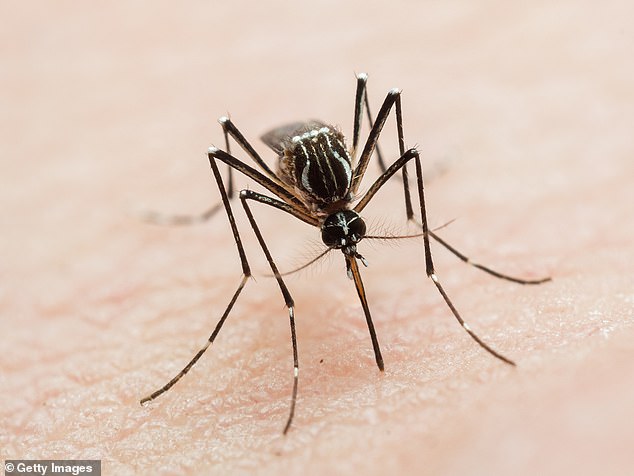 Experts predict Aedes aegypti mosquitoes (pictured), which bite humans and spread illnesses like dengue fever and Zika, could migrate to the UK and US in the next few decades because of global warming

Researchers from the US said there must be quick action to slow down climate change if the spread of deadly disease in this way is to be stopped.

If the viruses take hold it won’t be just a matter of ill health, the experts said – countries with mosquito-carried illness suffer financially as well.

Study author Sadie Ryan, from the University of Florida, said the viruses can cause ‘a loss of productivity at work, things like that. Essentially, they will lead to economic decline in areas where they take off’.

The study predicted the movement of two of the most common disease-carrying mosquitoes – the Aedes aegypti and Aedes albopictus.

Scientists did this by looking at predicted future temperatures up to 2080, and comparing it with the bugs’ current habitats.

As average temperatures around the earth rise, making them more suitable for mosquitoes, humidity will also increase because more water will evaporate from the ground and oceans and warmer air can hold more moisture, leading to more rain.

The moquitoes can carry viruses including dengue, chikungunya and Zika, which can in some cases be fatal or cause other debilitating illnesses.

Those include hemorrhagic fever with repeated dengue exposure and congenital microcephaly in some cases of Zika exposure, said Dr Ryan.

Vaccinations do not yet exist for Zika or chikungunya, and only a few are in trial stages for dengue, said Georgetown University’s Colin Carlson, another lead author of the analysis.

‘The first line of defense for these diseases has never been vaccination,’ said Dr Carlson. 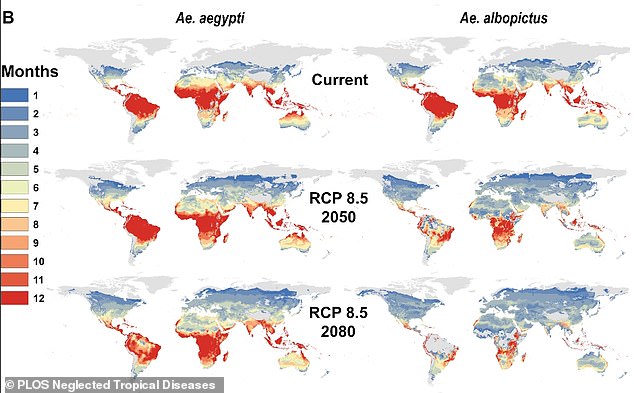 ‘On the whole, it’s a lot easier for us to prevent mosquitoes or viruses from showing up somewhere than to prevent an outbreak once it has already started.’

WHAT IS ZIKA VIRUS AND HOW IS IT SPREAD?

The Zika virus is spread by mosquito bites, between people during unprotected sex, and from pregnant mothers to their children.

It cannot be cured or prevented with medicines. Although most adults do not become seriously ill from the infection, it can cause serious birth defects if pregnant women get it.

Foetuses’ brains can be affected by the virus when it is passed on from the mother and it can cause microcephaly.

Microcephaly is a condition in which babies’ heads are unusually small, which can lead to seizures, delayed development and other disabilities.

The virus can also increase the risk of unborn children developing Guillain-Barre syndrome – an uncommon illness in which the immune system attacks the nerves and can cause muscle weakness and paralysis.

Zika is a tropical disease and is most common in Central and South America, Africa and South East Asia.

There was an outbreak of the virus in Brazil’s capital, Rio de Janeiro, in 2016 and there were fears that year’s Olympic Games would have to be cancelled after more than 200 academics wrote to the World Health Organization warning about it.

The virus is not commonly found in developed countries like the UK, US and Australia. But it is present in the Pacific Islands such as Fiji and Tonga, where the pregnant Duchess of Sussex will visit on her royal tour this month.

Those at risk can help lower the threat by measures such as using insect spray, putting screens on windows and removing excess rubbish and water from around the home, Dr Carlson said.

But he said the only real way to stop the spread of the mosquitoes is to do more to slow climate change and improve surveillance of the insects.

‘If the climate doesnt change, that limits a good amount of where these mosquitoes can go,’ Dr Carlson said.

Combining data on temperatures and changing populations suggested to researchers where mosquitoes may flourish or decline – and how many people will be at risk in the future, the researchers said.

‘What this essentially gives us is the capacity to say where can we expect these things to show up, establish, invade and perhaps where outbreaks may occur,’ Dr Ryan said.

‘It kind of gives us a nice management tool to say, “Here´s where we are going to see those increases in potential risk, so let’s start doing some surveillance there, let’s think about managing things there”,’ she said.

Virtually all the scenarios predict an increase in risk in North America, Europe and East Asia, Dr Carlson said.

Even a couple of degrees of permanent warming would be enough for mosquitoes to be attracted to the area.

Dr Carlson added that in areas where a lot of people live, mainly cities with a high population density, many people may face the viruses for the first time in their lives – which is a particular worry.

‘Populations that have never faced these diseases before haven´t built up immunity,’ he said. ‘So we’re very worried that they are going to have much larger outbreaks when these pathogens show up for the first time.’

In the worst-case emissions scenario, where the earth warms by 8.5C by the turn of the century, many more people will likely deal with mosquito-carried viruses, Dr Ryan said.

And she added that, without immediate action to reduce carbon emissions and curb climate change, the mosquitoes will be ‘one of our biggest threats to global security’.

The research was published in the journal PLOS Neglected Tropical Diseases.

CLIMATE CHANGE DEATHS ‘ARE BEING UNDERESTIMATED’

The World Health Organization is underestimating how many people will die because of climate change, experts claim.

Researchers from the London School of Hygiene and Tropical Medicine and the University of Washington picked apart the WHO’s warning that global warming will lead to the deaths of an extra quarter-of-a-million people per year between 2030 and 2050.

This translates to approximately one in every 200 deaths – around 55million people die each year – but the true toll is now expected to be significantly higher, although the study authors couldn’t put a number on it.

As well as heat stress and malaria, people will also die because of extreme weather events, migration and reduced farm productivity, they said.

And rising temperatures and intense weather around the world will endanger the lives of ‘many millions of people’.

‘There is also population displacement and a range of additional factors like food production and crop yield, and the increase in heat that will limit labor productivity from farmers in tropical regions that wasn’t taken into account among other factors.’

They said food shortages alone could lead to more than half a million (529,000) adults dying every year by 2050.

And the World Bank estimates 100million more people will be thrust into ‘extreme poverty’ – which the UN defines as deprivation of food, water, sanitation and healthcare – in the next 11 years, putting their lives at risk.