Lyme disease can be diagnosed by ‘bull’s eye’ rash alone: New NHS advice tells doctors not to wait for other symptoms to avoid major complications

Doctors have been told to diagnose patients with Lyme disease immediately if they have the tell-tale ‘bull’s-eye’ rash.

Rather than waiting for the results of blood tests, new guidance issued by the National Institute for Health and Care Excellence (NICE) urges medics to just look for the rash, which is present in around two-thirds of cases.

Lab tests do not always pick up on the infection, which can slow the start of treatment.

Lyme disease can usually be revolved with a three-week course of antibiotics.

But if left untreated, the infection can lead to inflammatory arthritis, meningitis and even heart failure. 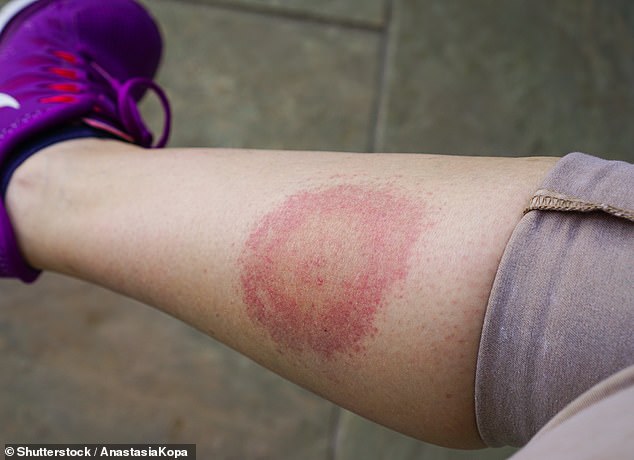 Doctors should diagnose patients with Lyme disease immediately if they have the tell-tale ‘bull’s-eye’ rash, according to the National Institute for Health and Care Excellence (stock)

‘For most people with Lyme disease, a course of antibiotics will be effective, so it is important we diagnose and treat people as soon as possible,’ Professor Gillian Leng, director of health and social care at NICE, said.

‘A person with Lyme disease may present with a wide range of symptoms, so we have clear advice for professionals about the use of lab tests for diagnosis and the most appropriate antibiotic treatments.

Lyme disease is a bacterial infection that spreads to humans via infected ticks found in woodlands throughout Europe and North America.

Most people develop a distinctive circular rash – known as a erythema migrans – within 30 days of being bitten.

This rash resembles a bull’s-eye due to the affected area being red and the edges slightly raised.

More serious symptoms can develop within weeks, months or even years if Lyme disease is untreated or not seen to early enough.

WHAT CELEBRITIES HAVE BATTLED LYME DISEASE?

Country legend Shania Twain had to retrain her voice after she developed dysphonia – affects the muscles of the larynx – as a result of the Lyme disease she contracted during her 2003 Up! tour.

In response to rumours she was in rehab, Sk8er Boi singer Avril Lavigne revealed she actually spent five months bedridden as a result of Lyme disease in 2015.

Avril even said she ‘accepted death’ when she could ‘feel her body shutting down’. Now recovered, she reflects on the period as a ‘battle of a lifetime’.

Real Housewives of Beverly Hills star Yolanda Hadid has been battling Lyme disease remissions for years after finally being diagnosed in 2012. Doctors previously thought it was ME.

And her daughter Bella Hadid, who models for Victoria’s Secret, also suffers from the ‘invisible illness’ and has said she does not know what it is like to wake up without bone pain or brain fog.

Hollywood actor Ben Stiller was diagnosed in 2010. Although symptom free, he has said it ‘never leaves your system’.

Lyme disease is difficult to diagnose due to its early symptoms being similar to other conditions.

These symptoms can include:

Blood tests can confirm the diagnosis, however, these are often negative in the early stages of the infection.

This is because they look for antibodies – immune-fighting proteins released in response to an infection – in the blood.

However, it may take six to eight weeks for Lyme disease antibodies to appear after a person has been bitten.

In the UK, patients have previously required two blood tests before an official diagnosis is made.

The new draft guidance – under consultation until March 12 – will hopefully increase the number of early diagnoses.

This will allow patients to receive treatment immediately, reducing their risk of complications.

When there is no rash present and symptoms are unclear, doctors will be advised to carry out blood tests as normal.

Professor Saul Faust, chairman of the guideline committee, said: ‘Lab tests are necessary when a person’s symptoms are unclear, but they are not needed if a person presents the characteristic red rash, erythema migrans.

‘Doctors should feel confident to prescribe antibiotics immediately for those with erythema migrans.’

‘When a patient has the rash, this delay is unnecessary and reduces the likelihood of total cure.’