The man with an ‘unrelenting’ 22-hour erection caused by an illegal TANNING INJECTION: 41-year-old needed hospital treatment after his own efforts to combat his priapism failed

A 41-year-old man needed hospital treatment for an erection that had lasted 22 hours after he injected a tanning supplement.

The man, who lives in Scotland, bought melanotan, which is illegal to sell in the UK, at a bodybuilding shop. He injected it into his abdomen.

The synthetic hormone, also known as the ‘Barbie drug’, triggered the unidentified man’s case of priapism, the medical term for a prolonged erection, which usually lasts four to six hours.

The patient had to endure a barrage of injections into his sore penis to relieve the erection, narrowly avoiding surgery.

But four weeks later, the man was suffering with erectile dysfunction – a permanent side effect in severe cases of priapism.

Doctors said they had never seen a case like it, and said it served as a warning about dodgy tanning products on the market. 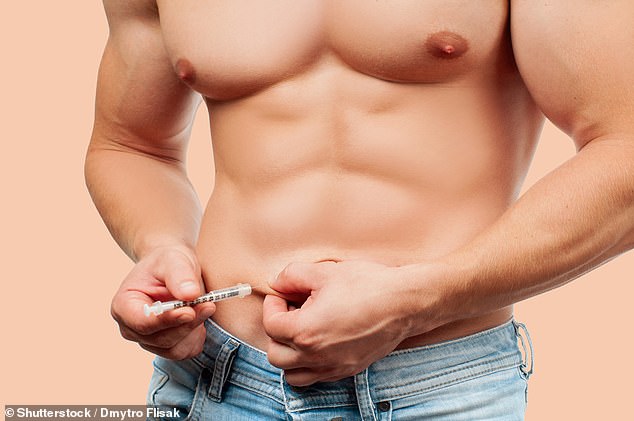 Melanotan is a synthetic hormone used for tanning that works by increasing the levels of melanin, a natural dark pigment in the skin.

The doctors revealed the man had been purchasing the melanotan solution over the counter for several months and he usually had a very good tan response.

Products such as melanotan, steroids and image enhancing drugs such as clenbuterol to lose weight, are common among the bodybuilding scene and increasingly in the general population, too.

But melanotan is not legal in the UK because no-one is sure of its dangers.

Melanotan is a synthetic hormone used for tanning that works by increasing the levels of melanin, a natural dark pigment in the skin.

This pigment is part of the body’s natural response to the sun, and increasing levels of melanin results in skin darkening or tanning.

It is currently illegal to sell tan injections such as Melanotan, as this product is unlicensed.

Melanotan is illegal in the UK because it has not been tested for safety, quality or effectiveness and no one knows what the possible side effects are or how serious they could be.

The MHRA (Medicines and Healthcare products Regulatory Agency) tests medical products in the UK. They are warning people not to use Melanotan and they say that the product is being ‘advertised and sold illegally’.

The drug is sold online or under the counter at gyms and beauty salons and because the drug is self-injected, there are fears that users are putting themselves at risk of infections such as hepatitis or HIV.

The man said that the label or seller didn’t give any indications of major side effects, and dosage was in ‘number of phials’, so it was unclear how much medication was in each injection.

He had suffered with two-hour erections after using it previously. But this time, after injecting a phial into his stomach, his penis was painful and ‘unable to be used’ within an hour.

He arrived at A&E after 22 hours, after attempting to soothe the pain with ice at his home.

Tests confirmed that the man had low-flow priapism, which is the result of blood being trapped in the erection chambers.

It can occur without a known reason in men who are otherwise healthy, but it also affects men with sickle-cell disease.

After injections every five minutes by doctors for around half an hour, the man finally saw his erection subside.

The International Society of Sexual Medicine recommends that penile shunting procedures be considered when first line treatment has not worked or as a first option for priapism episodes lasting more than 72 hours.

The doctors said the man avoided a surgical shunt, which is a passageway that is surgically inserted into the penis to divert the blood flow and allow circulation to return to normal.

The report said: ‘Although this patient claimed he did not take any other drugs, concomitant substance misuse was not definitively ruled out as he self-discharged before a toxicology screen could be performed.

‘It may be possible that he also misused other drugs from the body-building store and these may have contributed to his erectile dysfunction.’

The patient had approximately two weeks of swelling after returning home and initially no erections whatsoever.

‘In the last week, however, he had started to have some spontaneous erections though they were shortlived and unable to be sustained for use,’ the report said.

Dr Dreyer added: ‘Priapism is an uncommon presentation to the accident and emergency department, and in my one year of urology in Glasgow this is the only case that I have seen.

‘We chose to write this case up as it presented a rare/unheard of cause of an uncommon disease.’

Forms of melanotan has been suggested as a possible therapeutic for the treatment of erectile dysfunction, but the doctor’s said cases such as this unfortunate man’s needed to be taken into account.

Dr Dreyer said: ‘Our patient said that if he had known about priapism as a potential side-effect he would never have considered using Melanotan.

‘More widespread knowledge around this side effect may help decrease Melanotan misuse.  He will avoid melanotan use in future and stick to sun-beds.’