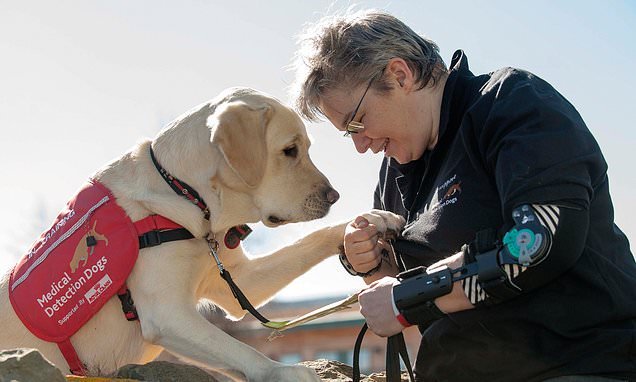 Medical-detection dogs can pick up on their diabetic owners’ ‘hypos’, research suggests.

The pooches respond to signs of hypoglycaemia – dangerously low blood sugar – on their owner’s breath or sweat by licking their face or fetching their blood-testing kit.

After testing 27 dogs in thousands of hypo or hyperglycaemia cases, the researchers found the animals get it right 83 per cent of the time.

Experts have praised the ‘fantastic’ findings for allowing type 1 diabetics to keep track of their blood sugar levels in a non-invasive, ‘effective’ way that helps them live independently. 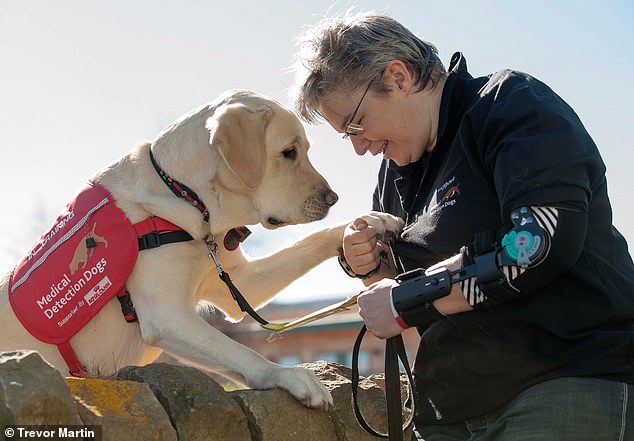 The research was carried out by the University of Bristol and led by Dr Nicola Rooney, from the department of animal welfare and behaviour.

More than four million people in the UK are living with diabetes, Diabetes UK statistics reveal. And the disease affected 30.3million Americans in 2015, according to the American Diabetes Association.

Type 1 diabetes occurs when beta-cells in the pancreas fail to produce insulin and affects just 10 per cent of diabetics.

Hypoglycaemia is a common side effect of insulin medication among type 1 diabetics but a quarter of patients are unaware of the risks, the researchers wrote in the journal PLOS One.

Left untreated, hypoglycaemia can lead to unconsciousness or even death.

Fear of hypoglycaemia is common, which can cause people to ‘run their blood sugars high’.

This can lead to diabetic ketoacidosis – when the body breaks down fat for energy, which can result in a diabetic coma; as well as severe dehydration.

Hypoglycaemia – or a hypo – occurs when a person’s blood sugar level drops too low.

It mainly affects diabetics, particularly if they take insulin.

If you have a device to check your blood sugar level, a reading of less than 4mmol/L is too low and should be treated.

Early symptoms can include:

If untreated, symptoms can develop into:

If hypos occur at night, people can wake with headaches, fatigue or damp sheets from sweat.

If your blood-sugar reading is less than 4mmol/L or you have hypo symptoms, have a sugary snack or drink and re-test your blood sugar level after 15minutes.

If it has not improved, seek medical attention. A glucagon injection can also help.

Causes of hypos can include:

Glycaemia-alert dogs have been shown to improve the quality of life of patients with type 1 diabetes, however, research is sparse, contradictory and only investigated a small number of animals.

‘We already know from previous studies that patients’ quality of life is vastly improved by having a medical detection dog,’ Dr Rooney said.

‘However, to date, evidence has come from small scale studies.

The researchers analysed medical records to assess the reliability of 27 trained dogs after their owners provided six-to-12 weeks worth of blood results every time their pet became alerted.

The dogs were trained by Medical Detection Dogs – the only UK programme accredited by Assistance Dogs UK for training hypoglycaemia-alert dogs.

The animals were first exposed to their owner’s sweat or breath in the lab while the diabetics were in a hypoglycaemic state.

They were then trained to respond by licking their owner’s face or fetching their blood-testing kit.

To be credited, the dogs must demonstrate 75 per cent sensitivity with less than 15 per cent false alerts.

The animals in the study had been credited for an average of one-and-a-half years.

Results revealed the dogs varied in how reliable they were at picking up on hypoglycaemia episodes but were correct 83 per cent of the time.

Four of the dogs even had 100 per cent accuracy rates and only two were incorrect more than half of the time.

Once alerted by their pooches, the owners could take appropriate action by administering insulin or eating something that restored their blood sugar levels.

Dr Claire Guest, chief executive and co-founder of Medical Detection Dogs, said: ‘The findings are fantastic news for all those who are living with Type 1 diabetes and other conditions.

‘Our dogs also serve the wider medical community by offering proactive solutions that are natural, non-invasive and have been shown to provide countless psychological benefits.

‘As our natural companions, and with a highly refined sense of smell, why shouldn’t they be able to detect changes in our personal health?’

Dr Ronney called for more research, adding: ‘Since the usage of such dogs is growing, it’s important any dogs used for these purposes are professionally trained, matched and monitored by professional organisations like Medical Detection Dogs.’