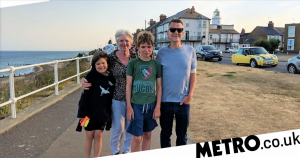 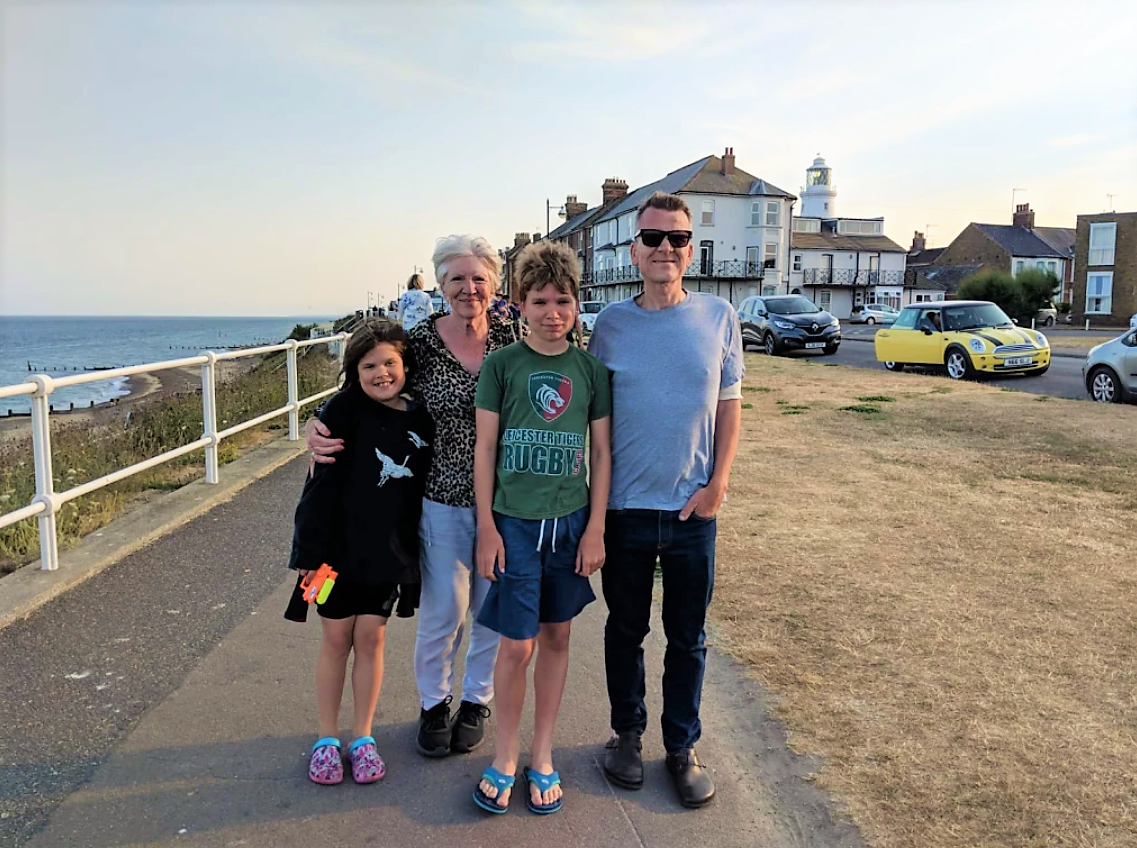 ‘I’ve not been feeling very well,’ Piers told me. ‘In fact, I’ve been back and forth to the GP since October.’

I looked at my eldest son in concern as he’d explained he’d been suffering from backache, indigestion and an upset stomach for two months now.

Before this, he hadn’t been to the doctors in years, decades even – he hadn’t needed to. He was fit and well; he went running regularly, boxed, and had a healthy diet.

It was Christmas 2017 and we’d met up for lunch for a catch-up. I’d noticed he’d lost weight and looked a bit run down, but I’d just put that down to his busy lifestyle.

He was married to the lovely Katherine and they had two gorgeous children, Farley and Alice. He had been in a new role at The Natural History Museum. It was his dream job and he was over the moon, but it meant staying in London during the week, then travelling to his home in Suffolk at the weekend.

‘The doctor says it’s stress but I’m just not feeling myself,’ he said.

Now, five years on, I look back at that conversation and I wish and pray and beg that I could do it all over again; that I could tell him to go and see another doctor immediately, to get a second opinion right then and there.

Because over the next few months, Piers got worse and worse. He lost four stone and started waking up in the middle of the night in pain.

I think, in my heart of hearts, I knew it was serious but I was still devastated when, after finally being referred for a CAT scan, he was diagnosed with Stage 4 pancreatic cancer in April 2018.

But Piers looked at me seriously. ‘You have to know that I won’t be cured, the doctors were sure,’ he said firmly. ‘All I want is to stay alive for as long as possible for Katherine and the children.’

Doctors had told him the tumours were too large and too close to a vein to operate.

His words devastated me, but I was so proud of his bravery. That didn’t stop us trying though. My daughter Clare’s husband worked in cancer research in America and he sent Piers’ scans to colleagues across the world, to see if there was any treatment anyone could suggest.

But there was nothing. It was too advanced.

Meanwhile, the doctors did further tests and biopsies and tried to build Piers up again with high calorie food so he’d be ready for the strongest dose of chemotherapy they could give him, in an attempt to shrink the tumours to prolong his life.

He started it in July 2018 and it was vicious. Still, after three or four days in bed, he’d be back up and working as much as he could. He wanted life to carry on as normally as possible for as long as he could.

After six months of chemo, he had six weeks of radiotherapy. But it was all to no avail. When he went back for more scans, rather than shrinking the tumours, they had grown.

It was the first time I had seen him truly disappointed – the treatment was so harsh, he’d really thought it would work – and it broke my heart.

If you have any of these symptoms and you don’t know why you have them, contact your GP or call NHS 111.

If you have jaundice go to your GP or A&E straight away.

We heard of a trial starting at the Royal Marsden Hospital but again, the tumours were too advanced. ‘If he’d been diagnosed earlier, there would have been a chance,’ the consultant told us.

Those words fueled the anger in me. He should have had that chance. But instead, Piers’ GP had believed he was too young for his symptoms to be the tell-tale signs of cancer, which is why it had taken so long for him to be referred.

The odds were, he was right. More than 45 out of every 100 people diagnosed with pancreatic cancer are over 75. It is far more common in older people. But there are always people who defy the odds, and on this occasion, that person was Piers. In the worst way.

Over the next few months, Piers was in and out of hospital. He couldn’t stop vomiting. Everything he ate, he brought back up. Doctors put him on protein drinks but the only thing he could keep down was jelly and ice cream.

We heard of a hospital in Germany who might be able to help him – but again, they said it was too late.

Eventually, in December 2019, it was agreed that he should go into a hospice in Bury St Edmunds when it was obvious Katherine needed help. It was exhausting for her to keep up with the two children and an extremely sick husband, as well as her job.

And as soon as he moved in there, it was the answer to all of our prayers. The staff there were nothing short of angels and knew exactly how to make the whole experience as bearable as possible.

‘He’s a real gentleman, isn’t he?’ the nurses would smile. ‘He never complains.’

And he didn’t. He handled his illness with dignity, I couldn’t have been prouder of him.

On 18 December, Piers asked if Alex (his brother) and I would help him wrap his presents to give to the children and Katherine when they came in.

It was as if he knew, because, in the early hours of the next morning, Piers woke up. ‘Help me, Mum, help me,’ he cried out. But, of course, I couldn’t, and a few hours later, he passed away.

The grief was shattering. No mum should ever lose her son. The whole thing seemed so surreal, but every now and then, the finality of it would hit me – that I’d never pick up the phone and hear his voice again, or be able to go to him for advice – leaving me breathless with pain.

The only thing I could do was to try and find some of the bravery Piers had shown and get through the days, one at a time. Katherine and I spoke and saw each other often and even now, three years on, we speak about our really low days, which we describe as being ‘at the bottom of the well’.

As a family, we have fundraised for Pancreatic Cancer Research UK and the hospice that looked after Piers so compassionately.

I pass on the symptoms of the cruel disease as often as I can – when a man came round to look at my kitchen and mentioned he had a sore back, I made him a cup of tea and told him about Piers. He promised he’d go straight to his doctor.

Pancreatic Cancer UK run the only dedicated pancreatic cancer support line in the UK, staffed by specialist nurses, because being diagnosed with this disease can be traumatic and they want to here – for patients and their loved ones.

It’s confidential and free to call. Details can be found on Pancreatic Cancer UK’s website. The number is 0808 801 0707, or people can contact a nurse via email.

As told to Sarah Whiteley