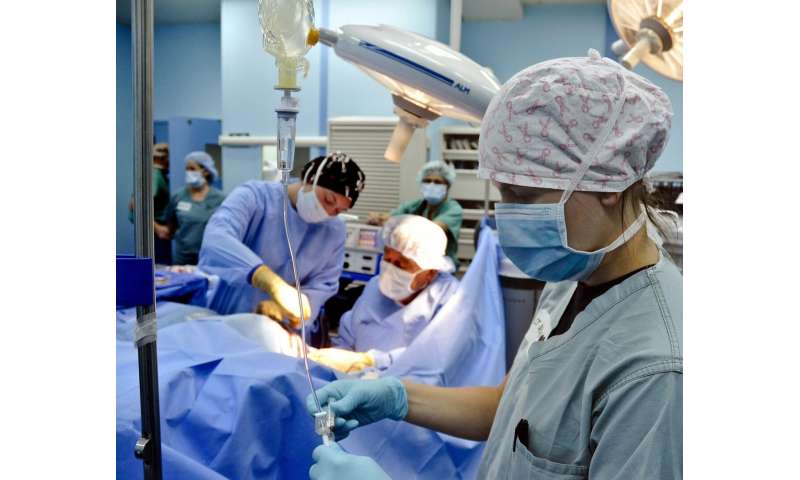 Removing part of the uterus using a keyhole surgery technique is a more effective way of treating heavy menstrual bleeding than the current most common operation, according to new research led by the University of Aberdeen.

The research, funded by the National Institute for Health Research is published in The Lancet today.

In the mid-1990s, Aberdeen researchers were among the first to show that endometrial ablation (destroying the lining of the womb) was an effective and less invasive alternative to traditional hysterectomy, which involves full removal of the uterus and the cervix.

Since then, hysterectomy has been considered a last resort for combating heavy menstrual bleeding, which affects 25% of women in the UK.

However, in recent years, a number of trials comparing traditional hysterectomy and endometrial ablation showed that full removal of the uterus provided greater relief from symptoms but led to more complications.

Now, in a new study published today in The Lancet, Aberdeen researchers led by Professor Kevin Cooper, have shown that a modified hysterectomy technique where only the body of the uterus is removed (leaving the neck of the womb—the cervix—behind) using keyhole surgery, is as safe as endometrial ablation but much more effective.

Researchers carried out a randomized trial on 660 women with heavy menstrual bleeding, across the UK. Half had endometrial ablation while the other half had the new technique—laparoscopic supra-cervical hysterectomy (LASH). Fifteen months after their surgery, the women treated using LASH were more satisfied with their treatment, but complication rates were similar in both groups.

Jane Smith, 47, from Kincorth in Aberdeenshire, had the LASH procedure in January 2018 after suffering from heavy and painful periods for many years.

“I had tried medication and the Mirena coil, without success. I had an endometrial ablation two years ago but unfortunately that also failed.

“Professor Cooper mentioned the LASH procedure and explained what was involved and I agreed to be listed for the procedure.

“The operation went very well and I was home by 8pm the same day. For a week afterwards I was sore and uncomfortable but this was attributed to the gas used during the operation. I was able to return to work after four weeks. The operation has been a total success and I have had no problems since the procedure. I am very grateful to Professor Cooper for suggesting the procedure to me.”

Professor Kevin Cooper from the University of Aberdeen, who is also a consultant gynecologist with NHS Grampian, said: “This study shows that LASH offers a more effective option than endometrial ablation, without any increased risks. Most women having this procedure get home within 24 hours and there are no restrictive rules for recovery, unlike traditional hysterectomy. Laparoscopic supracervical hysterectomy offers women another effective surgical choice for this common medical condition.”