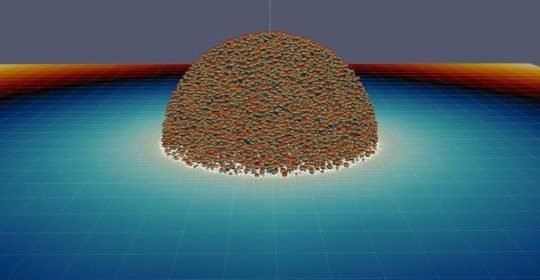 Army research is the first to develop computational models using a microbiology procedure that may be used to improve novel cancer treatments and treat combat wounds.

Using the technique, known as electroporation, an electrical field is applied to cells in order to increase the permeability of the cell membrane, allowing chemicals, drugs, or DNA to be introduced into the cell. For example, electro-chemotherapy is a cutting-edge cancer treatment that uses electroporation as a means to deliver chemotherapy into cancerous cells.

The research, funded by the U.S. Army and conducted by researchers at University of California, Santa Barbara and Université de Bordeaux, France, has developed a computational approach for parallel simulations that models the complex bioelectrical interaction at the tissue scale.

Previously, most research has been conducted on individual cells, and each cell behaves according to certain rules.

“When you consider a large number of them together, the aggregate exhibits novel coherent behaviors,” said Pouria Mistani, a researcher at UCSB. “It is this emergent phenomenon that is crucial for developing effective theories at the tissue-scale — novel behaviors that emerge from the coupling of many individual elements.”

This new research, published in the Journal of Computational Physics, is funded by the U.S. Combat Capabilities Development Command’s Army Research Lab, the Army’s corporate research laboratory known as ARL, through its Army Research Office.

“Mathematical research enables us to study the bioelectric effects of cells in order to develop new anti-cancer strategies,” said Dr. Joseph Myers, Army Research Office mathematical sciences division chief. “This new research will enable more accurate and capable virtual experiments of the evolution and treatment of cells, cancerous or healthy, in response to a variety of candidate drugs.”

Researchers said a crucial element in making this possible is the development of advanced computational algorithms.

“There is quite a lot of mathematics that goes into the design of algorithms that can consider tens of thousands well-resolved cells,” said Frederic Gibou, a faculty member in the Department of Mechanical Engineering and Computer Science at UCSB.

“It’s an exciting, but mainly unexplored area that stems from a deeper discussion at the frontier of developmental biology, namely how electricity influences morphogenesis,” — or the biological process that causes an organism to develop its shape — Gibou said. “In wound healing, the goal is to externally manipulate electric cues to guide cells to grow faster in the wounded region and accelerate the healing process.”

The common factor among these applications is their bioelectric physical nature. In recent years, it has been established that the bioelectric nature of living organisms plays a pivotal role in the development of their form and growth.

To understand bioelectric phenomena, Gibou’s group considered computer experiments on multicellular spheroids in 3-D. Spheroids are aggregates of a few tens of thousands of cells that are used in biology because of their structural and functional similarity with tumors.

“We started from the phenomenological cell-scale model that was developed in the research group of our colleague, Clair Poignard, at the Université de Bordeaux, France, with whom we have collaborated for several years,” Gibou said.

This model, which describes the evolution of transmembrane potential on an isolated cell, has been compared and validated with the response of a single cell in experiments.

“From there, we developed the first computational framework that is able to consider a cell aggregate of tens of thousands of cells and to simulate their interactions,” he said. “The end goal is to develop an effective tissue-scale theory for electroporation.”

One of the main reasons for the absence of an effective theory at the tissue scale is the lack of data, according to Gibou and Mistani. Specifically, the missing data in the case of electroporation is the time evolution of the transmembrane potential of each individual cell in a tissue environment. Experiments are not able to make those measurements, they said.

“Currently, experimental limitations prevent the development of an effective tissue-level electroporation theory,” Mistani said. “Our work has developed a computational approach that can simulate the response of individual cells in a spheroid to an electric field as well as their mutual interactions.”

Each cell behaves according to certain rules.

“But when you consider a large number of them together, the aggregate exhibits novel coherent behaviors,” Mistani said. “It is this emergent phenomenon that is crucial for developing effective theories at the tissue-scale — novel behaviors that emerge from the coupling of many individual elements.”

The effects of electroporation used in cancer treatment, for example, depend on many factors, such as the strength of the electric field, its pulse and frequency.

“This work could bring an effective theory that helps understand the tissue response to these parameters and thus optimize such treatments,” Mistani said. “Before our work, the largest existing simulations of cell aggregate electroporation only considered about one hundred cells in 3-D, or were limited to 2-D simulations. Those simulations either ignored the real 3-D nature of spheroids or considered too few cells for tissue-scale emergent behaviors to manifest.”

The researchers are currently mining this unique dataset to develop an effective tissue-scale theory of cell aggregate electroporation.