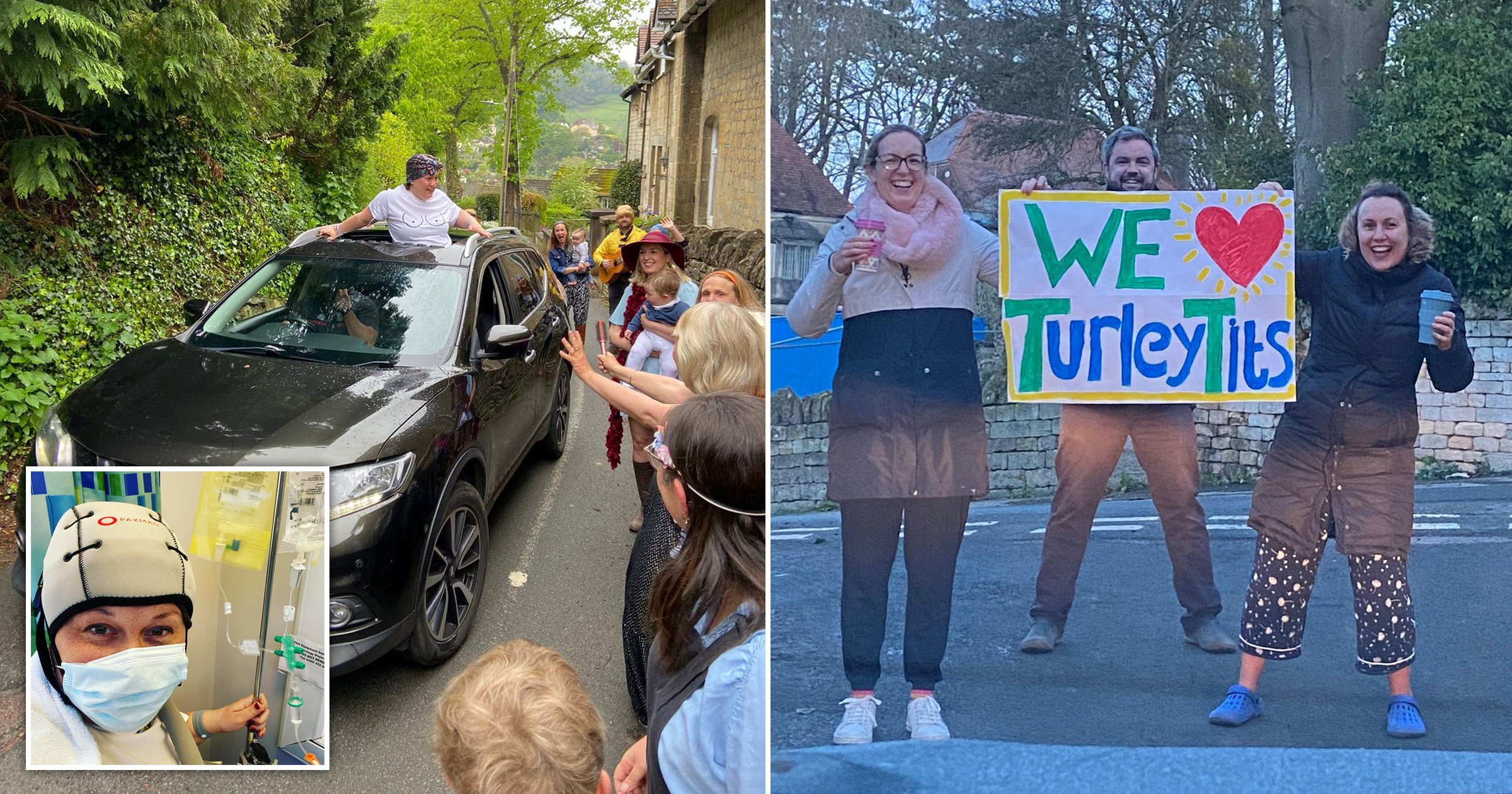 A cancer nurse was overwhelmed with kindness when her cheerleading friends lined the streets outside her home to wave her off to every chemotherapy session.

Bex Turley, 38, was diagnosed with breast cancer in January 2021 and was forced to go to chemotherapy treatments alone due to restrictions during the pandemic.

Her friends were determined to show their support and lined the streets with placards every week to sing and dance as they waved her off to her appointments.

They kept it up every week – even adding choregraphed dance routines – and ended with a huge Dolly Parton themed finale in tribute to Bex’s favourite song ‘Nine to Five’.

And after 17 weeks, the treatment appears to be working and mum-of-two Bex is on her way to being declared cancer-free.

Senior staff nurse Bex says: ‘Getting surprised by them every week just made everything that little bit easier. They were amazing!

‘Seeing the costumes and the dance routines that they’d spent hours rehearsing made me laugh so much during what was such a difficult time.

‘I couldn’t believe how many people got involved! People were travelling for hours just to come to do this for me and I couldn’t be more grateful.’

After finding a lump in her breast on 27 December last year, Bex went to her GP, and then had a mammogram.

Five biopsies and an ultrasound scan later, Bex, who cares for young people with cancer, was diagnosed with grade three invasive breast cancer.

‘I had just finished a night shift looking after kids with cancer and all of their lovely families and I was enjoying a luxurious bath at home,’ recalls Bex.

‘I just brushed past my boob and felt a lump by my armpit. I freaked out – I knew in my heart and bones, I just knew.

‘The biopsies were like being tarpooned with a staple gun taking chunks out. It was so painful and I was all on my own, thanks to Covid.

‘Obviously there are nurses at the sessions, so you’re not totally on your own but in normal times you can have people there to support you.

‘My friends and family felt helpless – they wanted to help me get through this and ordinarily they would have taken it in turns coming to sit with me at my sessions.’

Bex’s sisters Rachel and Sophie, and her brother-in-law Richard surprised the mum of two before her first chemotherapy session in January.

Standing outside Bex’s home in Rodborough, Stroud, they waved her off to hospital holding a huge homemade sign which read ‘We love Turley T*ts’ – which is the name of Instagram account Bex set up to document her cancer journey.

‘I was really scared and then we got in the car to go and suddenly there were my sisters and brother-in-law stood at the end of the street,’ says Bex.

‘It really took me by surprise and made me laugh. I’d been thinking about the chemotherapy for days and this helped take my mind off of it all for just a moment which I really needed.’

Bex had to search for the sisters dressed as ‘Where’s Wally?’ before she could head to week four of her chemo.

Week seven saw people twirling with umbrellas for a ‘Singing in the Rain’ performance, while week eight took Bex back to the eighties with a routine from Flashdance.

On week nine, her godmother Sue Humphries, appeared in full sequins and a silver lycra jumpsuit to perform ‘Dancing Queen’ as the group accompanied on keyboard and guitar.

More than 50 people waved Bex off to her final treatment session in May.

Blocking the street with decorations, the huge crowd was dressed in full country style costumes with cowboy hats flying away in the wind.

Her best friend, Laura Gale, burst from the crowd dressed as Dolly Parton herself having travelled all the way from Reading for the final send-off.

The chemotherapy sessions have now eradicated the cancer and with radiotherapy next on the cards, Bex has been overwhelmed by the kindness from her loved ones throughout her journey.

‘They all made going through this so much easier and I’m so grateful,’ says Bex.

‘Christmas to New Year when I first got my diagnosis, I felt so alone. I knew nobody with two kids who had cancer and I felt like I was going through it all on my own.

‘I would obviously dread the chemotherapy sessions but they made it so much better.

‘I’d arrive at the hospital and all the staff would be asking me what they’d done that morning. I would make myself late showing them all the videos!

‘To be laughing and smiling when I turned up for chemotherapy was just not what I expected at the start of this but it’s because of my friends and family that I was.’