One in EIGHT people are on ADHD drug adderall, estimates show

How pandemic policies fueled America’s Adderall addiction: One in EIGHT people are on ADHD drugs after prescription rules were relaxed to keep people at home during Covid

One in eight Americans are now hooked on Adderall after Covid pandemic policies during the Trump administration made the powerful stimulant available online with just a few clicks of a button.

The Federal Government relaxed rules around prescribing  medicines in March 2020, just as the virus started to take off in the US, allowing telemedicine companies to dish out the drug online without an in-person consultation.

The aim was to keep people out of hospitals and doctors’ clinics, while ensuring access to medicines. But it inadvertently created a booming market for start-ups who brazenly advertised their ’60-second assessments’ and aggressively marketed the medication on social media.

Today, some 41million Americans have a prescription for Adderall, estimates suggest, a 16 percent surge from before Covid struck. Four million new patients got prescriptions last year, double the previous year.

Millions of these patients are children and young adults. Up to 10 percent of school children are estimated to be on the drugs, as well as a third of college students. 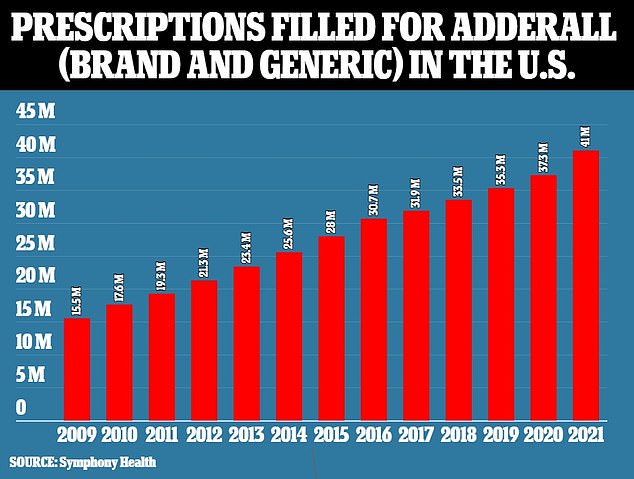 Adderall prescriptions have steadily increased over the last 12 years. The figures include prescriptions for both Adderall, brand and generic, in the U.S. 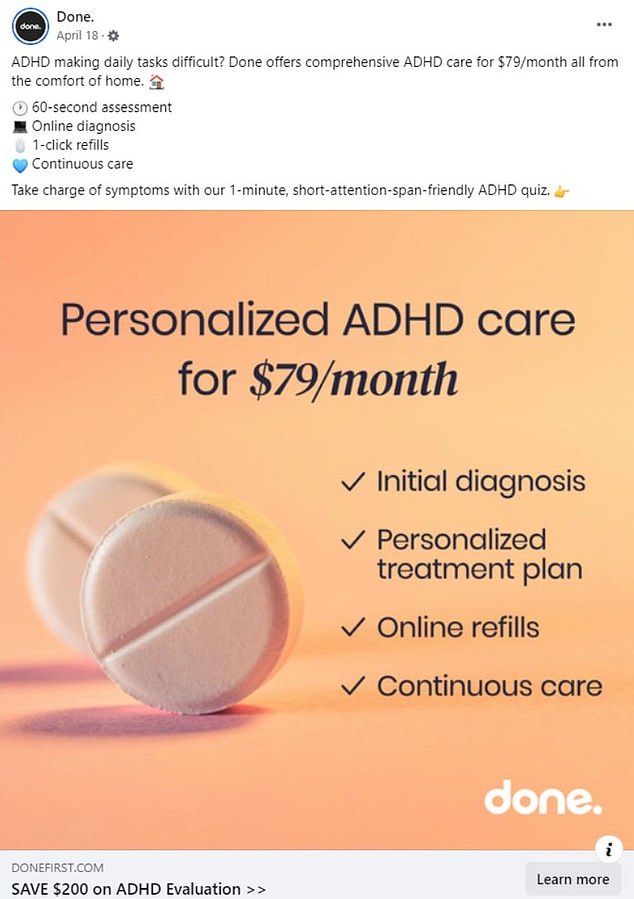 One mother whose 21-year-old son killed himself while playing Russian Roulette with a loaded gun and high on Adderall, said he was able to lie to telemedicine providers to get the drug despite a slew of mental health problems that should have raised red flags.

Adderall is a schedule II drug — the same category reserved for opioids like fentanyl and oxycodone — meaning it has a ‘high potential for abuse, with use potentially leading to severe psychological or physical dependence.

The drug is a combination of two stimulants, dextroamphetamine and amphetamine, used to treat patients with attention deficit hyperactive disorder (ADHD).

These stimulants ramp up activity in the central nervous system, which controls pathways in your brain and spinal cord responsible for most bodily functions.

Experts believe ADHD is caused by an imbalance of the hormones dopamine and norepinephrine in the brain.

Not having sufficient levels of these hormones can lead to symptoms like an inability to focus and low motivation.

Adderall works by causing the brain to release extreme amounts of dopamine and norepinephrine. 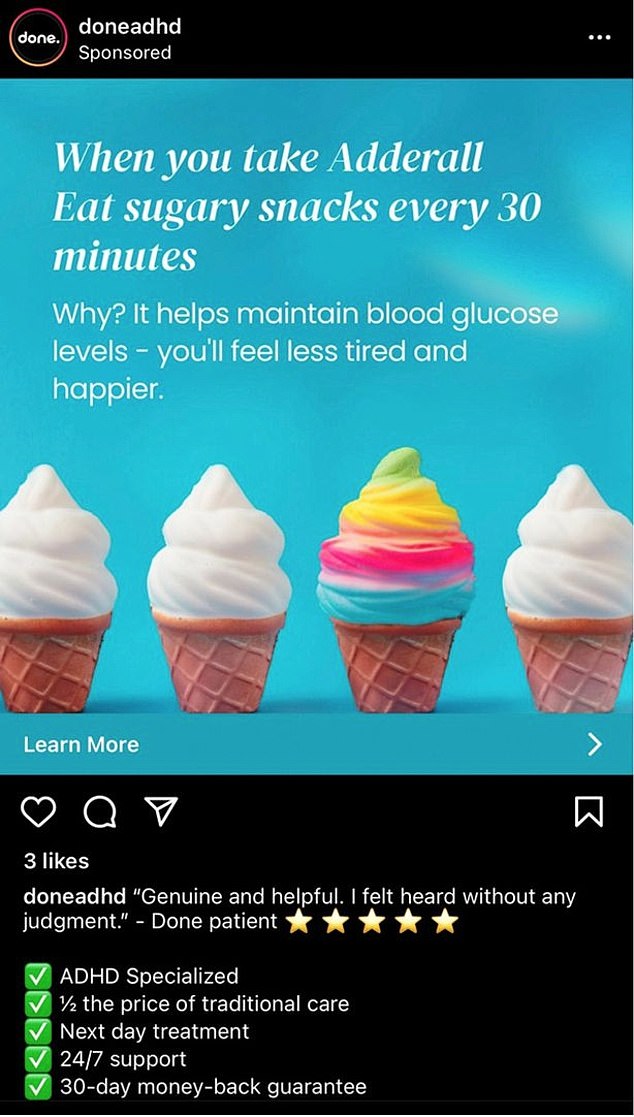 A separate, brightly-colored advert on Instagram features ice cream cones and tells patients to consume sugary snacks every 30 minutes while on the drug

ADHD overprescription could be as bad as OPIOID CRISIS, DEA says 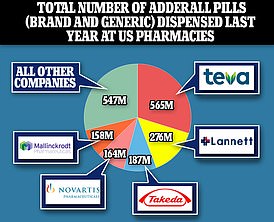 The DEA has likened factors leading to the overprescription of Adderall to those behind the opioid crisis.

But this can become dangerous when abused and used excessively. If a high enough dose is taken, the user will experience euphoria likened to molly or MDMA.

Adderall may cause sudden death or strokes among children and adults, especially those with heart defects or serious heart problems.

Around 1,000 Americans die from prescription stimulants and benzodiazepines like Adderall and Xanax every year.

This can lead to exhaustion, severe mood swings, irritability, and restlessness during the day.

A chronic lack of sleep can also raise the risk of a host of mental health issues, including depression, anxiety and delusions.

Weight loss is also a potential side effect of Adderall addiction. This can happen due to decreased appetite or excessive exercise.

Adderall increases the amount of glucose — or sugar — released into the body, which increases blood sugar levels and can lead to stomach pain and diarrhea.

Those who have taken the drug for a long time or misused it will develop a physical dependence on the drug, and experience withdrawal symptoms when they try to come off, including depression, irritability and problems sleeping. 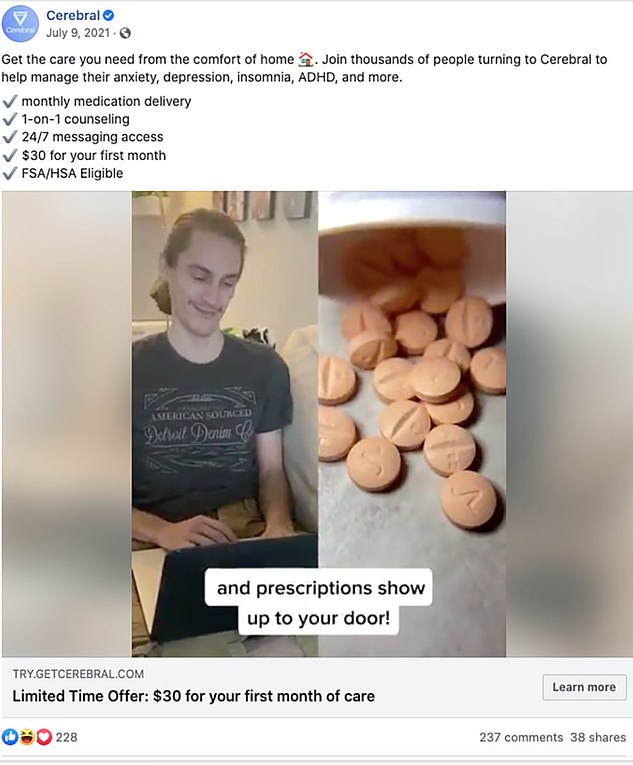 Cerebral and Done have both stated they do not pressure clinicians and provide essential services but the DEA is currently investigating the prescribing practices of the companies. Pictured, a snapshot from a Cerebral video ad that ran in 2021 on Facebook 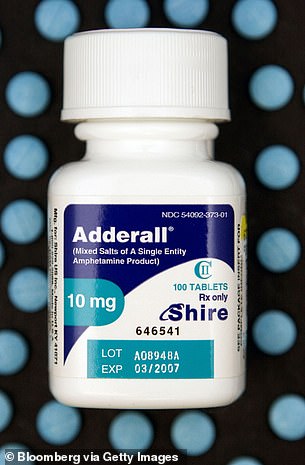 With the advent of telemedicine and Covid, Adderall prescriptions have surged from 35.8million in 2019 to 41m in 2021.

There are fears the overprescription of the drug is leading to a new wave of addictions on par with the opioid crisis.

Telemedicine companies saw their profits grow to monumental levels over the pandemic.

Cerebral Inc — which is currently under investigation for aggressively advertising Adderall on Facebook and Instagram — hit a valuation of $4.8billion a little over two years after it was founded in 2020.

Done Global Inc — also under investigation for its prescribing practices — has seen its revenues quickly eclipse the $3million offered, people familiar with the company told Bloomberg.

The top maker of Adderall for the US market — accounting for more than 80 percent of all sales worldwide — is Israel-based Teva Pharmaceuticals.

The company has a revenue of some $3.59billion a year and specializes primarily in generic medicines.

There are fears that overprescription of the drug raises the risk of more patients becoming addicted, in turn putting further pressure on healthcare services.

It also means ADHD sufferers who need the drug are struggling to get hold of the treatment.

In October, some patients warned they were considering turning to the black market just to fill their prescriptions.

And others said they were having to visit more than 40 pharmacies to ensure they could get the treatment.

The Food and Drug Administration (FDA) declared a shortage of Adderall the same month, about 90 days after suppliers warned of shortages.

Teva blamed the situation on heightened demand as well as labor shortages at its factories.

Last month a mother blamed lax Adderall prescription rules brought in during the Covid pandemic for her son’s death.

Elijah Hanson was found dead on the kitchen floor in Tacoma, Washington, on June 25 after filming himself playing Russian Roulette with a loaded handgun.

The 21-year-old had been written a prescription for Adderall by a telemedicine pharmacy despite suffering from red-flag mental health issues, his brother Ethan said.

Mother Kelli Rasmussen, blamed Adderall for his suicide, telling CBS that despite her son not having ADHD he was still able to secure a prescription for the drug by lying to telehealth providers.

The Drug Enforcement Agency (DEA) is legally required to set production quotas each year for ingredients in Schedule II drugs.

In December, the DEA announced that it would not permit any increase in the production of pharmaceutical ingredients used to make Adderall and other stimulants for ADHD treatment in 2023.

The DEA’s decision to limit production, coupled with a rise in prescriptions since the start of the COVID-19 pandemic, has reportedly contributed to a shortage of Adderall, as noted by the U.S. Food and Drug Administration in October.

What is Adderrall? The stimulant taken by one in EIGHT Americans

Adderall is a combination of two stimulant substances, dextroamphetamine and amphetamine.

These bind to receptors on neurons, causing the release of two hormones that help people to be more alert and focused.

What does Adderall do in the body?

Once consumed orally, the drug triggers the release of dopamine — or the feel-good hormone.

It also causes more norepinephrine — a stress hormone — to be released, doctors say.

This raises blood flow to an area of the brain linked to attention and response, helping to boost focus.

For people suffering from ADHD, this helps to improve their focus and attention while reducing hyperactive and impulsive behavior.

But for non-ADHD patient taking Adderall, they will likely ‘feel high’ and have a sense of euphoria — running the risk of addiction.

How many prescriptions are there in the US?

Prescriptions of Adderall surged over the Covid pandemic by some five million, estimates suggest.

Before Covid struck it was only possible to get the drug after an in person consultation with a clinician.

But when the pandemic virus arrived these rules were relaxed to allow it to also be prescribed after a virtual consultation.

This has led to many telemarketing startups springing up, which offered the drug via adverts posted on social media platforms including Instagram and Facebook.