Pensioner’s bowels nearly ‘explode’ from a build-up of faeces

An elderly man’s bowels almost ‘exploded’ because he was so constipated, it has been claimed.

The unnamed patient, 80, from Taiwan, was found collapsed in his living room by family members.

He was taken to hospital, where he confessed to doctors that he had not been able to defecate for an entire week. 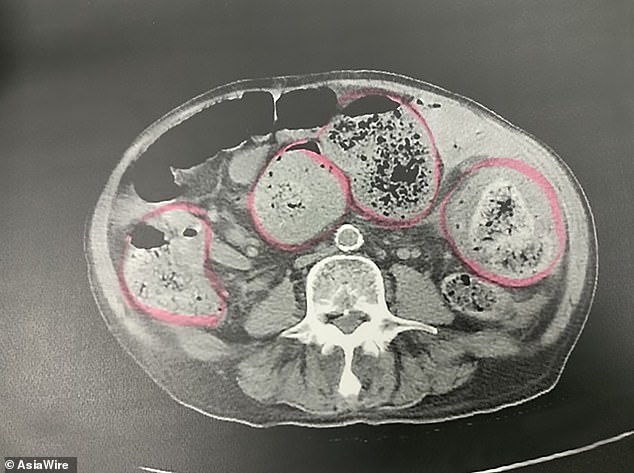 An elderly man’s bowels almost ‘exploded’ because he was so constipated, it has been claimed. Medics took scans and found around 30cm of hardened faeces had built-up in his stomach, according to local media 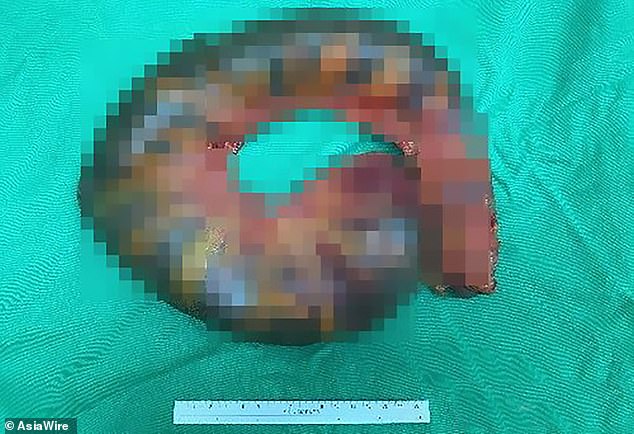 The unnamed patient, 80, from Taiwan, was found collapsed in his living room by family members. Doctors had to remove part of his bowel full of excrement

Medics took scans and found around 30cm of hardened faeces had built-up in his stomach, according to local media.

Surgeons at Chung-Ho Memorial Hospital in Kaohsiung reportedly had to cut out a foot-long section of his bowel because of the accumulation.

They said he had necrotic bowel tissue, which was allegedly full of excrement. The man had a temperature of 39°C (102°F), signalling a fever.

CAN YOUR BOWEL EXPLODE FROM CONSTIPATION?

Constipation can lead to faecal impaction if left untreated for a long time.

Faecal impaction is a large, hard mass of stool that gets stuck and cannot be passed.

It isn’t common, but can cause severe problems, such as perforation – a rupture or hole in the bowel.

The elderly are most often affected but may not be diagnosed quickly and suffer fatal outcomes.

Complications of faecal impaction include urinary tract obstruction, perforation of the colon, dehydration and rectal bleeding.

The treatment of a faecal impaction usually requires extraction of the stool.

If unrecognised or untreated, a faecal impaction may lead to significant morbidity and mortality.

In one study, published in BMC Geriatrics in 2016,  intestinal perforation occurred in 145 of 280 reported clinical cases (51 per cent).

Death due to complications was reported in 78 cases (29 per cent), with perforation linked to a high mortality rate.

Hsieh Yi-chien, one of the medics who treated the patient, suggested the man’s bowels could have ‘exploded’ from the build-up, which could have led to sepsis.

It is not clear how the man’s condition reached this severity.

But in cases of untreated constipation, a person may suffer with faecal impaction, whereby a hard mass of faeces gets stuck.

The pensioner remained under observation for two more weeks before being discharged, Apple Daily reports.

Constipation is a common problem and can usually be cleared up by diet or lifestyle changes.

Potential causes include not getting enough fibre from fruit and vegetables, not drinking enough fluids, or side effects from certain medications.

After a long bout of constipation, people may experience diarrhoea, which can exacerbate the problem if anti-diarrhoea tablets are taken.

Left untreated, it can be fatal – especially among the elderly who are more likely to get faecal impaction.

Complications include rupture of the bowel which has a high mortality rate.

It comes after MailOnline last August revealed the similar situation of a 24-year-old man, thought to be from London.

The unnamed patient’s bowel became so full with faeces it burst – causing his organs to start shutting down, according to doctors writing in BMJ Case Reports.