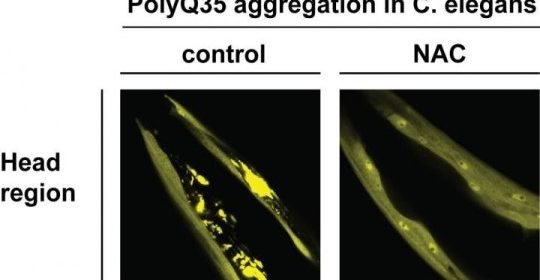 Researchers from the Universities of Konstanz (Germany), Leeds (UK) and Stanford (USA) have discovered that the nascent polypeptide-associated complex (NAC) helps to prevent the aggregation of proteins associated with several neurodegenerative diseases.

Numerous devastating neurodegenerative disorders in humans, such as Huntington’s and Alzheimer’s disease as well as a disease known as spinocerebellar ataxia, are linked to specific cellular proteins which accumulate in the cell. The proteins form damaging plaques and cause the progressive dysfunction and death of neuronal cells in the brain.

The new findings were discovered by an international team of scientists from the University of Konstanz’s Collaborative Research Centre 969 “Chemical and Biological Principles of Cellular Proteostasis” (Germany), the interdisciplinary Astbury Centre for Structural Molecular Biology at the University of Leeds (UK) whose research focus is “Life in molecular detail,” and the Departments of Biology and Genetics at Stanford University (USA).

The key molecular chaperone, NAC, is a protein complex found in all eukaryotic organisms, and is required for healthy cellular activity. NAC is known to bind to ribosomes within the cell to facilitate the production of new proteins, and is only now being understood for its additional role in preventing cellular degeneration, through its effects beyond the ribosome.

As Elke Deuerling, Professor for Molecular Microbiology at the University of Konstanz and one of the lead authors on the study “Dual role of ribosome-binding domain of NAC as a potent suppressor of protein aggregation and aging-related proteinopathies,” which is due for online publication in the journal Molecular Cell on 11.04.2019, emphasizes: “What is so fascinating about this is that NAC can recognise different types of aggregation-prone proteins and prevent them from aggregating. NAC is a very abundant cellular protein and seems to be involved in many processes that maintain cell fitness, health and functionality. We believe it to be one of the most important chaperones in the cell.”

NAC occurs in all eukaryotes from yeast to man and was first described over 25 years ago. Its precise functions, however, which are vital to the survival of organisms, have remained largely unstudied for a long time. The current paper is the first to demonstrate conclusively that NAC exerts chaperone activity off the ribosome toward structurally diverse substrates including polyglutamine (PolyQ)-containing proteins and Amyloid-β 40 (Aβ40) peptides. Importantly, NAC suppresses PolyQ aggregation and enhances the organismal fitness in vivo, as tests with the animal model system C. elegans conducted by the University of Konstanz team led by Drs Martin Gamerdinger and Elke Deuerling, assisted by their co-workers Karina Gense, Nadine Sachs and Renate Schlömer, show.

PolyQ analyses of neuronal mice cells carried out by Professor Judith Frydman at Stanford University and her team, including one of the first authors, Dr Koning Shen, assisted by Rebecca Chan, revealed that a reduction of NAC caused catastrophic damage within cells producing toxic PolyQ proteins, providing further evidence of the crucial role NAC plays with regard to suppressing protein aggregation.

The international research team identified the positively charged ribosome-binding N-βNAC subunit (N-βNAC), which is merely 40 amino acids long, as the crucial NAC domain responsible for exerting chaperone activity off the ribosome. The Stanford team demonstrated that a small peptide within this sequence can successfully prevent aggregation of disease-linked polyglutamine-expanded proteins, including Huntingtin, causing Huntington’s disease, and Ataxin-3, causing a form of ataxia. “This came as a huge surprise,” comments Martin Gamerdinger. “What this implies is that N-βNAC effectively fulfils a dual role: It is responsible for binding NAC to the ribosome and, off the ribosome, for inhibiting protein aggregation of PolyQ proteins.”

A key step in the discovery of the role of NAC was to find out how it recognises and binds the damaging proteins, and prevents them from aggregating. An important contribution was made by Professor Sheena Radford and her team, including Esther Martin, Antonio Calabrese, Patrick Knight and Katie Stewart, in the Astbury Centre for Structural Molecular Biology at the University of Leeds, where Sheena Radford is Director.

The Leeds team chemically linked NAC to two proteins it helps to protect from forming toxic aggregations in the cell, Ataxin-3 and Amyloid-β 40, which are associated with spinocerebellar ataxia and Alzheimer’s disease, respectively. Mass spectrometry experiments were then used to find out which precise parts of the chaperone and proteins were linked together. The results were clear cut and surprising. “We found that one specific region of the NAC chaperone binds Ataxin-3 and when added in isolation is sufficient to inhibit PolyQ aggregation,” says Professor Sheena Radford. “However, looking at Amyloid-β 40, we found that there is at least one more chaperone domain within NAC that we have yet to uncover. We can clearly see the effects that this domain has — it completely suppresses protein aggregation in both cases. But we have not been able to identify this second binding site for Amyloid-β 40 yet.”

One future task for the researchers will be to identify these unknown NAC substrate interaction domains. Another will be to further develop the results of the study for medical application. “Being able to clearly identify one important chaperone domain within NAC has huge implications for the development of therapeutic approaches to help combat neurodegenerative disorders,” Professor Judith Frydman stresses. “Increasing the concentration of NAC in cells to suppress protein aggregation isn’t universally beneficial. But being able to work with the small NAC fragment N-βNAC — or with even smaller peptides only 20 amino acids long that we managed to identify within N-βNAC — could be a game changer. We may not be able to cure diseases such as Huntington’s or Alzheimer’s any time soon, but we may be able to delay their progress.”