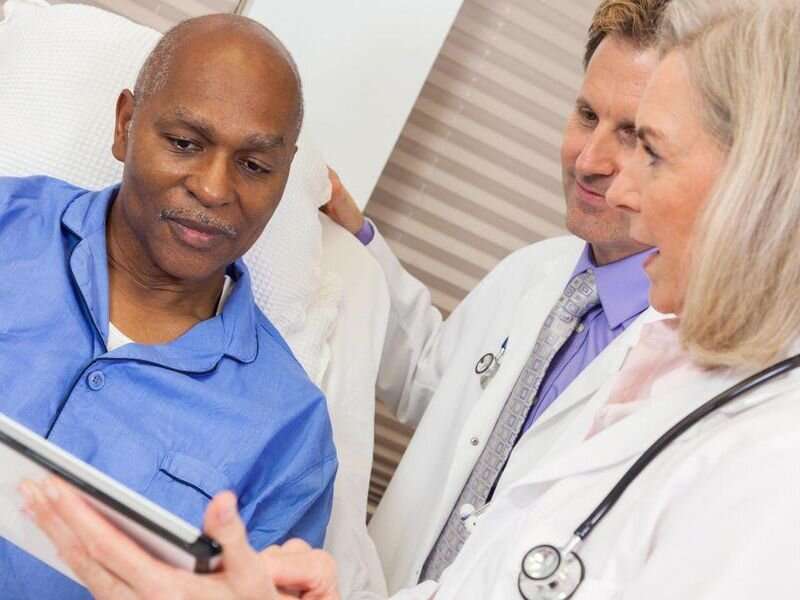 If someone is stricken with a blood cancer or life-threatening clot, they’ll probably fare better if they are white and wealthy, three new studies show.

The ongoing impact of patient race and income to medical outcomes was in the spotlight Saturday in New Orleans at the annual meeting of the American Society of Hematology (ASH).

In one study, a team led by Dr. Matthew Maurer, of the Mayo Clinic in Rochester, Minn., looked at who got enrolled (or didn’t) in clinical trials for new treatments against a blood cancer known as diffuse large B-cell lymphoma (DLBCL).

It’s the most common form of lymphoma in the United States. According to ASH, existing therapies help cure about 60% of patients, but another 40% may not be helped.

So, enrollment in clinical trials can be crucial for some patients. The Mayo study examined data on enrollment in DLBCL trials from eight large academic medical centers across America.

It found that 76% of enrollees were white.

Results from lab tests were key to getting accepted into the trials, but Black or Hispanic Americans were much less likely to meet those lab-based criteria than were whites, the research showed.

That means trial organizers may need to take a closer look at lab-based eligibility criteria to help level the playing field for entry into future clinical trials. “These exclusion criteria are not impacting everyone equally—they’re impacting minorities more than white non-Hispanic patients,” Maurer said in an ASH news release.

Another study looked at stem cell transplants that in many cases can cure a blood cancer. The procedures necessitate finding a donor (often a family member) with the same blood antigen proteins as the patient.

If such a donor can’t be found, doctors can still perform the transplant, but it often uses cells that are “half-matched” and come from either umbilical cord blood or less-than-ideally matched family members or others. These transplants leave patients more vulnerable to dangerous immune reactions and require more intense follow-up care.

The study was led by Dr. Warren Fingrut, of the Cord Blood Transplantation Program at Memorial Sloan Kettering Cancer Center in New York City. Looking at records from 372 people who underwent stem cell transplants at the center between 2020 and 2022, his team found that while only about one-quarter (24%) of patients with European (typically white) ancestry had to undergo the less well-matched form of transplant, that number rose to 58% among patients who were not of European descent.

The likelihood of a more complex stem cell transplant being needed rose even higher if the minority patient also came from a low-income household, the investigators found.

“Our transplant program is very committed to extending transplant access to minority populations, but our study highlights that many of these patients are both receiving the most complex transplants and facing significant socioeconomic challenges,” Fingrut said in the ASH news release. “Our findings show that addressing financial hardship will be critical to extend transplant access, especially to patients from minority groups.”

Advanced treatments for a dangerous clot

In a third study, researchers found that race and income seemed to matter when U.S. patients were hit by potentially life-threatening clots in the lungs known as pulmonary embolisms.

Non-white and poorer patients were “significantly less likely to receive the most advanced therapies and more likely to die after suffering a pulmonary embolism,” the ASH news release noted.

The study involved data on more than 1 million U.S. patients hospitalized with a dangerous clot in the lungs between 2016 and 2018. Over 66,000 had the most severe, life-threatening form of pulmonary embolism.

Compared to white patients, Asian patients were 24% less likely to receive advanced therapies when hit by a severe form of pulmonary embolism, and they were 50% more likely to die, reported a team led by Dr. Mary Cushman, of the Larner College of Medicine at the University of Vermont.

Likewise, Black patients in the same situation were 13% less likely to get the best treatments compared to white patients, and were 11% more likely to die. Hispanic patients were also 10% more likely to die from their embolism than white people were, the investigators found.

Money and insurance also mattered: Folks insured via Medicaid or Medicare were 30% less likely to get an advanced therapy compared to the privately insured, the study found. And people who placed in the lowest one-quarter with regards to income were 9% more likely to die from their clot compared to folks placing in the top quarter of income.

“Many people die of pulmonary embolism every year,” Cushman noted in the ASH news release. “It’s preventable and it’s certainly treatable. We need to think about what we can do in hospitals to make sure that care is equitable.”

“I hope that clinicians will think about these findings in terms of how they take care of patients every day, and try their best to recognize their unconscious biases,” she added. “Clinicians need to look at the patient in front of them and remember that regardless of their social class or the color of their skin, they should be treated the same as everybody else.”

Experts note that studies presented at medical meetings should be considered preliminary until published in a peer-reviewed journal.

More information:
Find out more about blood cancers at the American Cancer Society.