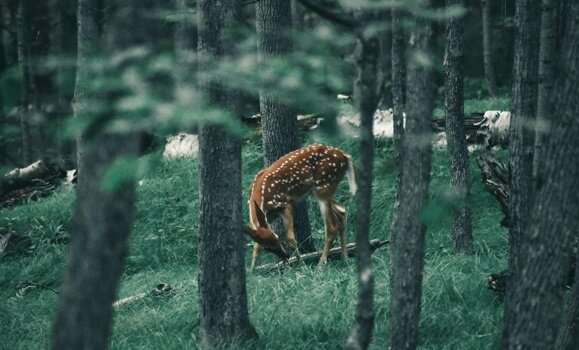 A team of researchers from Dalhousie and other Canadian organizations has discovered what could be the first link between a case of COVID-19 in deer and humans, suggesting in a new paper that the virus can be transmitted from wildlife to people.

Finlay Maguire, a data scientist and assistant professor in Dal’s Faculty of Computer Science and Department of Community Health & Epidemiology, participated in the national research project that has been monitoring the spread of SARS-CoV-2 in animals.

The paper, which has not yet been peer-reviewed and is published on the online preprint server bioRxiv, explains that while there is evidence of spillover of the COVID-19 virus from humans to white-tailed deer there has not yet been any clear finding of such transmission from deer to people.

“In terms of this specific lineage, it is not highly concerning as of now. We haven’t detected any additional related human cases and experimental work suggests that current mRNA vaccines would be effective at protecting against this lineage,” says Dr. Maguire.

“However, the general evolutionary scenario this represents is of concern: SARS-CoV-2 viruses undergoing extensive evolution within animal populations and then transmitting back to humans.”

The multidisciplinary team, made up of researchers from several universities, federal, and provincial government agencies, identified a new and highly divergent lineage of SARS-CoV-2 that has 76 mutations, including 37 previously associated with animal hosts. Of those, 23 were not previously reported in deer.

Analysis also revealed an epidemiologically linked human case from the same region of Ontario during the same sampling period.

“Together, our findings represent the first evidence of a highly divergent lineage of SARS-CoV-2 in white-tailed deer and of deer-to-human transmission,” the authors state.

The discovery is significant since scientists have been keeping a close eye on wild animal populations to determine whether they could generate new variants or harbor the current SARS-CoV-2 virus.

The team analyzed samples from hundreds of deer killed by hunters in Ontario in 2021. They compared the pattern of mutations in virus from the deer and a person who had been in contact with deer in the area, finding strong similarities. They also used those patterns to try and recreate the “family tree” of these viruses, which tells them the virus they found in a human is likely recently descended from a deer SARS-CoV-2 virus.

By sequencing this virus, they also found signs that suggest it has been spreading and evolving within deer for the last one to two years. And, that is had a very different genetic profile from the omicron and delta variants.

Scientists have long known that SARS-CoV-2 can infect a large range of mammals and likely first originated within animal populations, with research pointing to a market in Wuhan, China, as the origin of the coronavirus pandemic. New studies recently found that the virus was likely present in live animals sold in a seafood market in late 2019 and infected people working or shopping there.

SARS-CoV-2 has been identified in wild white-tailed deer across North America. This is potentially a problem as there are a lot of deer, they move around a lot and they have a lot of contact with humans and other animals, says Dr. Maguire.

“This means if SARS-CoV-2 is able to stably spread within deer and transmit back to humans it could represent a difficult-to-control source of new variants.”

“Our findings likely represent the latest hop of the virus between animals and humans: from animals into humans during the original Wuhan event(s), back into animals such as mink and deer around 2020, then this latest transmission from deer to a human.”

Dr. Maguire says the findings point to the need for greater monitoring and study of viruses in wild animal populations, saying “the limited amount of work looking at SARS-CoV-2 in animals means there is a lot of missing information about the specifics of how, when, and why these transitions occur or their impact on human health.”