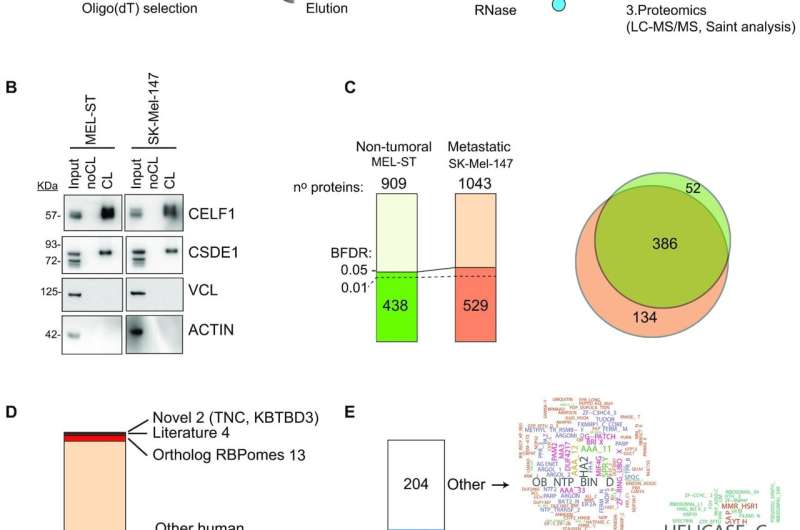 Researchers at the Center for Genomic Regulation (CRG) have identified several proteins involved in the progression of melanoma, the deadliest form of skin cancer. One of the proteins—PDIA6—was found to be particularly important for driving malignancy. Experiments with mice showed that melanoma cells with reduced levels of PDIA6 had an impaired ability to metastasize to the lung.

The researchers found that PDIA6 promoted melanoma malignancy by binding to RNA molecules inside the tumor’s cell. The authors of the study, published in the journal Nucleic Acids Research with the support of “La Caixa” Foundation identified the region on the surface of PDIA6 that binds to RNA molecules. With further research, this information can help design new therapeutic compounds that prevent the spread of melanoma from one part of the body to another.

PDIA6 has been previously linked to the progression of lymphoma, breast and lung cancer. If further research finds that PDIA6 also binds to RNA in these other cancer types, it could lead to a therapeutic strategy that targets the same mechanism of action across different tumors.

The finding was made possible thanks to an “RNA fishing” technique specifically designed to identify RNA-binding proteins. These are a class of proteins that carry out a variety of biological functions, an in cancer, confer resilience to cells by helping them adapt to changing environments and quickly respond to external threats, promoting cancer malignancy and resistance to therapy.

The technique, also known as RNA interactome capture, involves fishing out all messenger RNAs in a cell. Researchers then see which proteins are attached to them, which informs on the level and diversity of RNA-binding activities taking place inside the cells.

“RNA-binding proteins are of great therapeutic interest. The technique in this study can help us measure their activity, something not possible at such global scale with conventional methods. When used to compare tumor and non-tumor cells, the approach helps us identify which proteins might play important roles in cancer progression, and carrying out further experiments tells us how they work. We used this blueprint to uncover new vulnerabilities in melanoma, and we hope this can be repeated to find new therapeutic targets in other types of cancers too,” explains Dr. Fátima Gebauer, researcher at the CRG and senior author of the study.

Out of the hundreds of RNA-binding proteins identified by the technique, the researchers selected 24 to carry out further analysis using varied criteria, for example because their RNA-binding activity had not been described or they were not previously linked to cancer progression. The researchers singled-out PDIA6 to further characterize its function, including transplantation experiments in mouse models. Future studies could delve into the roles of the other 23 proteins found.