Scones with jam and clotted cream can have more than 1,000 calories

Now they’re telling us not to eat scones! Health officials warn the tea-time favourite can have more than 1,000 calories when enjoyed with jam and cream

Health officials have warned scones could seriously damage our waistlines.

When eaten plain, the afternoon tea favourite can contain a whopping 740 calories and ten cubes of sugar, according to a survey by the Food Standards Agency (FSA).

And when enjoyed with clotted cream and jam, the indulgence can have more than 1,000 calories – half our recommended daily intake, the FSA adds. 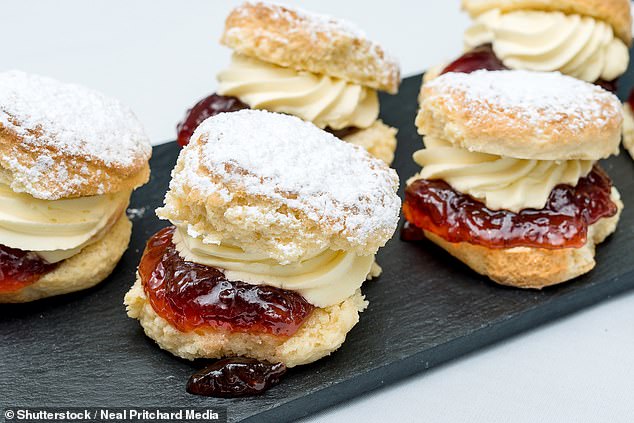 Multinational chains such as Starbucks, Costa, Caffè Nero and Greggs were excluded from the study.

Results revealed a fruit scone was the most calorific with 750kcal and 39.2g of sugar – the same as a can of Coca Cola.

The NHS recommends we have no more than 90g of sugar a day, which includes that which naturally occurs in fruit and dairy.

Men are typically advised to have around 2,500 calories a day and women 2,000kcal.

The survey – published online in the Nutritional Content of Scones Report – also found a raspberry and white chocolate luxury scone had the highest fat content at 22.7g.

HOW THE GOVERNMENT IS TRYING TO STOP OBESITY

Proposed plans to restrict the number of calories in pizzas, pies and ready meals were last year revealed as part of drastic Government moves to try and cut down on obesity.

A tax on added sugar in drinks came into force in April, requiring companies to hand over more of the money they make from drinks which contain more than 5g of sugar per 100ml of liquid.

As a result, many soft drinks have had their recipes changed in order to avoid paying the tax and putting prices up. Sugary drinks are the biggest single source of sugar for children and teenagers.

The Government is also considering making it compulsory for all restaurants and fast food outlets to display the number of calories in each meal on their menu.

Some food outlets already do this but there can be unexpected numbers of calories in popular dishes, and the Government is consulting on the plans before a decision is due in spring.

In March this year, Public Health England warned Brits to crack down on the number of calories they’re eating, advising people to consume no more than 1,600 per day.

The watchdog says adults shouldn’t eat any more than 400 calories for breakfast, 600 for lunch and 600 for dinner – this would allow for some snacks, experts said.

Examples of 600-calorie meals include a tuna pasta salad and a small cereal bar, a chicken salad sandwich and a pack of crisps, or half a pepperoni pizza with a quarter of a garlic baguette and a banana.

The NHS advises we eat no more than 70g of fat a day, healthier forms of which are found in meat, oils and nuts.

Fionnuala Close, senior dietary health adviser at the FSA in Northern Ireland, said: ‘Typically, our diets contain too much sugar, saturated fat and salt yet, at the same time, we’re not consuming enough fruit, vegetables and wholegrain foods.

‘As scones tend to be a regular favourite for many across Northern Ireland, we felt it was important to raise awareness that this common snack can contain a greater number of calories than consumers may think.

‘The availability of choice, in terms of ingredients and scone size, is an important consideration for consumers and producers alike.

‘Our role is to make people aware of the nutritional content of what they’re eating so they can make choices which contribute to a healthy lifestyle and a balanced diet.’

But some scones were practically slimline, with just 154 calories.

Portion sizes also varied by 189g with some baked goods weighing 233g and others just 44g.

On average, a scone in Northern Ireland contains 20g of sugar – the equivalent of five cubes.

But the amount of sugar varied from 3.1g to 39.2g, with fruit scones being the sweetest.

Around 64 per cent of adults and 27 per cent of children aged two-to-15 in Northern Ireland are overweight or obese, the report revealed.

Obesity is also a problem in the rest of the UK, with 26 per cent of adults being classified with the eating disorder in 2016, compared to just 15 per cent in 1993, NHS Digital statistics show.

And more than two in three adults in the US are overweight or obese, according to the National Institute of Diabetes and Digestive and Kidney Diseases.

The FSA carried out the survey as part of its Know Your Calorie campaign, which aims to educate people on how fattening their favourite foods are.