Shoulder surgery has serious side effects in one in 28 patients

Shoulder-replacement surgery leads to blood clots, infections and even DEATH in one in 28 patients: Scientists discover the operation is risky and the benefits often don’t last

Shoulder-replacement surgery causes serious side effects in one in 28 patients, research suggests.

A study found those who choose to have their damaged shoulder ‘ball’ replaced with a metal implant are at risk of everything from blood clots and infections to heart attacks and even death within 30 days of going under the knife.

Although becoming increasingly popular among arthritis sufferers, the benefits of the operation also rarely last, with as many as one in four requiring revision surgery. 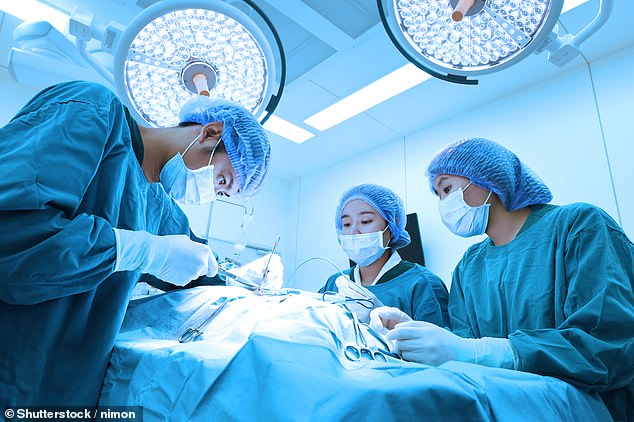 The study was carried out by the University of Oxford and led by Dr Richard Craig, a research fellow at the department of orthopaedics, rheumatology and musculoskeletal sciences.

‘Although the number of replacements do not yet match those of the hip and knee, recent trends from international joint replacement registries show a rapid increase in the incidence of primary shoulder replacements performed,’ Dr Craig said.

‘Despite this growth, no large scale trials and very few published studies have been carried out on the long-term outcomes across different age groups, including the risks of revision surgery.’

Total shoulder-replacement surgery involves swapping both the ‘ball’ and socket with an implant.

It is most often carried out in arthritis patients whose condition affects their shoulder and causes the lining of the joint’s surfaces to wear, leading to pain and stiffness.

Although generally considered a safe procedure, all surgeries have risks.

These can include infection, bleeding, nerve injury, dislocation and blood clots.

Total-replacement surgery is generally only recommended if painkillers, injections, exercise and physio have been tried unsuccessfully.

Most patients stay in hospital for around three days after the procedure to recover.

The arm will be in a sling for about three weeks.

To uncover the risks, the researchers analysed 51,895 patients over 50 who opted for shoulder-replacement surgery between April 1998 and 2017.

During this time, the number of operations skyrocketed by 5.6 times.

Most of the patients had osteoarthritis but inflammation, trauma and loss of blood to the bone, known as osteonecrosis, were also behind the procedures.

Results – published in The BMJ – revealed one in 28 patients suffered a serious adverse event (SAE) within 30 days and one in 22 within 90 days.

Of the male patients who were 85 and over, one in five had a SAE within 90 days.

And the chance of requiring revision surgery – to replace a failed implant – was one in 37 among women aged 85 and over.

For unclear reasons, younger men were more likely to have to go back under the knife, with one in four aged 55-to-59 needing revision surgery.

The researchers worry that as the public ages, the number opting for shoulder-replacement surgery will rise.

They urge doctors to make patients aware of the risks, particularly that younger men may require another operation to replace a failed implant.