‘Stop ignoring the dangers of vaping’, scientist warns Public Health England as he accuses the government body of turning a blind eye to e-cigarettes’ health risks and appeal to children

A leading academic has criticised health officials for ‘promoting’ e-cigarettes despite growing evidence of their harms.

Professor Martin McKee, of the London School of Hygiene and Tropical Medicine, said there are grounds for ‘serious concerns’ about e-cigarettes.

But Public Health England (PHE) recommends they be prescribed on the NHS, controversially claiming they are 95 per cent less harmful than cigarette smoking.

Last year it campaigned for smokers to switch to e-cigarettes, including as part of its annual ‘Stoptober’ quitting campaign. 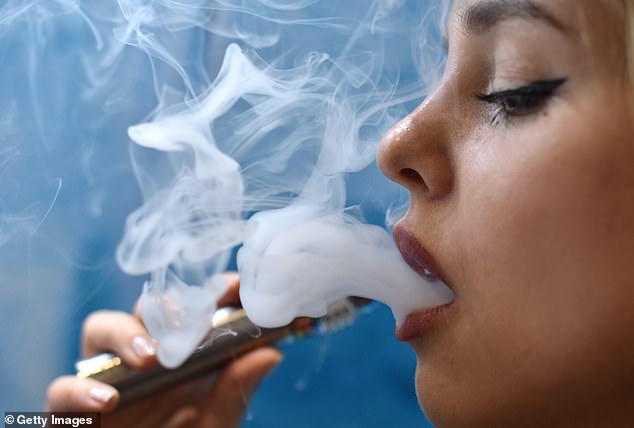 Past research has shown e-cigarettes are capable of damaging the blood vessels and potentially the heart by triggering inflammation (swelling) which, if continued over a long period of time, can cause permanent tissue damage (Pictured: A model using an e-cigarette the Vape Jam trade show in London earlier this month)

Professor McKee, a long-term critic of the promotion of the devices, said PHE ‘seems to be doing everything it can to promote e-cigarettes’, while choosing to ignore global warnings over the risks.

He said: ‘The nicotine in e-cigarettes is not a harmless drug and then there all these other things such as flavourings that are inhaled.

‘We haven’t had e-cigarettes for long enough to know the true effects. But when we look at the evidence we do have, there’s enough grounds for serious concerns.

‘Given the short-term effects on lung function and cardiovascular effects, there is enough evidence to say we should be very, very careful.’

The expert added: ‘It’s not whether e-cigarettes are safer than cigarettes, it’s whether they are actually safe.’

Many scientists are concerned about the safety of e-cigarettes, which are feared to be very attractive to young people and have been used by around three million British adults in the decade or so they have been available.

In the US, authorities have threatened to strip vaping devices and e-cigarettes off the shelves unless manufacturers do more to curb a rise in teenage use.

The devices contain a liquid form of nicotine which is heated into a vapour to be inhaled, avoiding the lung cancer risk from tobacco smoke.

HOW COULD VAPING BE HARMFUL?

The flavourings in electronic cigarettes may damage blood vessels in the same way as heart disease, according to research published in June.

The chemicals used to give the vapour flavours, such as cinnamon, strawberry and banana, can cause inflammation in cells in the arteries, veins and heart.

They causes the body to react in a way that mimics the early signs of heart disease, heart attacks or strokes, the study by Boston University found.

Other recent studies have also suggested smoking e-cigarettes could cause DNA mutations which lead to cancer, and enable pneumonia-causing bacteria to stick to the lungs easier.

Researchers at New York University subjected human bladder and lung cells to e-cigarette vapor, which is marketed as being healthier than tobacco.

They found the cells mutated and became cancerous much faster than expected and mice exposed to the vapour also suffered significant DNA damage.

The vapour from e-cigarettes helps bacteria which cause the condition to stick to the cells that line the airways, they said.

The effect occurs with traditional cigarette smoke and those who are exposed to air pollution high in particulates from vehicle exhausts.

But diacetyl, used in e-cigarette flavourings, may lead to an incurable condition called ‘popcorn lung’.

Research on animals has linked electronic cigarettes to certain cancers and heart disease.

Last year a study led by the University of Birmingham found vaping triggers damaging inflammatory chemicals in the airways.

Over time this may lead to COPD – the umbrella term for chronic respiratory conditions including bronchitis and emphysema.

Dr Aaron Scott, who led the study, said: ‘We don’t know what the long-term data is but we have shown that it’s cytotoxic and it’s pro-inflammatory, just like cigarette smoke is over the short-term.’

Both Dr Scott and Professor McKee have raised concerns that e-cigarettes may appeal to young people, despite a ban on under-18s buying them.

Professor McKee warned youngsters could become hooked on Juul, an e-cigarette that has been blamed in the US for creating nicotine addiction in children and was introduced to the UK market last summer.

He said: ‘It is now very clear these products are being pushed very hard to children.

‘This creates an entirely avoidable risk of a new generation that will be addicted to nicotine.’

Dr Scott said: ‘You can go into a pound store anywhere in the country and buy e-cigarette liquid for £1. You can do that with very little regulation, so it’s very easy for example for kids to get that – it’s very accessible.’

‘They have been international pariahs and now they’re trying to present themselves as part of the solution.’

Public Health England has claimed that ‘false fears’ over vaping are deterring thousands of people from using them.

Professor John Newton, director of health improvement at Public Health England, said: ‘There is widespread academic and clinical consensus that while not without risk, vaping is far less harmful than smoking.

‘This view is held by many across the world, including the Royal College of Physicians, Cancer Research UK, the British Medical Association and the National Academy of Sciences in the US.’

He added: ‘We are alert to the risks and the UK has taken a careful approach to maximise the opportunities that e-cigarettes present to help more smokers quit.’

Professor McKee said: ‘PHE seem to be ignoring the risks of e-cigarettes, particularly those linked to cardiovascular disease.

‘Very early on it latched on to this figure that electronic cigarettes are 95 per cent safer than smoking, which is very difficult to go back on.

‘But the evidence keeps coming that this is not the case, as PHE continues promoting e-cigarettes in advertisements.’