The 10 healthiest countries in the world

The 10 healthiest countries in the world: Spain takes the top spot but the UK only ranks 19th (so, how does your country fare?)

Spain has been crowned the healthiest country in world in a new league table.

Great Britain placed 19th, while the US only made it to 35th – Australia was the only English-speaking country to make it into the top 10, ranking seventh.

Countries’ life expectancies, smoking rates and obesity were all taken into account by the rankings, as well as access to clean water. 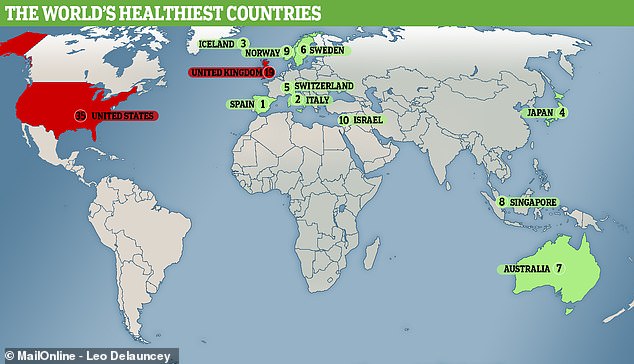 Spain has pushed Italy down to second place in Bloomberg’s healthiest countries ranking, with Iceland and Japan close behind. Australia is the only English-speaking country to make it into the top 10, placing seventh despite a two-place drop from fifth in 2017

Experts suggest the Mediterranean diet, which is known to be good for the heart and circulation, could play a role in Spaniards’ good health.

And Spain officially has the European Union’s longest life expectancy at birth, and ranks third globally – behind Japan and Switzerland, Bloomberg reported.

A study led by the University of Navarra, in Spain, said a ‘Mediterranean diet, supplemented with extra-virgin olive oil or nuts, had a lower rate of major cardiovascular events than those assigned to a reduced-fat diet’.

Italy slipped to the second spot. The rest of the top 10 was completed by Iceland, Japan, Switzerland, Sweden, Australia, Singapore, Norway and Israel.

THE 10 HEALTHIEST COUNTRIES IN THE WORLD

Meanwhile, Macedonia was the biggest faller – dropping 12 places from 44th to 56th.

Scientists regularly publish studies praising the health benefits of the Mediterranean diet, which contains a lot of vegetables, nuts, fish and oils.

It is known to improve heart health and also believed to be good for the brain and liver, and may improve sexual function in men.

Although the Legatum’s Institute ranking is at odds with Bloomberg’s assessment, there is crossover in the top 10 on both lists.

Singapore, Japan, Switzerland, Sweden and Norway all feature in the 10 healthiest countries on both Bloomberg’s and Legatum’s lists.

No African nations made it into the top 50 of today’s index, and only a handful of those in the Middle East did – Bahrain, Qatar, Lebanon, Brunei, the United Arab Emirates and Oman.

Countries in sub-Saharan Africa – where access to clean water and sanitation are lingering issues and deadly diseases are rife – made up 27 of 30 unhealthiest countries.

Haiti, Afghanistan and Yemen were all also among the worst performing.

Consuming more fruit and fish, and fewer sugary drinks and snacks, are the most important aspects of a Mediterranean diet.