The unintended side-effect of mummy fitspo

No siree. We all know that if we’re a self-respecting social-media mother, we don't just grow and pump out a baby, we swap the carbs for a diet of sleep deprivation and cold coffee.

The only crunching we’re doing is of our abdominals, preferably with blow dried hair, baby spew-free workout gear and smile courtesy of Insta-sponsored at-home teeth whitening kit. While our Insta husband takes our photo, bubs sucks contentedly on the baby bar that our supplement sponsor has sweetly provided. Welcome to #yummymummy #fitmom. 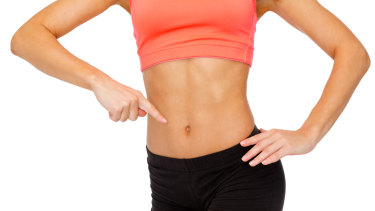 If you don’t “bounce” back with a six pack, are you really doing motherhood right?Credit:Dreamtime

Fitspiration has well and truly infiltrated contemporary motherhood and while there are undoubtedly some incredibly impressive mums out there, for many the deluge (22.7 million #fitmoms, 2.1 million #fitmums and about half a million yummymummies) only adds pressure to "bounce back" and look a certain way during one of the most significant physical and psychological changes of our lives.

Dr Ivanka Prichard has spent years researching body image and the impact of social media. Knowing that previous research revealed as many as 72 per cent of women don’t like their bodies, and research shows there is a spike in the dislike after they have given birth, she and her colleagues wondered about the influence of the growing volume of fitspo content targeting new mothers.

In a new study, Prichard found that exposure to general fitspo images or mum-specific fitspo resulted in greater negative mood among the 173 mums who participated.

While a focus on nourishing ourselves and being active is important for our health at any size, fitspo focuses us on weight loss and one type of body – an idealised, thin body – and, specifically for new mums, on “bouncing back” to their pre baby weight, as quickly as possible.

“They’ve got a photo of them having bounced back, but there’s not the photo where they’ve got spew all over them or their hair hasn’t been done yet – the real parenting moments aren’t there, so it does sell an incomplete message,” Prichard explains. “You can understand why women might feel negative in response to the ideals that they see around them and the morals that might be placed on them.”

And, intentional or not, moral superiority is a thing when #fitspo is produced against a backdrop of publicity about the obesity epidemic, and the ripple effect of parental body image on children.

Prichard found that those who tend to compare their body to other women’s were also “more negatively affected”.

Unlike the many goddesses of Instagram, with their lack of bloating or apparent weight gain beyond their perfectly rounded bumps, I grew more like a fully rounded raisin. Pregnancy didn’t “sit well” on me and, after my daughter was born, I didn’t rebound with a six pack six weeks (or even six months) later.

Thankfully, my body image was relegated to the back seat while appreciation of my body's function took precedence, but the question lingered; if you haven’t “bounced” quickly and aren’t “bouncing” with your hair coiffed, stain-free clothing and jubilant baby,  are you really doing it right?

Other new mums, IRL, felt the same according to Prichard’s research.

“When looking at those fitness images, mothers were comparing, not just their appearance but how much time it might take out of their day to look like that or comparing the time that they have for self care in general,” she says.

The implicit message that new mums need to immediately regain control over their wayward bodies may be an extension of our attitudes towards female bodies in general.

“We place much greater emphasis on the physical form of women,” Prichard agrees. “It’s not to say men arean’t dissatisfied with their bodies … but becoming a dad might provide them with a bit of reprieve from being the buff, muscular man that they might have aspired to in the past because they are sleeping less and they have less time to do exercise because they are looking after the baby. Mums have to do all of that too but we don’t get a reprieve.”

The message new mums need to regain control over their wayward bodies may be an extension of our attitudes towards female bodies in general.

Instagram certainly hasn’t created the issue, but it provides “much more constant exposure to these types of images” Prichard says, and we are no longer just comparing ourselves with celebrities but peers who only post near perfect photos of themselves.

The upside is that we have control over who we follow on Instagram, so we can “curate the material”, and follow those who make us feel better not worse about motherhood.

The point is not to demonise thin, fit women or those who conform to the expectations and want to prove they are doing motherhood “right” one six pack at a time, it is to recognise the influence of the tacit pressure placed upon us all.

“We want to change the conversation about what a woman’s body should be like after birth,” says Prichard, who has created Body Confident Mums along with two fellow researchers and mums.

“We want people to feel confident looking after themselves and it's really hard to look after yourself if you don't appreciate yourself for who you are and what you can do. If we can promote that then we can move towards promoting healthier behaviours and longer term health both physically and mentally for mothers.”