‘There are quite a few older women’: Australia’s growing pole-dancing community

There are flat tummies, soft tummies, big boobs, no boobs, wrinkles, dimples, taught and tanned skin, but mostly what there is, is flesh. A lot of it. Under pink fluorescent lights, some huddle together on a platform, cheering and whooping. In front of them, six of their counterparts climb, twirl and roll around brass poles, their eyebrows furrowed in concentration and foreheads glistening with exertion.

These women are part of a burgeoning pole-dancing community in Australia. With studios and competitions springing up across the country, more and more women are participating in pole-dancing in various forms, developing fitness and fortitude from the experience. 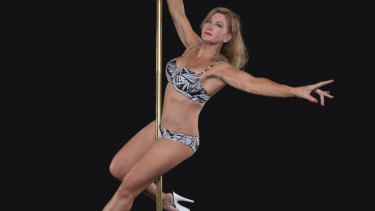 Debra Lynch started pole dancing to improve her fitness. Eight years later, her dancing classmates are some of her best friends.

Look, I'm an old chick in the pole world. I worked for the government and was doing sedentary office work for years and years. I was heading for major surgery for carpal tunnel syndrome. I did go to the gym, but I never really enjoyed the gym. Gyms are clubs, but they're isolating clubs. Then I took a redundancy, left the government and took up a fitness fanatic friend's offer to do a beginners trial at a pole-dancing studio.

We were pretty hopeless. I couldn't even put my knee around the pole. But I fell in love with it. It challenges you in the fitness sense but also it challenges you because you're learning choreography, so it keeps your mind active. If you were just doing pole-dancing without the choreography, I don't know if I would have been so attracted to it. It's the whole package: fitness, the group activity, the dancing, the fun, plus the dressing up. It's the combination of those things that makes it just fantastic.

I have made the most amazing group of friends doing pole-dancing classes. I equate it to a boys' football club: you get together, you enjoy the same things, you support each other. Even though it's the teacher's job to give you the training, other students support you when you're trying to do a new move.

After about six months of pole-dancing, my carpal tunnel syndrome completely went away. Before I started pole-dancing, I would wake up in the night with my arms on fire.

A group of us from my intermediate SLAP [strip tease/lap dance] class get together regularly. Six of them came to my wedding last year. One of the girls turned 60 two weeks ago, and we all went to her birthday party. We're now friends. It's part of your life. You have them involved in things you do outside of pole as well.

There are quite a few older women who do it. We don't do competitions, because there are no competitions for over 50s. Maybe there should be! But, really, I just do it for fun.

When Tanya Watts tried pole-dancing 12 years ago, she thought it would be a one-time thing. As Luna, she teaches full-time at Sydney Pole and competes in Australia and internationally.

I used to be in banking, running data analytics and all that kind of thing. I was teaching pole-dancing on the side, performing on the side and thought that was all it was ever going to be. Then it all exploded. Now, between my competition and teaching schedules, I don't get a lot of sleep. 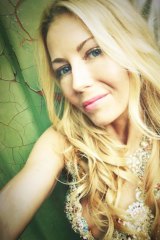 When I started, 12 years ago, I didn't have an athletic background. I was that person in school who would have a sick note to get out of cross country. Bobbi's Pole Studio had set up one pole in a strip club and were teaching people. I booked to go, but it took me about six months to do it. When I eventually rocked up, I thought I would do it once and never do it again. But it was like flying. Ever since that first lesson, it became this addiction.

Back then, the whole pole fitness thing hadn't come to Australia. It was: "You dance sexy. You wear heels. It's all about the body roll and the teeny tiny outfits." Which is great and it's incredibly empowering, but now you can make it anything you want it to be. You can be the gymnast on the pole, the acrobat, the contortionist, the ballerina, the contemporary dancer or the stripper. And you can switch in and out of roles anytime you like.

What it's done for me is changed what I think about myself, more than anything else. It changed my perception of what I am capable of doing – and, therefore, what's possible in the rest of life, too. I used to be an incredibly shy person. Even in my work life, I was an introvert. But now it's flipped. I know that I can back myself.

Most competitions will announce their finalist list five or six weeks before the competition itself. So you have to be training beforehand. If you wait until the finals list is published, you are not going to pull together a show that's worthy of being on stage. Australian competition season runs from late April all the way until November. If you're competing internationally, it's pretty much all year round.

In the lead up to Miss Pole NSW, I was training every day in addition to teaching. On average, I teach three to four hours a day. Then typically after I finish teaching, I'll train for two or three hours, because my body is already warm. When you teach, it's a huge adrenaline rush. Even if it's late at night, you actually can't stop.

You don't make money from competing. A lot of time you won't even get a sash or trophy; you just get the words, "You have done … whatever." For my Miss Pole NSW routine, the prop behind me cost $2500. The costume and make-up was another $1000. You do it because you want to do well; for reasons other than money. I love it, but – literally – it's your life.

"IT GAVE ME FREEDOM"

Jennifer Derbyshire pole-danced in clubs around Europe and the US for four years before settling back in Sydney and beginning a career teaching others to pole-dance for fun.

The biggest misconception about doing pole-dancing in strip clubs is that people think that you're forced to be there. That's just absolutely not true. I have never come across anyone who has been there because they felt they had to be. Everyone I worked with – myself included – was there because we enjoyed it. You do create your own little group of friends in clubs.

What I loved about working in clubs was the flexibility, the freedom of it. You're not chained to the desk. I was in my early 20s and it gave me the money to travel. It gave me freedom. If I wanted to go home, I'd go home. If I didn't want to come in, I wouldn't come in. You can pick and choose which clients in the club you talk to. I didn't feel like I was working for anyone. It was completely up to me what I did, and when I did it. 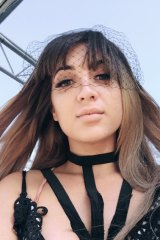 When you do pole in a pole studio, you do it for an hour and then you go home. When you do it in a club, you are rotating on and off the pole all night. Generally shifts will last from 9pm or 10pm until about anywhere between 2am and 5am. You have to get up and dance for 15 minutes, go out and walk around the club and then your name will get called and you have to get up again. So, depending on how full the club is, you're literally on the stage every 15 or 30 minutes. If it's a quiet night and there are only a few girls working, you'll spend more than 50 per cent of the night on stage dancing. It's really tiring, but you don't realise it at the time, I guess, because it's a very social line of work as well.

In the clubs, pole-dancing wasn't so much about tricks as making sure all eyes are on you. You want to create a presence and draw people to you, so that then gives you more options when you're walking around the club looking for clients for lap dances, which is where you earn most of your money.

Sometimes when it was quiet, we'd have more of a go of working on tricks. Girls who had been there longer might show newer girls a few tricks. But, in terms of tricks, I didn't get very advanced doing club work. It definitely made my freestyle game really good. It wasn't until I started doing pole in a studio with a teacher that I realised that my technique, because it was self-taught, was terrible.

This article appears in Sunday Life magazine within the Sun-Herald and the Sunday Age on sale May 19.