Vaping does not help a person quit smoking – and users are more likely to stop using e-cigarettes than they are traditional tobacco, a study suggests.

Researchers from George Washington University in Washington DC gathered data from 545 people who both smoked and vaped regularly. They found that after five years, more than half had ditched e-cigarettes, while only a third kicked smoking.

Vapes are often marketed for their ability to help tobacco users drop the bad habit – serving as a ‘safer’ transition away from cigarette smoking. This study is a setback for that belief, though, as it finds that people who use both devices will often continue smoking long-term.

The devices have rocketed to popularity over the past decade, especially among teens. Juul labs, a leading manufacturer of the devices agreed to pay $1.2billion to settle 5,000 lawsuits alleging it marketed its products towards children last week, a major setback for the industry. 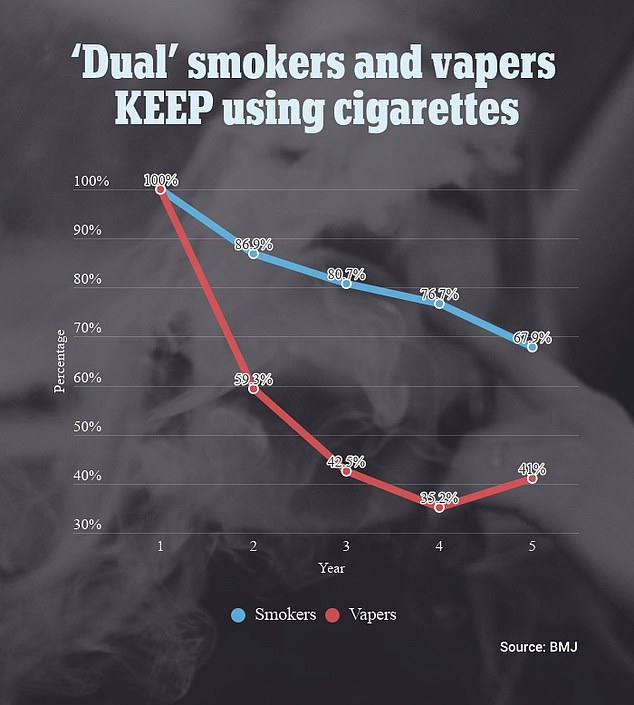 Dual users of both vapes and e-cigarettes were more likely to quit vaping than they were the cigarettes themselves. Over the five years, more than half of vapers had quit 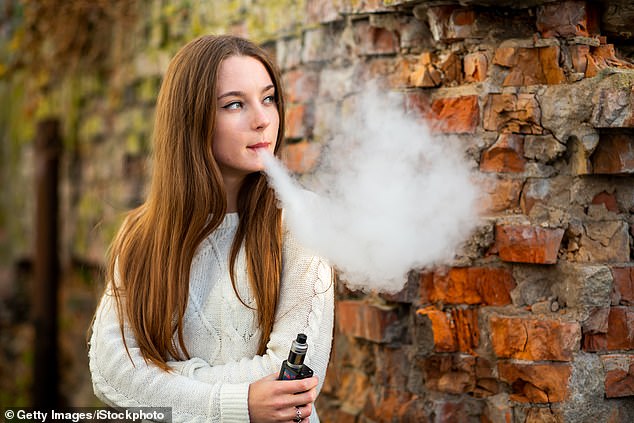 Researchers, who published their findings today in BMJ, gathered data from the National Institutes of Health’s annual Population Assessment of Tobacco and Health survey.

The study uses a pool of 49,000 Americans who are contacted each year to discuss their use of tobacco products like cigarettes and vapes and to gauge their overall health.

As part of the survey, participants answer whether the are frequent users of all kinds of tobacco and nicotine devices.

In the 2013-14 edition of the survey, 545 respondents reported regular use of both cigarettes and vapes.

Each was then followed over the next four years, using their future survey responses to track whether they had continued these unhealthy habits.

The number of dual users that continued to vape would significantly fall within the first year.

During the second edition of the survey, the number of dual users who were still smoking fell to 322 – or 59.3 percent of the total from the year before.

By year three, the total was down to 222 – a 31 percent year-over-year decline and down nearly 60 percent from the first survey.

A floor was reached in year four, where only 191 of the original group of 545 were still vaping. Researchers recorded a rebound in the fifth year, with 217 original dual users vaping that year – or 41 percent of the initial sample.

These figures showed a massive drop when compared to the number of dual users who stopped using combustible cigarettes.

The Food and Drug Administration (FDA) has axed the sale of 15 child-friendly e-cigarette devices shaped like toys and featuring popular cartoon characters.

Five companies are accused of using popular imagery from TV shows such as The Simpsons, Squid Game, Rick and Morty, and Family Guy to market the vapes to children and teens.

Other devices highlighted by the FDA are shaped like Nintendo Gameboys, popsicles, bananas or feature animals from children’s cartoons like BabyBus.

The five manufacturers warned last month — Wizvapor, R and M Vapes, Shenzen Quawins, Ruthless Vapor, and Moti Global — are based in China, Canada and Hong Kong. They must stop selling the products in the US immediately.

Dr Brian King, director of the FDA’s Center for Tobacco Products, said ‘the designs of these products are an utterly flagrant attempt to target kids.’

After the first year, the number of dual users who were still smoking fell to 86.9 percent, and dropped to 80.7 percent a year later.

Just under a quarter had stopped using cigarettes after the third year. Two-thirds, or 67.9 percent, were still smoking in the final year of the study.

Over the course of the study period, nearly twice as many dual users had dropped vaping (59 percent had stopped the habit) than stopped using cigarettes (32.1 percent).

The study refutes claims made by the vape industry that their products are valuable tools to help a person quit smoking – and not devices getting people who otherwise would not use nicotine addicted.

Firms that sell these devices have drawn regulatory ire in recent years, especially those that allegedly market their devices to children using fruity and minty flavors.

The Centers for Disease Control and Prevention estimated in October that nearly 2.6million US teens currently use e-cigarettes.

As a result, the Food and Drug Administration has clamped down of flavored e-cigarette manufacturers – forcing them to receive expressed approval from the agency to operate in the US.

Juul’s application to sell its products in the US was rejected by the FDA. It temporarily remains on shelves as the company appeals the decision.

The firm, once one of the giants of tobacco products in America, now faces ruin – having paid $1.7billion in lawsuit settlements in the past few months and potentially losing their ability to operate in the US market.