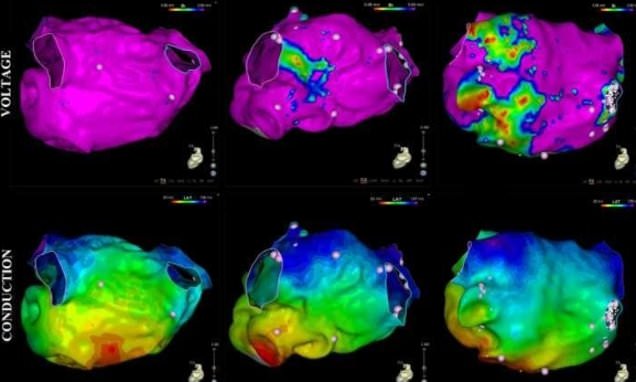 What drinking TWO glasses of wine a day does to your heart: Shocking scans reveal how regular alcohol consumption can lead to an irregular heartbeat

Disturbing heart scans have revealed the damage regular drinking can inflict on the organ.

Past studies of more than 800,000 people have discovered alcohol increases a person’s risk of developing an irregular heartbeat.

And images now show two glasses of wine a day is enough for the heart to become scarred and have difficulty processing the electrical signals which control its rhythm.

Experts say the discovery means the amount of booze someone drinks is an ‘important risk factor’ for atrial fibrillation – an irregular heartbeat.

The condition puts people at a higher risk of having a stroke or heart failure, meaning drinking habits could signpost future heart problems. 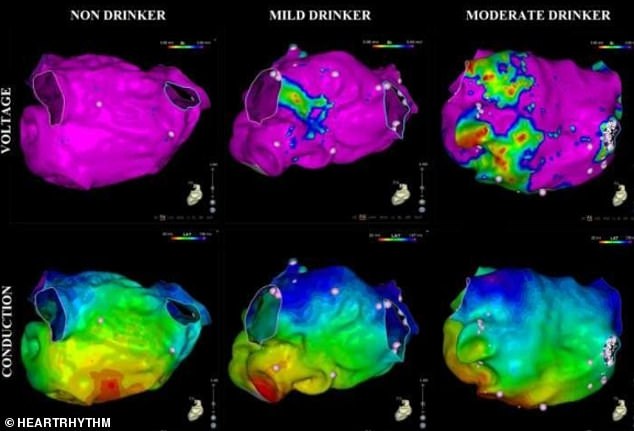 The scans on the top row show the heart of a non-drinker in all pink, signalling healthy tissue, whereas that of a moderate drinker has patches of green and red, which show areas of damaged tissue through which vital electrical signals could struggle to flow, affecting the organ’s function

The scans, produced by scientists at Alfred Hospital in Melbourne, Australia, show how well electricity travels through the hearts of drinkers.

Electrical signals are vital to the function of the heart because, controlled by nodes linked to the nervous system, they tell it when to contract and relax.

A healthy heart needs the signals to flow freely and regularly through undamaged tissue, whereas hearts which are scarred are less able to conduct the signal and therefore more likely to be out of time.

Whereas the heart of what the scientists called a ‘moderate drinker’ has large patches of scarring shown in green.

Their idea of moderate drinkers in the study were the people who had between eight and 21 alcoholic drinks per week – 14 on average.

However, 14 drinks per week is far more than the NHS’s recommended weekly limit of 14 units, which equates to nine glasses of wine or seven pints of beer.

Even the ‘mild’ drinker – someone who has up to eight drinks in a week – has patches of tissue damage, though the scientists said it would not be a concerning amount.

‘These electrical and structural changes may explain the propensity to atrial fibrillation in regular drinkers.

‘It is an important reminder for doctors who are caring for patients with atrial fibrillation to ask about alcohol consumption and provide appropriate counselling in those who over-indulge.’

Previous research has linked drinking to irregular heartbeats but there has been a lack of studies into how alcohol affects electrical currents, the researchers said.

WHAT IS ATRIAL FIBRILLATION?

Atrial fibrillation is a heart condition that causes an irregular and often abnormally fast heart rate.

A normal heart rate should be regular and between 60 and 100 beats a minute when you’re resting.

You can measure your heart rate by feeling the pulse in your neck or wrist.

In atrial fibrillation, the heart rate is irregular and can sometimes be very fast. In some cases, it can be considerably higher than 100 beats a minute.

This can cause problems including dizziness, shortness of breath and tiredness.

Atrial fibrillation is the most common heart rhythm disturbance, affecting around 1 million people in the UK.

It can affect adults of any age, but it’s more common in older people. It affects about 7 in 100 people aged over 65.

You may be aware of noticeable heart palpitations, where your heart feels like it’s pounding, fluttering or beating irregularly, often for a few seconds or, in some cases, a few minutes.

You should make an appointment to see your GP if: