A woman has revealed her PMS symptoms are so extreme that she has considered having a hysterectomy at the age of 22.

Charlotte Atkinson, of Greenwich, south east London, has such severe mood swings she stops working and hides in her bedroom every time she has a period.

The film producer suffers with premenstrual dysphoric disorder (PMDD) a severe form of premenstrual syndrome (PMS) which causes anxiety, depression and, at its worst, psychosis or suicidal thoughts.

It’s only become a recognised psychological condition within the past decade, and doctors believe it could be caused by genetics.

Therefore, Miss Atkinson, who must put her life and relationships on hold every month, said she would hate to pass the condition on if she has a daughter. 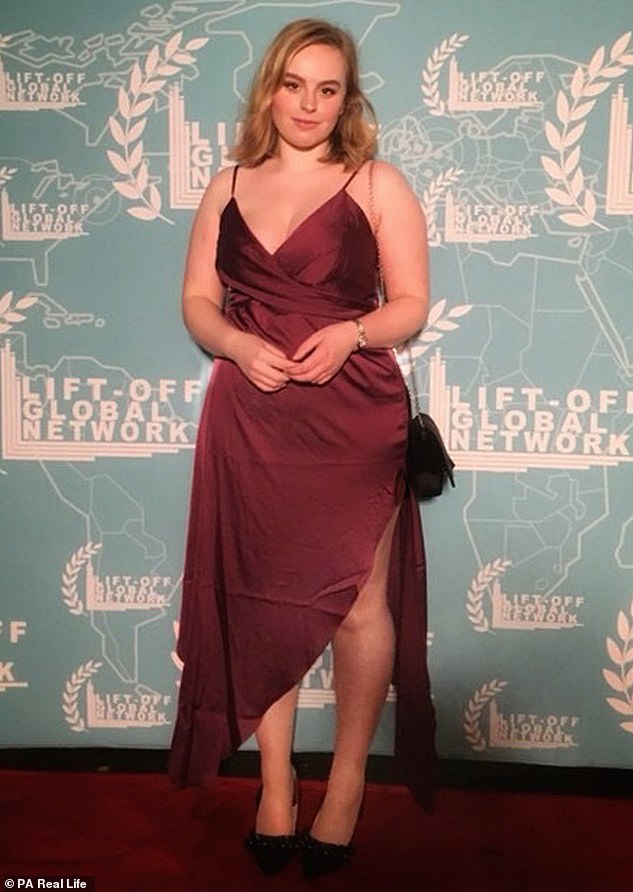 Charlotte Atkinson, of Greenwich, doesn’t leave her bedroom for five days every period because of her severe form of PMS. Pictured, on a bad day having to attend an event 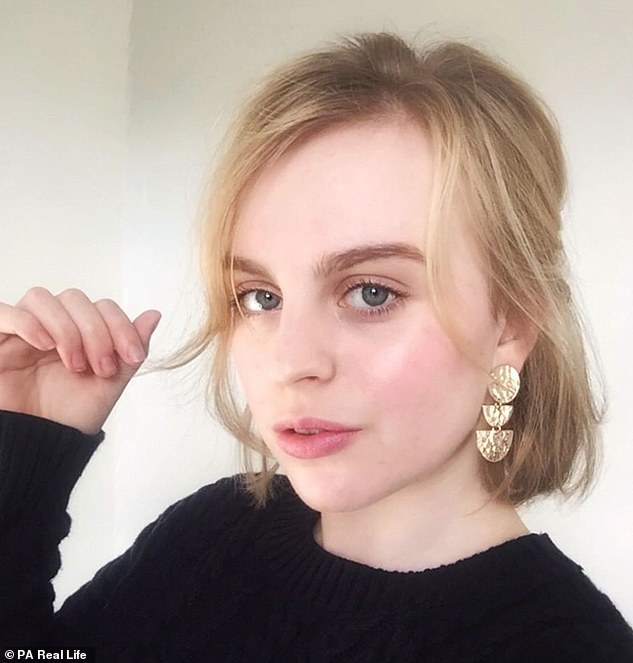 The film producer suffers with premenstrual dysphoric disorder (PMDD), which causes anxiety, depression and, at its worst, psychosis or suicidal thoughts

Miss Atkinson said of her PMDD: ‘You never know what you are going to get, but I know it’s best to keep to myself when I am suffering those symptoms so I will block those four or five days out in my diary, tell everyone I can’t do anything then and retreat to my room.

‘I know these feelings will pass after a few days, but they are so difficult to deal with that even though I want children one day, I have thought about having a hysterectomy as a last resort.’

Although the exact cause of the condition is unclear, research has shown PMDD may be linked to stressful and traumatic past events, according to charities.

Miss Atkinson believes her symptoms were first triggered by the pressure of exams.

By her late teens, this could happen three times in a month, leading to her mother persuading her to see a doctor who tested for her for a thyroid problem.

WHAT IS PMDD COMPARED TO PMS?

While most women with PMS find their symptoms uncomfortable, a small percentage have symptoms severe enough to stop them living their normal lives.

This is the result of a more intense type of PMS known as premenstrual dysphoric disorder (PMDD).

The symptoms of PMDD are similar to those of PMS, but are more exaggerated and often have more psychological symptoms than physical ones.

As depression is a common symptom of PMDD, it’s possible that a woman with PMDD may have thoughts about suicide.

PMDD can be particularly difficult to deal with as it can have a negative effect on your daily life and relationships.

Miss Atkinson, who grew-up on the Herefordshire border with South Wales, said: ‘It was after all my exams and I told the doctor my periods had gone mental.

‘I’d gone from having very light periods lasting just four or five days, to losing so much blood I would have to use toilet paper to boost the sanitary pad I was wearing when I was at school.’

The fatigue, crankiness and mood swings began around the age of 19, when Miss Atkinson read about PMDD and felt it could have been written about her.

Miss Atkinson claims she was the first to realise she had PNDD after doing research.

She said: ‘It was such a relief to read the symptoms of PMDD and think I had them all.

‘I thought, “I’ve got to deal with this now,” but it was still better than not knowing what was wrong with me.’

Many women suffer with PMS symptoms, including headaches, stomach pains, diarrhoea, breast tenderness and depression in the run up to their period.

The psychological symptoms of PMDD, of which the prevalence is unclear, are considered to be caused by a genetic sensitivity to the normal hormonal fluctuations leading up to the menstrual bleed.

The hormone changes may cause a deficiency in serotonin, a substance found naturally in the brain that affects mood.

The symptoms can include extreme anxiety, psychosis, depression and wanting to harm yourself and others.

When Miss Atkinson, who is single, realised she had it, she returned to her doctor who had not heard of the condition. 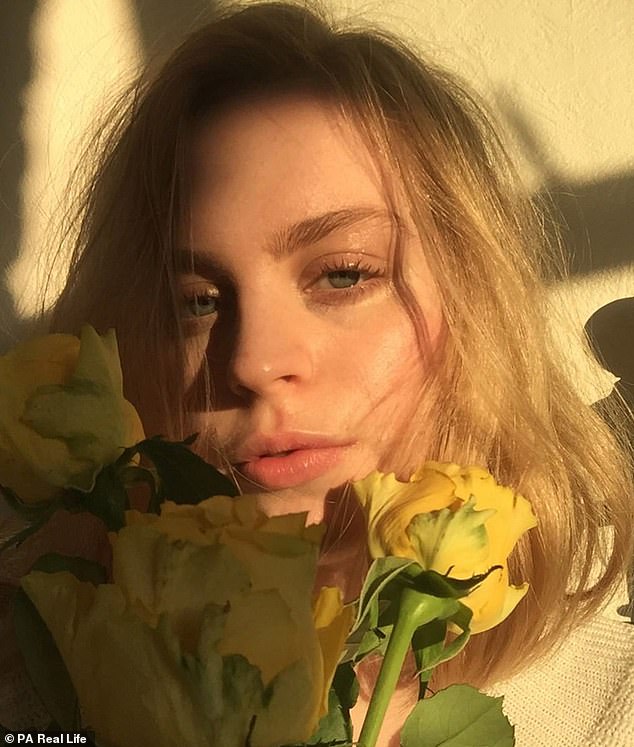 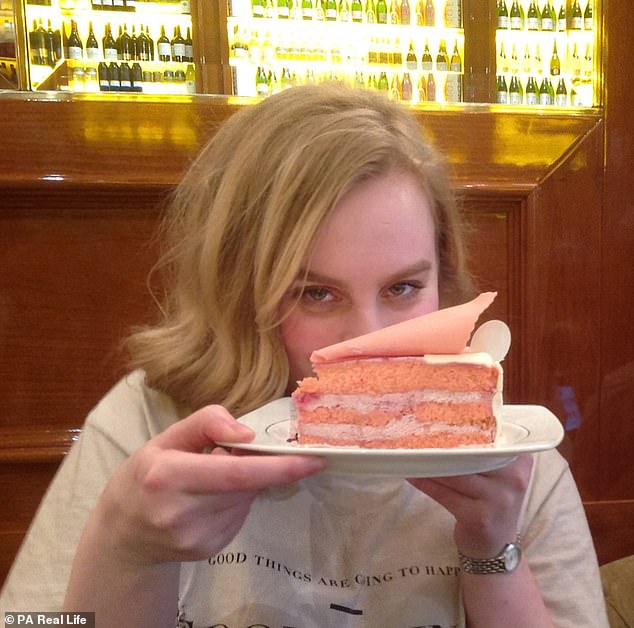 Miss Atkinson, pictured on a bad PMDD day on her birthday, said she worries she will ruin special occasions or events because she can’t help how her PMDD will make her angry 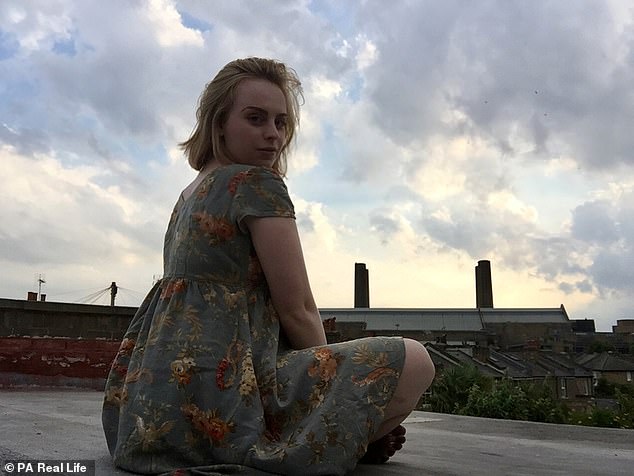 In order to get through, when the symptoms start and she can no longer deal with day-to-day life, Miss Atkinson closes her bedroom door, turns off her phone and locks herself away in self-imposed exile until she has struggled through it

She admits: ‘The symptoms, which for me can include feeling suicidal for two or three days, are unrelenting.’

When her symptoms start and she can no longer deal with day-to-day life, Miss Atkinson closes her bedroom door, turns off her phone and locks herself away in self-imposed exile until she has struggled through it.

Despite finding this the best way to deal with her symptoms, Miss Atkinson would not recommend this technique to other sufferers.

She said: ‘I know I’m going to be a nightmare to live with because of these symptoms so I tend to keep people, including friends, at arm’s length.

‘Friends do try and be supportive, but it is a roller coaster for them, too, because it doesn’t just happen and then it’s over.

‘It’s going to happen again the following month and again the one after that.

‘I’ve just learned that it’s best to keep to myself when I am in the bad place and I keep trying to remind myself those feelings will pass.’

While no one knows the exact cause of PMDD, Miss Atkinson does fear that she could one day pass it on to a daughter if it turns out to be genetic. 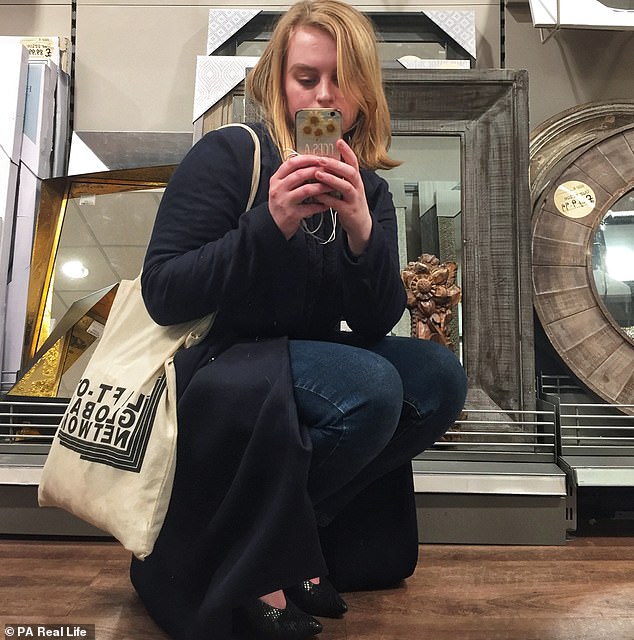 Miss Atkinson said: ‘Sometimes when I am feeling either hopeless or numb I take myself off to Ikea or HomeSense. I don’t know why this works but I think you can just sort of lose yourself in those massive places’. Pictured having a bad PMDD day in a homeware store 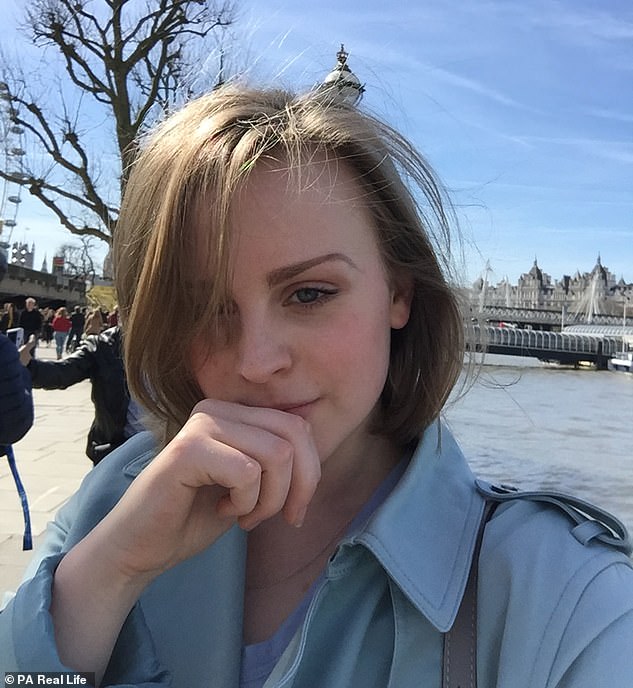 Although the exact cause of the condition is unclear, Miss Atkinson believes her symptoms were first triggered by the pressure of GCSE exams

She said: ‘Because I’ve been coping with this condition for a few years, I know what to expect for those few days when it’s at its worst.

‘I’m also worried that if it is a genetic condition, then if I had a daughter, I might pass it on to her and then I would feel really guilty because I know just how bad those days can be.’

As well as retreating from the world, Miss Atkinson has found some unusual ways of calming her excessive move swings.

She said: ‘Sometimes when I am feeling either hopeless or numb I take myself off to Ikea or HomeSense.

‘I don’t know why this works but I think you can just sort of lose yourself in those massive places.

‘As much as I try to keep to myself, it’s not always possible, especially for things with a fixed date like your birthday.

‘If those dates coincide with me having PMDD then I tend to get even more worked up, thinking I’m going to spoil the day by being quiet or angry or impatient, which just results in more depression and more anxiety.’ 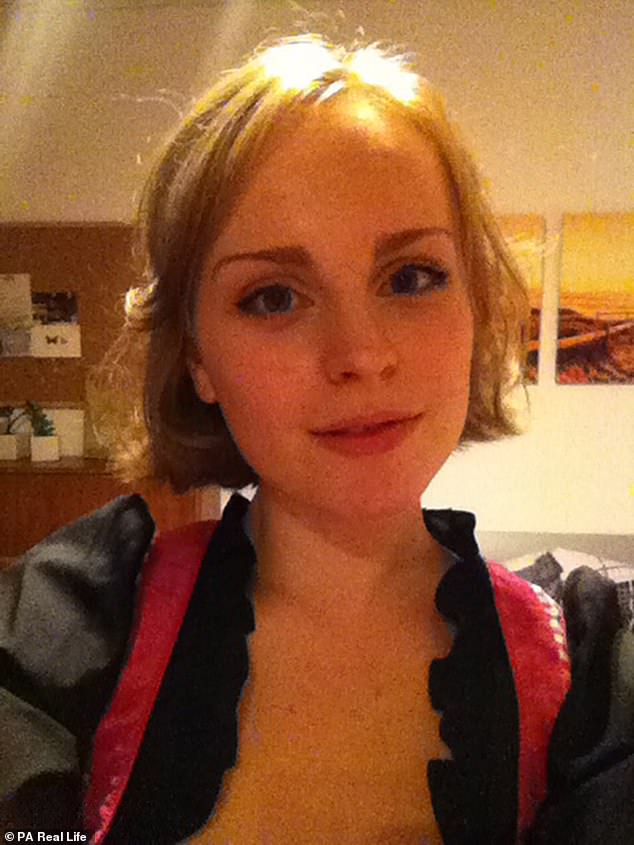 When Miss Atkinson realised she had PMDD by reading articles online, she returned to the doctor who, back then, had not heard of the condition. It was later confirmed

She said: ‘I am lucky because I work as a freelance film producer, so I just work out when those days will be, block them out of diary and stay away from people.’

PMDD is commonly defined as an endocrine disorder, meaning that it is a hormone-related disorder. But because it has recently been listed as a mental health problem.

If you’re experiencing suicidal feelings you can call the Samaritans for free on 116 123 to talk.