You’re not imagining it: Hanger is real and it starts in the brain

Bob Marley sang that “a hungry man is an angry man” back in the 1970s, and now scientists are beginning to agree with him. New research has joined a growing body of evidence that “hanger” – anger brought on by being hungry – is a real thing.

Experts say it comes back to neurons in our brains that are activated by hunger, and when that happens, people experience negative emotions.

Researchers in the journal Plos One got a lot of attention recently when they concluded that “everyday levels of hunger are associated with negative emotionality”. They gave 64 participants an app to record their food intake and how they were feeling, and prompted the volunteers to record their details five times a day for 21 days. 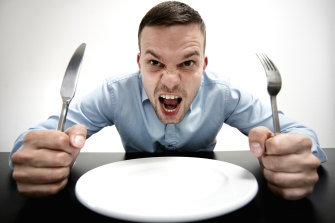 Science has spoken: “hangry” is a thing.Credit:iStock

They found a correlation between hunger levels and anger: “Greater levels of self-reported hunger were associated with greater feelings of anger and irritability, and with lower pleasure,” the report said. In other words, “hangry” is a thing.

But even the most rudimentary of statisticians know correlation does not equal causation – particularly when the number of participants is so small. So how can we trust the study?

Professor Brad Bushman, a sociologist who explored connections between hunger and violence and presented a TED talk about research into being hangry, says while the number of people surveyed was small and not representative of a general population, the fact they were surveyed for 21 days indicates a trustworthy trend.

“The more you measure something the more reliable it is,” he told The Sydney Morning Herald and The Age. “The sample size is small, but the length of days is good.”

His own research into the concept has shown the human brain relies on a disproportionate percentage of calories to function.

“Although it’s only about two per cent of our body weight, [the brain] uses 20-30 per cent of the calories we consume,” he said in a 2014 TED talk. His research found those with low levels of glucose were more likely to be angry with their spouses.

But what is going on in our brains to cause this?

Dr Zhi Yi Ong, a senior lecturer in biomedical science at UNSW, says it comes down to those little things called neurons.

“There’s a population of neurons in the brain that are hunger neurons, activated by hunger,” she said. “When they are activated, that increases our food intake, and causes … a negative emotional state.”

The neurons tell us when our body needs food. Without satisfying that need, negative feelings, such as anger and irritation, continue.

Bushman agreed. “Being deprived of fuel for your brain causes you to be more aggressive,” he said.

Maybe it’s worth having lunch after all.