Hookah smokers are inhaling toxic chemicals that may harm the heart 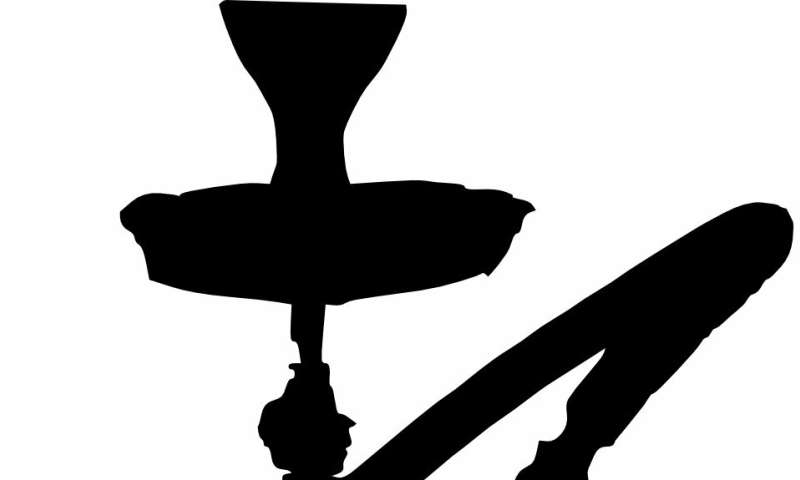 Smoking tobacco in waterpipes, more commonly known as hookahs, results in inhaling toxic chemicals, often at levels exceeding cigarette smoke, that may harm the heart and blood vessels, according to a new scientific statement published in the American Heart Association’s journal Circulation.

Waterpipes go by many names—hookah, narghile, argileh, shisha and goza—and usually consist of a head or bowl that holds tobacco, a body, water base and hose that ends with a mouthpiece. Burning charcoal is placed on top of the tobacco-filled bowl. Hookah tobacco is usually a combination of dried fruit, flavored tobacco and substances to keep the tobacco moist.

During a hookah smoking session that typically last for 30 or more minutes, users inhale many liters of smoke filled with large quantities of particulate matter at higher concentrations than cigarettes.

In addition to carbon monoxide, hookah smoke contains other potentially harmful chemicals that can affect the cardiovascular system, including nicotine, air pollutants, particulate matter, volatile organic chemicals, polycyclic aromatic hydrocarbons, acrolein, lead, cadmium and arsenic. Most of these toxins are higher in hookah than cigarette smoke.

“Hookah smoke contains harmful substances and the American Heart Association strongly recommends avoiding the use of tobacco in any form,” said Aruni Bhatnagar, Ph.D., chair of the writing group for the statement and professor of medicine and director of the University of Louisville Diabetes and Obesity Center in Kentucky.

“Many young people mistakenly believe that smoking tobacco from a hookah is less harmful than cigarette smoking because the tobacco if filtered through water, but there is no scientific evidence that supports that claim. However, there is evidence to suggest that hookah smoking is addictive and can lead to the use of other tobacco products such as cigarettes,” said Bhatnagar.

The spread of hookah smoking, especially among young people, is promoted by several factors, including sweetened and flavored hookah tobacco, social media that promotes this method of tobacco use and misperceptions regarding its addictive potential and adverse health effects.

Unlike cigarette tobacco, hookah tobacco, often colorfully packaged, can be sold in candy and fruit flavors, which appeal to younger audiences. The flavors and sweeteners added to the tobacco mask the harshness of smoke, making it easier to start and continue smoking hookahs.

In addition, because many people smoke hookah in lounges and cafes it is perceived to be a social activity and less habit-forming. More importantly, most of the tobacco marketed to hookah users does not carry a health warning, leading to the misperception that it is not harmful.

In the United States, recent surveys have estimated hookah usage that range from 4. 8 percent among high school students to 13.6 percent of young adults (18-24 years old). People 18-24 years of age also accounted for 55 percent of hookah smokers nationwide. In addition, those who use a hookah are more likely to start smoking cigarettes than those who have never smoked a hookah.

Globally, hookah usage is spreading among younger people. Data from a survey of seven Middle Eastern countries showed that the rates of hookah smoking ranged from 9 percent to 15 percent, which was higher than rates of cigarette smoking in some countries. A study in the United Kingdom found that hookah use was more than twice as common as cigarette smoking.

Currently, there is a persistent misperception among hookah users that this method of tobacco use is harmless. In contrast, many youths are more aware of the risks associated with cigarette smoking and avoid that method of tobacco use because of those risks. Research is needed to effectively communicate the negative health impact of hookah smoking.