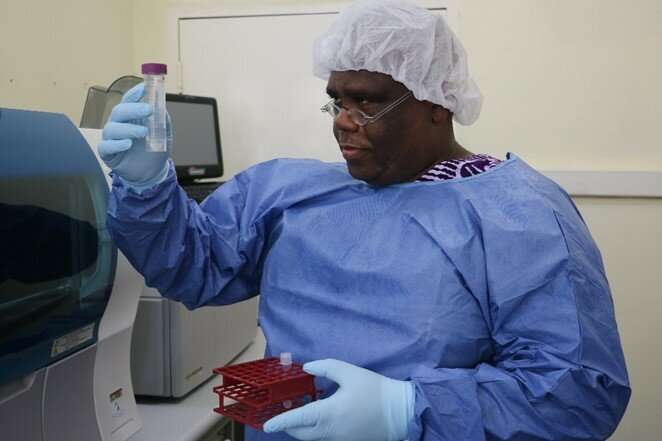 Survivors of Ebola virus disease (EVD) in Liberia had a higher prevalence of certain health issues—including uveitis (eye redness and pain), abdominal, chest, neurologic, and musculoskeletal abnormalities upon physical exam—when compared to a control group of household and community members who did not have a history of EVD, according to findings from an ongoing study published in the New England Journal of Medicine. However, even participants in the control group experienced a relatively high burden of health issues overall.

“The PREVAIL study has yielded novel insight regarding the health issues facing some survivors of Ebola virus disease in Liberia and their close contacts,” said NIAID Director Anthony S. Fauci, M.D. “We thank our partners in the Liberian government for their collaboration in the successful implementation of this study, and we thank the study volunteers for their selfless participation in this important research.”

PREVAIL initiated the study of Ebola survivors (called PREVAIL 3) in Liberia to determine the long-term consequences of EVD by comparing health outcomes in survivors (966 people) and a control group of uninfected household and community contacts (2,350 people). Participants in the study completed a baseline clinic visit in 2015 and are being reevaluated every six months for five years. Study sites include the John F. Kennedy Medical Center in Monrovia, the C.H. Rennie Hospital in Kakata, and Duport Road Clinic in Paynesville.

Evaluations by healthcare professionals showed significantly more survivors than controls had abnormal findings on abdominal (10.4 percent vs. 6.4 percent), chest (4.2 percent vs. 2 percent), and neurologic (4.5 percent vs. 1.5 percent) examinations. With regards to abnormal musculoskeletal findings on examination, only muscle tenderness was observed significantly more frequently in survivors than controls (4.5 percent vs. 0.9 percent, respectively). Other musculoskeletal findings, such as joint swelling and decreased range of motion were not observed at a significantly higher frequency in survivors compared with controls. The prevalence of health issues declined in both groups over the one-year follow-up period.

“The results from this study have a far-reaching public health and clinical care importance for Liberia, Africa, and world,” said Dr. Fallah. “The study further demonstrates the commitment of our survivors to this collaborative research between Liberia and the U.S.”

A subset of 564 survivors and 635 close contacts received eye exams by ophthalmologists at the John F. Kennedy Medical Center. At the baseline visit, 149 survivors (26.4 percent) had evidence of uveitis in at least one eye as compared with 77 participants in the control group (12.1 percent). Uveitis refers to a group of inflammatory eye diseases that can cause pain, redness, swelling, tissue damage, light sensitivity, and vision loss. Unlike other symptoms, the prevalence of uveitis increased in both groups at the one-year follow-up visit, with a significantly higher incidence of new cases among survivors compared to controls.

“Ebola-associated uveitis was common among our patients. This study highlights how crucial ophthalmic care is to the care of Ebola survivors,” said Rachel J. Bishop, M.D., M.P.H., chief of Consult Services at NEI and co-lead on the eye sub-study.

“Our findings underscore the importance of including population controls in a region where there are other causes of uveitis and cataracts,” said Dr. Sneller. “Systematic evaluations of participants and inclusion of a control group of people exposed to the same environment are critical to defining the true clinical sequelae of survivors of Ebola virus disease.”

Previous studies have indicated that fragments of Ebola virus RNA can persist in the semen of male survivors. The detection of Ebola virus genetic material in semen could indicate the presence of viable and potentially transmissible virus; however, it does not necessarily mean infectious virus exists. Reports describing cases of survivors transmitting Ebola virus to a sexual partner are rare, and more research is needed to understand the risks. As part of PREVAIL 3, 267 male survivor participants provided 2,416 semen samples, with 252 men providing more than one sample. Investigators detected viral RNA in one or more samples in 81 men (30 percent). The longest recorded time from EVD to detection of viral RNA in a sample was 40 months.