Triangular relationship in the epileptic brain 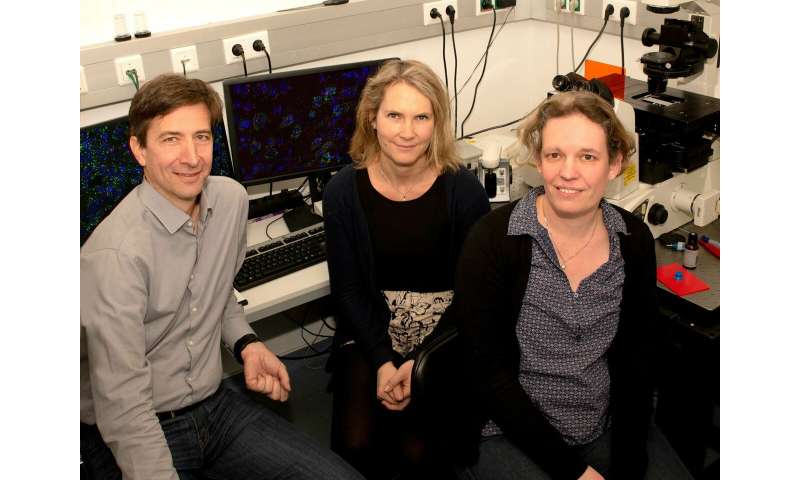 When an epileptic seizure occurs in the brain, the nerve cells lose their usual pattern and fire in a very fast rhythm. The cause is a complex interplay of various factors. Scientists at the University of Bonn have now discovered the important role of one of the participants: a2d4 (alpha2delta4). It is a central player between the nerve cells, a puzzle piece that plays a decisive role in the development of epilepsies and is a possible starting point for therapies. The results now appear in the Journal of Neuroscience.

During an epileptic seizure, the nerve cells fire simultaneously in a very fast rhythm—like a thunderstorm in the brain. This results in seizures. Due to changes in the brain, such a short seizure can develop into chronic epilepsy in the long term. “The search for new therapies is above all about preventing the gradual development of such severe types of seizures,” says Prof. Dr. Albert J. Becker from the Institute of Neuropathology at the University Hospital Bonn (UKB).

When an epileptic seizure occurs, genes and their regulation are also involved. Genes are blueprints of DNA. Transcripts are made of genes during transcription; these then reach different locations in the nerve cells and influence their function. As the scientists at the University of Bonn were able to demonstrate several years ago, the transcription factor Early growth response 1 (Egr1) upregulates the calcium channels in the nerve cells. Calcium can then increasingly flow into the pores of the nerve cell channels. This causes them to start firing in unison—an epileptic seizure begins.

“However, as we have now discovered, the process is much more complex,” says Dr. Karen M. J. van Loo, junior research group leader at the UKB. “There are other factors involved.” Like in a grid search, the scientist and her UKB colleagues Prof. Dr. Dirk Dietrich from Neurosurgery and Prof. Dr. Sandra Blaess from the Institute of Reconstructive Neurobiology used bioinformatic methods to search for additional epilepsy genes involved in the seizures. The researchers then observed the interaction of the epileptic factors in human tissue obtained during surgical removal of epileptic foci from patients’ brains and in mice.

The main focus is on the triangular relationship of the already known transcription factor Egr1 and the specialized calcium channel pores Cav3.2 and a2d4 (alpha2delta4). Van Loo says, “The role of a2d4 has been underestimated so far.” .

By upregulating the transcription factor in mice, the scientists ensured that their nerve cells produced considerably more a2d4 in the brain. “The more a2d4 was present, the greater the tendency to have seizures,” says Prof. Dr. Susanne Schoch-McGovern from the Institute of Neuropathology at the University Hospital Bonn. This connection was also confirmed by investigations using human brain tissue.

The nerve cells in the brain normally protect themselves from an epileptic seizure with a stable rhythm. “This can be compared to the anti-lock braking system in a car, which also protects against overreaction,” says Becker. Various sensors measure whether a wheel is blocked and then use this information to perform an optimized adjustment of the vehicle’s braking force. If a2d4 is upregulated, the anti-lock braking system in the nerve cell network figuratively fails and the accelerator pedal is fully depressed: The usual nerve cell rhythm gets out of sync and accelerates—an epileptic seizure is imminent.

“It is not enough to look at individual molecules in the brain to understand the onset of an epileptic seizure,” says Karen van Loo. “Rather, the whole network must be considered.”