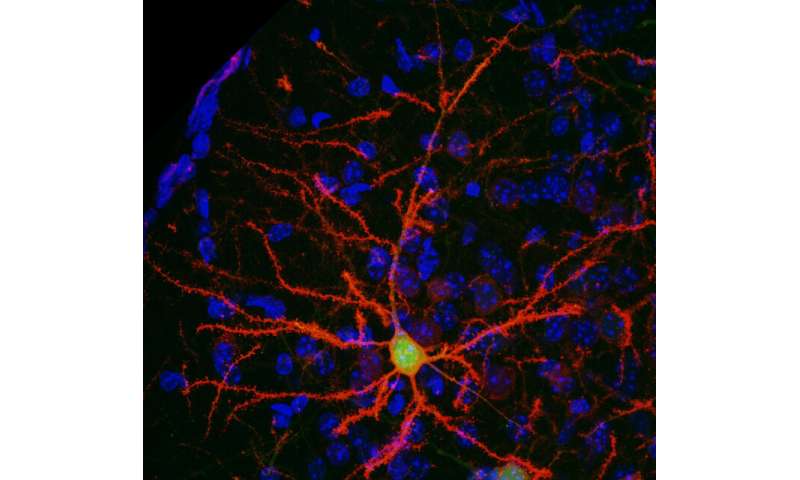 An anti-smoking drug now has a new job—as a chemical switch to turn select neurons on or off.

The drug latches on to designer proteins, called ion channels, that control whether or not a neuron will send a message. By putting those proteins only in certain groups of neurons, scientists can target modulation of specific cells while leaving other neurons unaffected.

The system, developed by Scott Sternson, a group leader at the Howard Hughes Medical Institute’s Janelia Research Campus, is already helping researchers untangle brain circuits in mice and primates. Someday, it might lead to more targeted treatments in humans for conditions such as epilepsy or pain, Sternson and his colleagues report March 14, 2019, in the journal Science.

Other scientists working on this approach, called chemogenetics, “often use molecules that would not be appropriate for human therapy,” Sternson says. “It’s still many steps to the clinic, but we’re trying to shorten that route.”

Chemogenetics has been around for about two decades: scientists have designed matched pairs of drugs and receptors that can change the activity of neurons in mice. Sternson’s system uses a drug that gets into the brain and is already approved in humans. And it targets ion channel proteins, which influence neuron activity directly, so there’s less potential for side effects. That might make it viable for eventual clinical use, he says—a barrier that chemogenetic tools haven’t yet hurdled.

“These are the most potent chemogenetic receptors described so far,” Sternson says. Even low doses of varenicline—well below the level used for smoking cessation—can have a big effect on neural activity.

For now, scientists can use the system to draw connections between neural activity and an animal’s behavior. Sternson’s team has also engineered varenicline variants that are even better at targeting proteins and work at even lower doses than the original.

“For research applications, you want the most selective tool possible,” Sternson says.

Down the road, the ability to selectively turn cells on or off could fuel more precise treatments for certain diseases. For example, some patients with severe epilepsy have surgery to remove the affected part of the brain. Drugs that target only neurons in this region could be a less invasive way to treat these patients. Sternson also envisions future pain treatments that send drugs only to an injured area, rather than to the entire body. This is important for reducing the incidence of addiction to painkillers, he says.