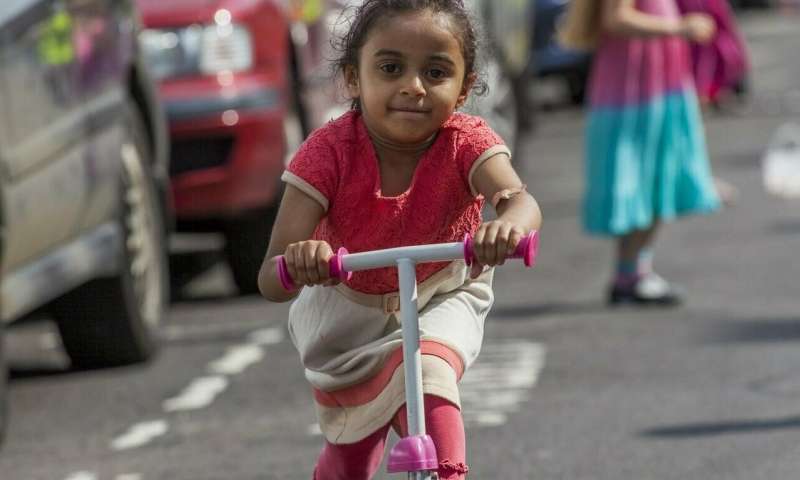 In the 1970s and 80s it was normal for children to ‘play out’ on the street in British towns and cities. However nowadays young people are far more likely to spend their time indoors, inactive and isolated.

As a result, children’s physical activity levels are at an all-time low, with only one in five children getting the minimum recommended 1 hour a day of moderate to vigorous physical exercise.

However, for the last 10 years a grassroots organisation called ‘Playing Out’ has been working hard to change this, allowing children across the UK to take back their streets.

In an upcoming special edition of the Routledge journal Cities & Health, Alice Ferguson writes about why and how she, with other local parents, first set up ‘Playing Out’.

“I grew up in the city, and a lot of time was spent just playing out with friends, on my own street and around the neighbourhood. This was the norm for most children in the 1970s. At the time, it was just about getting out of the house and having fun, but without realising it we were also getting a lot of physical activity, developing resilience and social skills, getting to know our local ‘patch’ and gaining independence.”

“A group of parents in my neighbourhood felt strongly that we wanted our children to have the same freedom and sense of belonging in their community that we’d had in our own childhoods. We looked around and realised that playing out was no longer normal—so we decided to do something about it.”

In 2009 Ferguson and her neighbours decided to create a temporary ‘play street’ for a few hours one day after school. They formally closed their road to through traffic using the council’s existing road closure procedure.

The following summer, the group ran a pilot where they supported other residents on six local streets to do the same, allowing more children to play outside. Local politicians got behind the idea, and the council developed a ‘Temporary Play Street Order’ (TPSO), which allowed residents to apply for a whole year’s worth of regular closures in one go.

Since then, 59 other UK councils have followed suit, enabling over 800 street communities across the UK to organise regular playing out sessions, directly benefiting an estimated 24,000 children. Playing Out supports all this through providing free advice and resources for residents, councils and community organisations, as well as building a peer-support network of parents and ‘activators’ around the country.

In Cities & Health, Ferguson writes about the impact that ‘Playing Out’ has had on children’s lives and their communities. Research by Bristol University has shown that Playing Out has raised kids’ physical activity levels—children are three to five times more active when playing out than they would be on a ‘normal’ day after school; brought neighbourhoods together; reduced social isolation; and helped residents become more actively involved in their communities.

Perhaps the most notable impact of Playing Out has been to change the way people view children’s right to play on their street. Through media coverage and direct engagement with communities, this parent-led movement has made children playing out more visible and ‘normal’, removing some of the barriers preventing parents from allowing their children to play outside.

However, to continue this momentum of cultural change, Ferguson believes policies are needed that will make streets, estates and neighbourhoods safer places for children to play on a more permanent basis.

“We only ever intended this model as an interim, emergency measure. Being able to play out on your own street once a week or once a month, closely supervised by adults, is a poor replacement for ‘real’ playing out; the freedom to just go out your front door, meet up with your mates, have an adventure and come home when dinner is ready. Our long-term vision is for all children to have the freedom to play out where they live, every day.”