It seems like every week there’s a new dress code implemented at a school — but this time around, we’re learning about a school that’s put in place a new dress code targeting parents. The school is currently making headlines for its parent dress code after a mother named Joselyn Lewis — wearing a headscarf and a T-shirt dress — alleged she was turned away for her outfit and could not enroll her child.

Lewis told KPRC News, “They refused me access to the premises because of what I had on. I mean, I didn’t understand why my headscarf and my dress would conflict with me enrolling someone in school.”

We’ve covered a lot of outdated dress codes that target girls, but the dress code of James Madison High School of Houston, Texas, is a different beast, smacking unpleasantly of racism and classism. It forbids access to parents who show up on its campus wearing “jeans that are torn from your buttocks (behind) to all the way down showing lots of skin” and parents who are wearing “very low cut tops or revealing tops that you can see your busts (breasts).” The code also details other supposed fashion crimes that would not be tolerated in parents: hair rollers, leggings, flannel PJs, satin hair caps, shower caps, or bonnets. “Daisy Dukes and low rider shorts,” “dresses that are up to your behind,” and “men wearing undershirts” will all be denied entrance to James Madison as well. 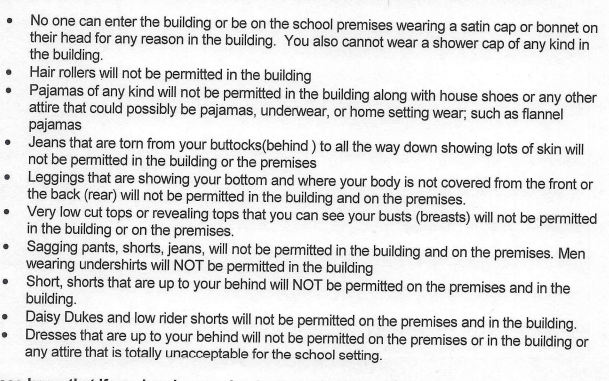 The dress code is described in detail in a letter that was sent home from the principal of James Madison High School, Carlotta Outley Brown, after news broke of the Lewis being unable to enroll her child. Outley Brown explained in the letter that the school’s decision on parental dress comes from wanting to set a solid example for its students. Outley Brown stated in that letter, “Parents, we do value you as a partner in your child’s education. You are your child’s first teacher.”

She continued, “We are preparing your child for a prosperous future. We want them to know what is appropriate and what is not appropriate for any setting they may be in. This is a professional educational environment where we are teaching our children what is right and what is correct or not correct.”

The dress code, however, is suspect, with many calling it flat-out discriminatory or classist, as many women of color use satin or silk scarves and caps to protect the texture of their hair.

Plenty parents are angry about the code. CNN reports that Rosemary Young was wearing a satin cap on her hair when she arrived at the school to pick up her son. She was promptly given a leaflet detailing the new parent dress code, and it did not sit well with her. Young said to CNN’s KTRK, “It doesn’t matter how a parent should come. If we come here belligerent, out of control, things of that nature… but what I wear should never be an issue. I’m not revealing. I’m not doing anything… ”

Lewis told KPRC News that her hair was, in fact, in the process of being done — and she had no intention of wearing it uncovered. “I’m not saying that it’s a part of my religion, but it could have been, but I just wanted to have it up. Who are you to say that I can’t wear my hair up? In a scarf? Who are you to tell me how to dress?” Lewis asked.

When it comes to addressing discriminatory dress codes for students, we’ve stressed the need for schools to examine their motives — and stop the repressive old thinking that girls are sex objects that “distract” male students:

This is a newly disturbing dialogue, however. What rights do schools have when it comes to policing the parents’ dress, and what discussions need to happen to ensure non-discriminatory language and code are adopted?

Zeph Capo, the president of the Houston Federation of Teachers, believes that the James Madison High School is out of line and needs to re-address its demands of parents, according to CNN. “Having body parts exposed is one thing. Turning someone away because their hair’s in rollers… is a little ridiculous… Some of that stuff seems a little classist,” Capo said.

Whoopi Goldberg weighed in on the edict on The View. “If you have five kids, you might not have time to take your hair down, if you want to get them all to different schools. UH UH,” said Goldberg, obviously disgusted. “You can have that conversation with parents, but you don’t send a letter.”

We kind of love this tweet, we can’t lie:

We think the discussion is just getting started on this one. Buckle up.