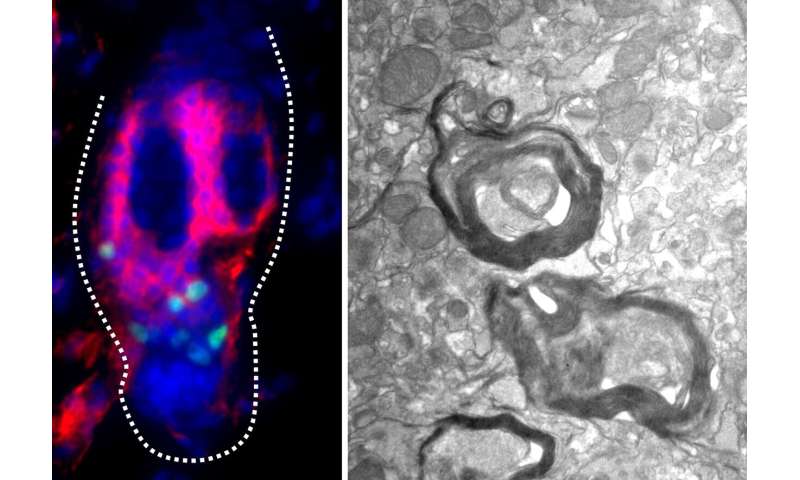 A subset of the stem cells in hair follicles have the potential to regenerate the coating that insulates neurons in mice, reports Thomas Hornyak of the VA Maryland Health Care System and the University of Maryland School of Medicine and colleagues, in a new study published 24th April in PLOS Genetics. The study offers a new direction for finding therapeutic options for certain neurodegenerative diseases.

Hair and skin take on varying shades of red, brown, black and yellow due to the pigments produced by cells called melanocytes. Melanocytes originate embryonically from cells called neural crest cells, which are cells that can also give rise to neurons and their supporting glial cells. Previously, Hornyak and colleagues identified two different pockets of stem cells that create melanocytes inside mature hair follicles. In the current study, they show that the two groups of the melanocyte stem cells can be identified and separated based on whether they are coated in a glycoprotein called CD34, a surface molecule which is present on other types of stem cells, including stem cells of the blood.

Using hair follicles from mice, the researchers isolated the two populations of melanocyte stem cells and grew them in culture. They were surprised to find that the cells carrying CD34 turn into glial cells. In the nervous system, glial cells coat neurons with a fatty insulation called myelin, which increases the speed that nerve impulses can travel. Furthermore, the researchers discovered that the CD34-positive stem cells could regenerate myelin on neurons, both in cell cultures and when injected into mice carrying a genetic defect that prevents them from forming myelin sheaths.